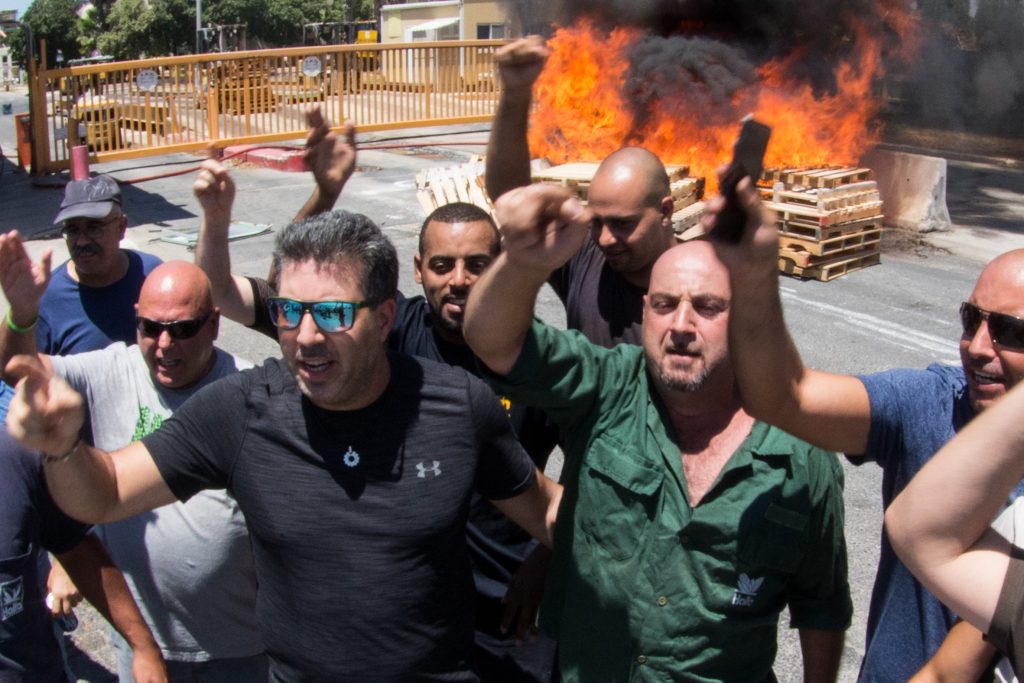 If some solution is not found for the 800 workers who are to be fired from Haifa Chemicals, all unionized companies will go on strike next week, said Histadrut head Avi Nissenkorn. “Hundreds of families and the entire economy of Israel will pay a heavy price” for the closure of the company. “I expect both sides, including government and company officials, to find an immediate solution. The Histadrut will lend a hand to any effort that can save the jobs and careers of these workers,” Nissenkorn said.

Since the announcement of the closure Wednesday, hundreds of workers have conducted a round-the-clock protest outside the company’s Haifa headquarters, although 300 said they would go to work Thursday and not attend the protests. On Wednesday night, workers barricaded themselves inside the plant and locked it from the inside. Protests continued throughout the night, with workers burning tires and pledging to remain where they are until they are assured of their futures.

Eli Elbaz, head of the Haifa Chemicals Workers Committee, told Yisrael Hayom that the firm “was using workers in a very cynical manner. The company had more than enough time to find solutions to avoid a situation like this, but they did nothing. If the current management cannot handle the job of importing and distributing ammonia, let them return their license to do so to the state and allow someone else to do it.”

In the wake of ongoing pressure — and a High Court decision — to close the company’s Haifa ammonia storage facility, Haifa Chemicals owner James Trump said that the company would cease operations in Israel. In a letter to Prime Minister Binyamin Netanyahu, Trump said that the company could not handle the financial burden imposed on it by the High Court to drain the storage vats of ammonia located in Haifa Bay without suitable alternatives — which the government, after years of discussion, has still not provided or even planned for. “If the government is unable or unwilling to fulfill its role as a regulator and provide the means by which Israel’s fertilizer and other ammonia-dependent industries can survive, we certainly are unable to do so,” Trump wrote to the prime minister.

The company has been under pressure to close the facility for years, as government committees and environmental activists accused the company of maintaining an unsafe facility that could leak or, in the case of a war, be bombed by enemy missiles and release large amounts of the chemical into the air. The matter has been a cause celebré for environmental groups for decades, who have organized many petitions, protests and marches over the years to move the facility.

In 2013, the Environment Ministry approved a plan to move it to a less-populated area of the Negev, because of fears that a leak or other incident could endanger the health and lives of the 800,000 residents of the region. However, despite plans being submitted, no final decision has yet been made on where exactly to store the ammonia.

In February, the High Court issued its first closure order for the facility, an order that has been delayed until September 18th. A report issued in January by the Technion said that the presence of the ammonia storage tanks in a concentrated area of population like Haifa was extremely dangerous. The structures were old, and could leak or collapse altogether, and they were a prime target for terrorists, the report said. Last year, Hezbollah chief terrorist Hassan Nasrallah said that the Haifa storage facilities were on Hezbollah’s target list. “It would have the same effect as an atomic bomb, according to the Israelis themselves,” Nasrallah told supporters. “They have 15,000 tons of ammonia there. If one of our missiles would hit that site, it would mean the deaths of tens of thousands — just like with a nuclear weapon.”

At the time, Haifa Mayor Yona Yahav, who together with many local residents and activists has long sought the removal of the ammonia storage facilities, praised the court for its “bravery” in ordering the closure of the facility. “This is an important achievement in a struggle that has stretched over many years. We will not stop until all the ammonia is removed from Haifa Bay.” Yahav called the Technion report “frightening. The way ammonia is imported and stored, including the ships that are used and the storage facilities they are kept in, constitutes an immediate threat for a catastrophic incident that could, r”l, end in death and injury or damaged health to hundreds of thousands of Israelis.”

Commenting on the decision Wednesday, Shraga Brosh, the head of the Israel Industrialists Association, said that it was “a sad day for Israeli industry. We could easily have worked out a solution to the company’s problems. We cannot have a situation where we do not have a steady supply of ammonia for industry. As a result of this situation, the entire Israeli chemical industry — an advanced industry worth hundreds of millions of dollars — is in danger. I feel terrible for the workers, who, because of the government’s failure to address ‘green populism’ which bullied this company, will now have to find new jobs.”

In a statement of its own Wednesday, the Haifa Municipality said that “the closure of the ammonia facility is a victory of justice over corruption, a victory of the public interest over the interests of the ‘fat cats.’ If Haifa Chemicals had not waited many years and ignored the government decision in 2013, and if it had acted responsibly, we would not be facing this dilemma today.”