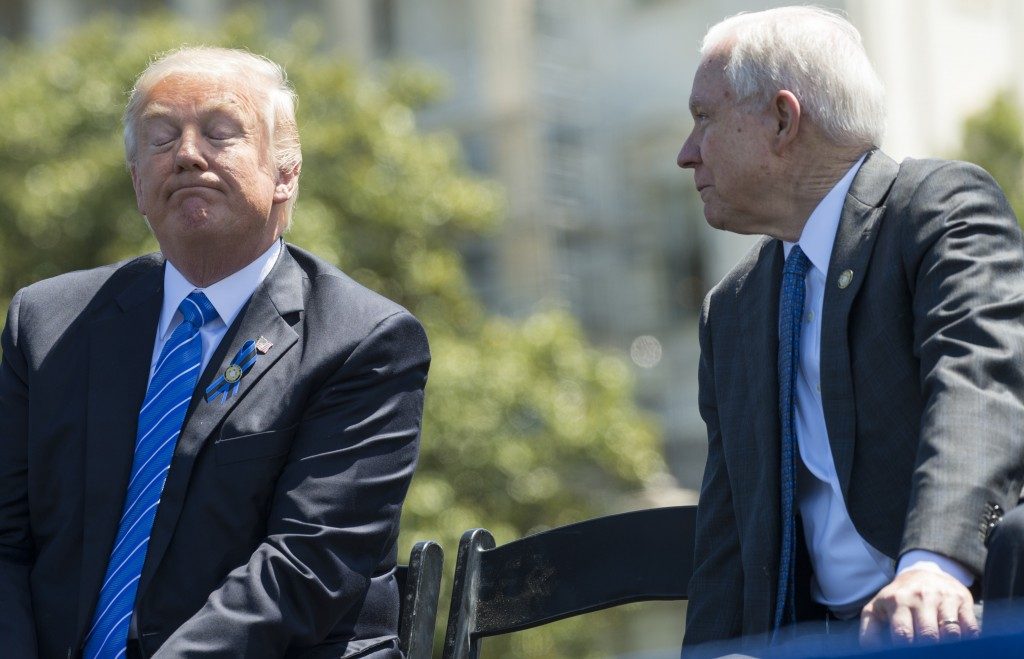 Transparency, thy name is Trump, Donald Trump. No filter, no governor, no editor lies between his impulses and his public actions. He tweets, therefore he is.

Ronald Reagan was so self-contained and impenetrable that his official biographer was practically driven mad trying to figure him out. Donald Trump is penetrable, hourly.

Never more so than during his ongoing war on his own attorney general, Jeff Sessions. Trump has been privately blaming Sessions for the Russia cloud. But rather than calling him in to either work it out or demand his resignation, Trump has engaged in a series of deliberate public humiliations.

Day by day, he taunts Sessions, attacking him for everything from not firing the acting FBI director (which Trump could do himself in an instant) to not pursuing criminal charges against Hillary Clinton.

What makes the spectacle so excruciating is that the wounded Sessions plods on, refusing the obvious invitation to resign his dream job, the capstone of his career.

Trump relishes such a cat-and-mouse game and, by playing it so openly, reveals a deeply repellent vindictiveness in the service of a pathological need to display dominance.

Dominance is his game. Doesn’t matter if you backed him, as did Chris Christie, cast out months ago. Or if you opposed him, as did Mitt Romney, before whom Trump ostentatiously dangled the State Department, only to snatch it away, leaving Romney looking the foolish supplicant.

Yet the Sessions affair is more than just a study in character. It carries political implications. It has caused the first crack in Trump’s base. Not yet a split, mind you. The base is simply too solid for that. But amid his 35 to 40 percent core support, some are peeling off, both in Congress and in the pro-Trump commentariat.

The issue is less characterological than philosophical. As Stephen Hayes of The Weekly Standard put it, Sessions was the original Trumpist — before Trump. Sessions championed hard-line trade, law enforcement and immigration policy long before Trump rode these ideas to the White House.

For many conservatives, Sessions’ early endorsement of Trump served as an ideological touchstone. And Sessions has remained stalwart in carrying out Trumpist policies at Justice. That Trump could, out of personal pique, treat him so rudely now suggests to those conservatives how cynically expedient was Trump’s adoption of Sessions’ ideas in the first place.

But beyond character and beyond ideology lies the most appalling aspect of the Sessions affair — reviving the idea of prosecuting Clinton.

In the 2016 campaign, there was nothing more disturbing than crowds chanting “lock her up,” often encouraged by Trump and his surrogates. After the election, however, Trump reconsidered, saying he would not pursue Clinton who “went through a lot and suffered greatly.”

Now under siege, Trump has jettisoned magnanimity. Maybe she should be locked up after all.

This is pure misdirection. Even if every charge against Clinton were true and she got 20 years in the clink, it would change not one iota of the truth — or falsity — of the charges of collusion being made against the Trump campaign.

Moreover, in America we don’t lock up political adversaries. They do that in Turkey. They do it (and worse) in Russia. Part of American greatness is that we don’t criminalize our politics.

Last week, Trump spoke at the commissioning of the USS Gerald R. Ford aircraft carrier. Ford was no giant. Nor did he leave a great policy legacy. But he is justly revered for his decency and honor. His great gesture was pardoning Richard Nixon, an act for which he was excoriated at the time and which cost him the 1976 election.

It was an act of political self-sacrifice, done for precisely the right reason. Nixon might indeed have committed crimes. But the spectacle of an ex-president on trial and perhaps even in jail was something Ford would not allow the country to go through.

In doing so, he vindicated the very purpose of the presidential pardon. On its face, it’s perverse. It allows one person to overturn equal justice. But the Founders understood that there are times, rare but vital, when social peace and national reconciliation require contravening ordinary justice. Ulysses S. Grant amnestied (technically: paroled) Confederate soldiers and officers at Appomattox, even allowing them to keep a horse for the planting.

In Trump World, the better angels are not in evidence.

To be sure, Trump is indeed examining the pardon power. For himself and his cronies.