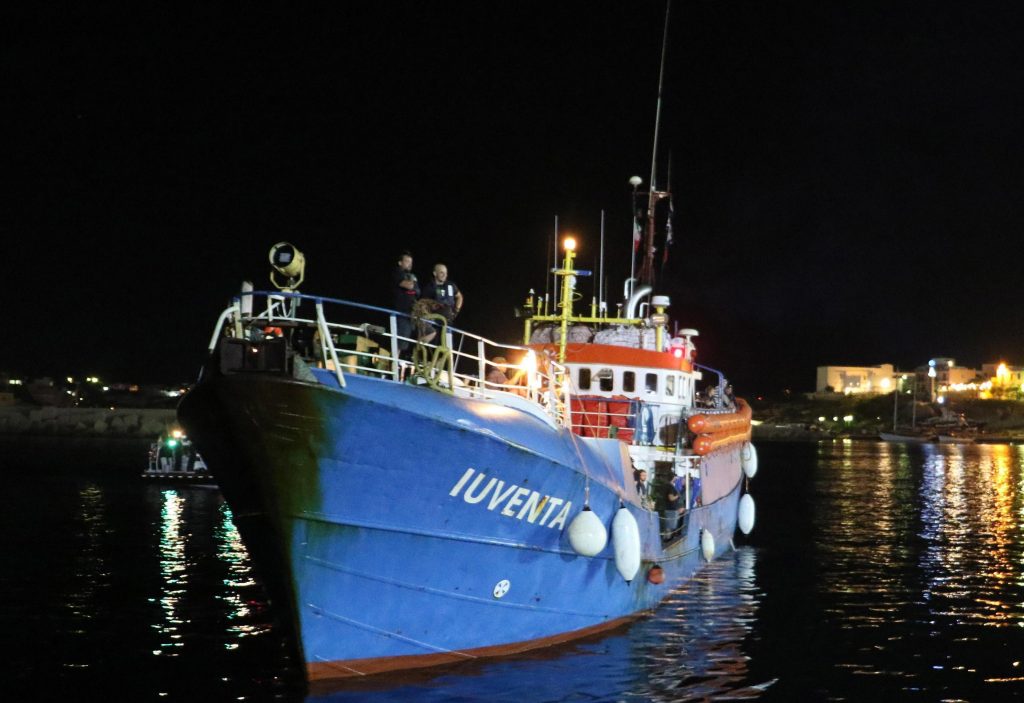 The vessel operated by Jugend Rettet was seized in the port of Lampedusa, a tiny fishing island off Sicily, where many of the hundreds of thousands of migrants rescued at sea in the last few years are taken.

While investigators suspect that “the crime of clandestine immigration” was committed by some of the Jugend Rettet boat’s crew, prosecutor Ambrogio Cartosio told reporters that “my personal conviction was that the motive is humanitarian, exclusively humanitarian.”

The preventive seizure of the Dutch-flagged Iuventa was based on evidence that emerged from three episodes in which crew members had contact with human smugglers operating boats crowded with migrants, Cartosio said. One happened in September 2016, two in June.

“There were contacts, meetings, understandings,” between the group’s boat and the smugglers, the prosecutor, who is based in the Sicilian port city of Trapani, said.

The passengers on the human traffickers’ boats “weren’t saved” by the Iuventa, he alleged. Instead, migrants “were handed over” to the German group’s 33-meter (about 110-foot) -long boat by smugglers who escorted the migrants toward the Iuventa, the prosecutor said.

Later the migrants were transferred to Italian military vessels or other nonprofit vessels to be taken to Italian ports, Cartosio said.

Police in Trapani said the Iuventa “is regularly devoted to the rescue of migrants near the Libyan coast” and that an investigation opened in October has uncovered information to suggest the vessel was used “to aid and abet clandestine immigration.”

Jugend Rettet, a group based in Berlin, is mainly made up of young volunteers. Its web site says its volunteers’ “motivation derives from the will to rescue lives and to improve the humanitarian situation on the Mediterranean.”

The group said on its social media page Wednesday that it went to Lampedusa on instructions from the Rome-based maritime rescue coordination center after being asked to help in a search-and-rescue mission on Tuesday.

“As it happened during other stops at this port, the crew was questioned by the local police, which also entered the ship,” Jugend Rettet said. After a warrant-authorized search of the ship, authorities seized the Iuventa, which will eventually be taken to the main island of Sicily.

Cartosio stressed that no individual members of the crew had been charged and the investigation was ongoing to see which of them might have made contact with smugglers at sea.

“There is no indication (the crew) was paid,” by smugglers, “nor is there any element to make us think there is a stable tie between the ship and Libyan traffickers,” Cartosio said.

Any allegation that contacts between Jugend Rettet’s boat and the boats transporting migrants resulted from “coordinated planning” is tantamount to “science fiction,” Cartosio said.

A judge in Trapani ordered the preventive seizure upon prosecutors’ request.

A few months ago, prosecutors in Trapani and in Catania, another Sicilian city, said they suspected some non-governmental organizations which rescue migrants were also essentially aiding traffickers.

Jugend Rettet was one of several NGOs which declined this week to sign on to new rules promoted by Italy’s interior minister and aimed at ensuring that rescue groups don’t end up effectively helping human traffickers.

The smugglers crowd flimsy rubber dinghies or aging fishing boats with migrants, essentially counting on European or Italian military patrol boats, NGO rescue vessels or passing cargo ships to pluck the passengers to safety and bring them to Italian shores.

Objections to the new rules included fears that armed Italian military or police personnel would come aboard the NGO vessels, compromising the groups’ humanitarian missions.

With elections due in 2018, Premier Paolo Gentiloni’s center-left government is becoming bolder in trying to hold back the tide of migrants entering Italy. Many Italians have grown impatient with the number of newcomers awaiting decisions on asylum requests in their communities.

A spokesman for the Libyan navy, Ayoub Gassim, told The Associated Press the Italians will provide “technical assistance” at Libya’s request and that a patrol boat arrived in Tripoli Wednesday.