Business Hundreds Show Up for Jobs at Amazon Warehouses in U.S. Cities
Business 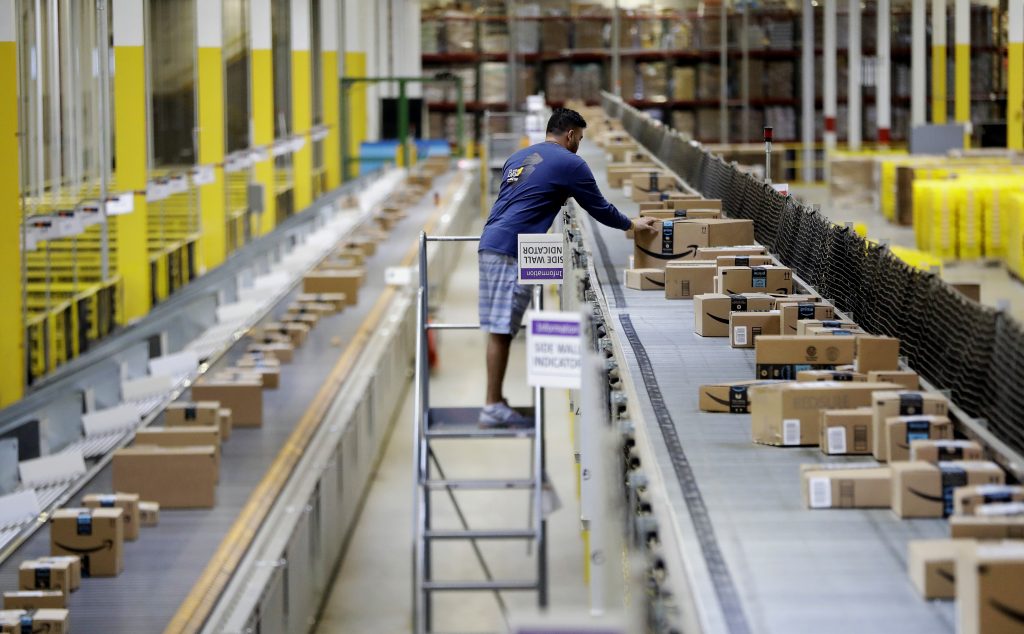 Hundreds of people showed up Wednesday for a chance to pack and ship products to Amazon customers, as the e-commerce company held a giant job fair at nearly a dozen U.S. warehouses.

Though it’s common for Amazon to ramp up its shipping center staff in August to prepare for end of year shopping, the magnitude of the hiring spree underscores Amazon’s growth when traditional retailers are closing stores — and blaming Amazon for a shift to buying goods online.

Amazon planned to hire thousands of people on the spot. Nearly 40,000 of the 50,000 packing, sorting and shipping jobs at Amazon will be full-time. Most of them will count toward Amazon’s previously announced goal of adding 100,000 full-time workers by the middle of next year.

The bad news is that more people are likely to lose jobs in stores than get jobs in warehouses, said Anthony Carnevale, director of Georgetown University’s Center on Education and the Workforce.

On the flip side, Amazon’s warehouse jobs provide “decent and competitive” wages and could help build skills.

“Interpersonal team work, problem solving, critical thinking, all that stuff goes on in these warehouses,” Carnevale said. “They’re serious entry-level jobs for a lot of young people, even those who are still making their way through school.”

The company is advertising starting wages that range from $11.50 an hour in Chattanooga, Tennessee, to $13.75 an hour in Kent, Washington, near Amazon’s Seattle headquarters. The $11.50 rate amounts to about $23,920 a year. In Washington state, the current minimum wage is $11.50 but by 2020 this will increase to $13.50. By comparison, the warehouse store operator Costco raised its minimum wage for entry-level workers last year to $13 to $13.50 an hour.

Many of the job candidates Wednesday were looking to supplement other income.

Rodney Huffman, a 27-year-old personal trainer, said the $13-an-hour job in Baltimore would pay enough to help cover bills while he starts his own company.

“I’m looking to do the night shifts and then run my own company during the day,” he said.

At one warehouse — Amazon calls them “fulfillment centers” — in Fall River, Massachusetts, the company hired 30 people on the spot in the first two hours. Amazon was looking to hire more than 200 people Wednesday, adding to a workforce of about 1,500. Employees there focus on sorting, labeling and shipping what the company calls “non-sortable” items — big products such as shovels, surfboards, grills, car seats — and lots of giant diaper boxes. Other warehouses are focused on smaller products.

While Amazon has attracted attention for deploying robots at some of its warehouses, experts said it could take a while before automation begins to seriously bite into its growing labor force.

“When it comes to dexterity, machines aren’t really great at it,” said Jason Roberts, head of global technology and analytics for mass recruiter Randstad Sourceright, which is not working with Amazon on its jobs fair. “The picker-packer role is something humans do way better than machines right now.”

Steve King, 47, a job candidate in Fall River, agreed: “I don’t think robots are up to snuff yet. I think they will be. Hopefully I can get in before the robots get that good and get above the robots in administration or something.”

In recent years, reports have emerged about difficult working conditions at Amazon’s warehouses, including deaths at two Amazon warehouses in 2014. The company also came under fire in 2011 for extreme heat in its warehouses that caused “heat-related injuries” among workers. Amazon said at the time that it took emergency actions during heat waves and subsequently installed cooling systems in its warehouses.

But those who showed up Wednesday were excited by the prospects of health insurance and other benefits, as well as advancement opportunities.

“I like to be busy, so I know Amazon is busy and they want hard workers,” retired police officer Brian Trice said.

Trice was among those who stood in line in Baltimore on a hot day, as Amazon contractors passed out bottles of water and an ice cream truck played music nearby. In Fall River, a line snaked out of the warehouse and under a tent.

Amazon is “insatiable when it comes to filling jobs at warehouses,” Roberts said. He said Amazon’s job offers could also help drive up wages at nearby employers, including grocery stores and fast-food joints.

“It has a relatively healthy effect in the surrounding area,” he said.