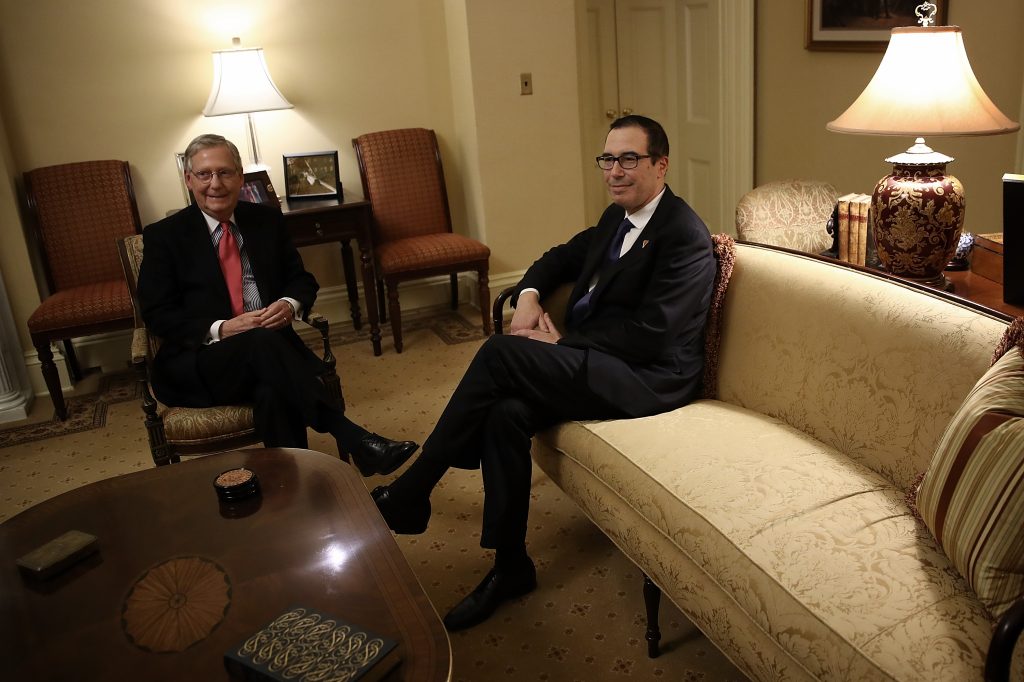 The White House’s push to quickly pass a major package of tax cuts through Congress is facing a fall calendar full of legislative land mines, potentially delaying a key part of President Donald Trump’s agenda into at least 2018.

The Trump administration sees tax cuts as an achievable victory after a string of failed attempts to pass other parts of the president’s legislative agenda, as well as a proposal that could unite a party fractured over Senate Republicans’ failure last week to vote through a repeal of parts of the Affordable Care Act.

“We’re unleashing a new era of American prosperity perhaps like we have never seen it before,” he said at the meeting.

Republican leaders in Congress, however, face a pair of deadlines that are delaying any action on taxes. The current budget is set to expire at the end of September, and unless Congress approves new funding, there will be a partial government shutdown that will close national parks and put hundreds of thousands of federal workers on unpaid leave.

Congress’s most immediate concern, however, is the debt ceiling, which the Treasury Department says must be raised by Sept. 29 to ensure that the government can pay its bills. Failing to raise the ceiling could spark a global financial crisis, leading to a stock market crash, a spike in interest rates and a potential economic recession.

The Senate and House are scheduled to be in session together for a total of just 12 days from now until the debt ceiling deadline, giving them little time to focus on tax cuts.

Republican leaders face several challenges as they seek to avert a government shutdown or default.

Treasury Secretary Steven Mnuchin met with Senate Majority Leader Mitch McConnell (R-Ky.) and Senate Minority Leader Charles Schumer, (D-N.Y.), pressing them to raise the borrowing limit as soon as possible. But the talks ended without progress or even a clear sense of what the Senate leaders must do to deliver votes to raise the limit, according to three people briefed on the meeting who spoke on the condition of anonymity to talk candidly about the private discussions.

Some more-conservative Republicans are demanding that any increase in the debt ceiling — a legislative limit on how much the government can borrow — come coupled with broad plans to cut spending and shrink the federal government, provisions that would probably preclude any Democratic support for the increase.

In 2015, the last time the debt ceiling was raised, the majority of votes to pass the measure came from Democrats after conservatives objected to increasing the limit without spending cuts, despite pleas for cooperation from GOP leaders. That dynamic has not changed, and Democrats believe they still have significant leverage in any negotiations on the borrowing limit.

On the budget, Democrats have said they will not agree to any spending bill that includes money for a wall along the U.S.-Mexico border, but the White House has said repeatedly that it wants that funding to be part of a spending bill.

Lawmakers could approve a short-term spending bill to give themselves more time to negotiate, but that would further postpone any tax discussions because Congress would remain consumed with the budget.

Congress hasn’t overhauled the tax code in 31 years, in part because it is so politically difficult, but White House officials are trying to accelerate talks.