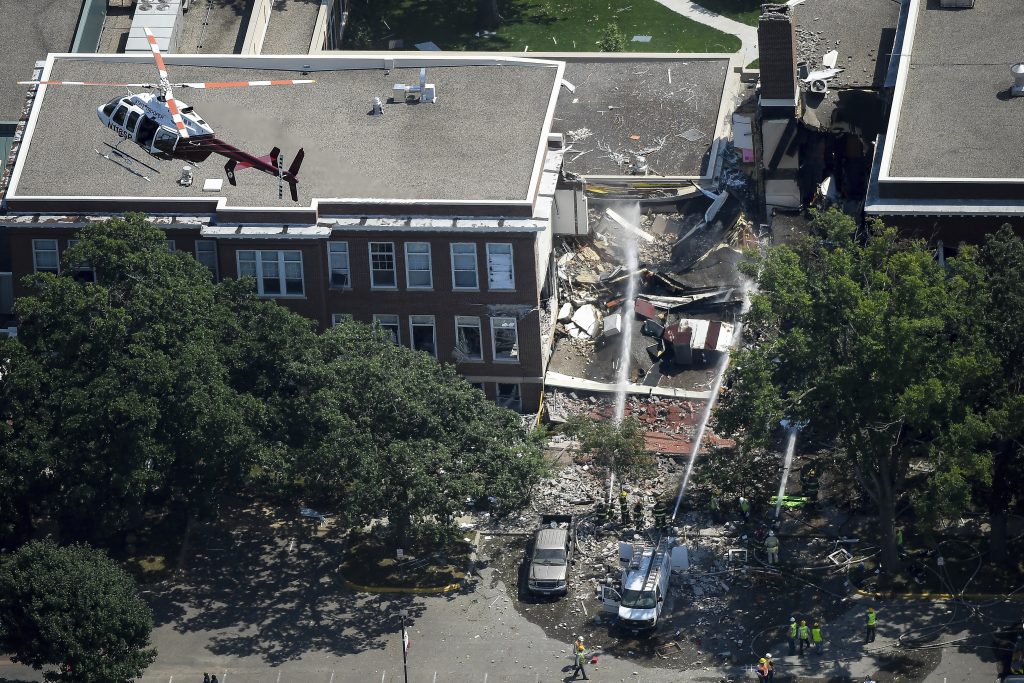 One school staff member has been found dead but another is still unaccounted for following a natural gas explosion Wednesday at a college prep school in Minneapolis, authorities said. Both worked at the school, according to the Minneapolis Fire Department.

The body was found in the rubble of a building that partially collapsed during the blast at the Minnehaha Academy, Minneapolis Fire Chief John Fruetel said during a news conference. The private Christian school serves students from pre-kindergarten through 12th grade.

The Minneapolis Star Tribune later identified the deceased as Ruth Berg, a business office assistant at the school. Berg was engaged to be married, her future brother-in-law Jeff Burrington told the newspaper.

Contractors were doing work on the building at the time of the blast, which investigators determined was caused by a gas explosion, according to Assistant Fire Chief Bryan Tyner.

Seven adults were hospitalized, including three with critical injuries, at Hennepin County Medical Center. They suffered injuries ranging from head injuries and broken bones to cuts from debris, according to Dr. Jim Miner, the hospital’s chief of emergency medicine.

Aerial video footage of the school’s campus showed part of a building crumbled, windows in other areas blown out and shattered, and bricks and other debris scattered about. Tyner said three people were rescued from the roof of the building shortly after the explosion.

The Star Tribune reported that city records show Master Mechanical Inc. was issued a permit on June 7 for “gas piping and hooking up meter” at the school’s address. Ryan Larsen, a company official, released a statement saying the company was monitoring the situation and referred all questions to the Minneapolis Fire Department.

Larsen wouldn’t confirm to The Associated Press that company workers were on site, saying: “We are trying to figure it out.”

Minnehaha Academy has multiple buildings on its campus. The school said the blast only affected the “upper school.”

Tramon Vanleer, who helps coach a summer program, was in that building’s gym with five students when the explosion occurred.

“It sounded like a freight door shutting,” Vanleer told KARE-TV. “At the same time the lights went out and there was some debris that fell from the ceiling, so we just got out as fast as possible.”