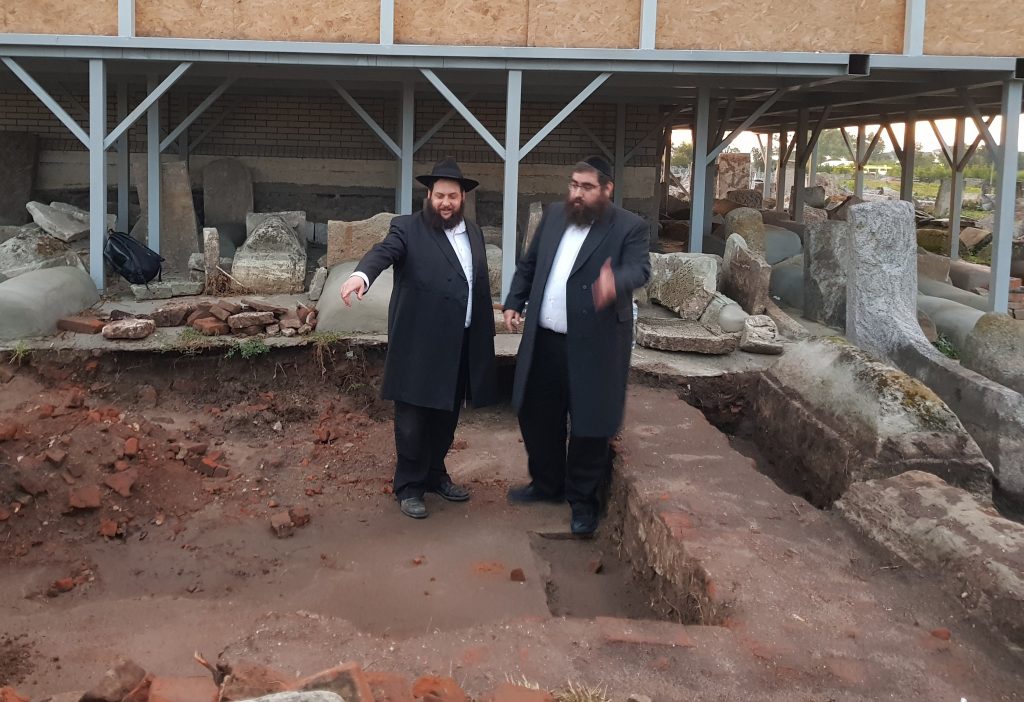 A recent discovery has led to speculation over whether the building constructed to house the resting place of the Kedushas Levi, Harav Levi Yitzchak of Berditchev, zy”a, is indeed in the correct location.

Rabbi Moshe Thaler, director of Chabad of Berditchev, has been in the town whose very name bears a hallowed place in Jewish history, since 2002. Each summer he has made a practice of dedicating time to cleaning up and continuing a project of mapping Berditchev’s Jewish cemetery. His efforts have led to the revelation and restoration of many other kevarim of Jews who once lived in the town, including those of several children of the Kedushas Levi.

Most graves in the cemetery were originally covered by a bed of bricks with a matzeivah placed at the head. When Rabbi Thaler sees the remains of bricks, his routine is to remove dirt in the surrounding area in the hopes of uncovering the original marker. Last week, he came upon something that caught his attention while working in the area directly in back of the Kedushas Levi’s ohel, or structure built around a kever.

“I thought that I had found a matzeivah, so I starting digging to find the edges of it, but the stone just seemed to keep going and going, and I saw that it was something much bigger,” Rabbi Thaler told Hamodia. “When we were finished, we saw the remains of four walls and a cemented floor; it seemed pretty clear that this used to be an ohel.”

The find, which is roughly 17 feet in back of the present ohel, seemed to present a significant possibility that these are indeed the remains of the original structure built around the Kedushas Levi’s kever.

“We are not saying anything either way; the ohel has a chazakah as it has been used for many years already. I do not have the authority to decide that it’s wrong, but we would like to hear from Rabbanim and experts in the field as to what they think this means,” said Rabbi Thaler. “Anything I do with kevarim is with all the hiddurim and chumros; it’s a big responsibility and you don’t want to do anything that, chas v’shalom, could hurt a neshamah.”

Like nearly all kivrei tzaddikim in Ukraine, the kever of the Kedushas Levi lay in ruins for decades and was first reconstructed after the fall of the Soviet Union. The original ohel, which had been built after his petirah in 1809, was destroyed shortly before or during the Second World War.

In a move that was common in towns with kevarim of prominent people, local Jews, fearing that graves would come to be desecrated during Communist rule, covered the area with cement and made a simple marker saying that this was the resting place of the Kedushas Levi.

Twenty-six years ago, when a group from America and Eretz Yisrael decided to build an ohel, they used the concrete slab as their marker for where they presumed the kever was.

“It’s very hard to know what really happened,” said Rabbi Thaler. “The spot is very close to what we found now, so it’s possible that the people who put the cement there 70 years ago made a mistake and this is the real ohel.”

He said that it is known that the present ohel is built over several other kevarim, which could be another clue that the location is not exact, but this could also be a result of it being a larger building than the original.

Rabbi Shlomo Yom Tov Breuer, who has served for many years as Rav of the Berditchev community, was not taken by the find, and said he is “100 percent sure that the ohel is in the right place.”

“The ohel was built directly over the cement, which was put there by people who saw the original one before the war. They knew where it belonged,” he told Hamodia.

The Tehillah l’Dovid, Harav Dovid Ortinberg zt”l, served as chief of the city’s beis din and is known to have been buried there, but the location of his kever is unknown. Rabbi Breuer suggested that the present find is an ohel that might have belonged to him or some other prominent member of the kehillah of Berditchev.

The present structure was hastily built and allowed in constant leaking from the roof. A second, larger building was built around it several years later to protect visitors from the elements, which made the ohel significantly larger than the original. Rabbi Breuer said that this fact is the sole reason why other matzeivos are under the ohel, and that it does not imply that it is in the wrong place.

An additional proof, he added, to the accuracy of the present location is that the actual spot where the Kedushas Levi’s body was placed was left partially outside of the original ohel. The concrete slab reflected this uneven shape.

Rabbi Yaakov Bleich, Chief Rabbi of Ukraine, who has been involved in the restoration of many kivrei tzaddikim in the country, said that he was “skeptical” of the find, but did not rule out the possibility of it being the location of the original ohel.

“I’m not saying that it’s impossible, but it’s hard to imagine that the cement that was put there by people who saw the old ohel, poured it in the wrong place,” he told Hamodia. “Rabbi Thlaer has found a lot of interesting things in Berditchev over the years, and this could be another ohel that existed. There were a lot of tzaddikim who were buried there.”

There are no known original maps of the Berditchev beis hachaim and firsthand accounts have been hard to come by. It is not known whether any additional ohalim existed before World War Two.

Rabbi Thaler said that roughly 100,000 come to the town each year to daven at the kever of the tzaddik, known for his passionate defense of the Jewish People before the Heavenly Court, making the question of the accurate location of broader relevance.

Rabbi Shlomo Wilhelm, the director of Chabad in nearby Zhitomir, viewed Rabbi Thaler’s find, but also said that its significance is for experts to decide.

“No one should be discouraged, for even if what has been found is the real spot, it’s within four amos of the ohel and the whole area is filled with tzaddikim and kedoshim; wherever a person is, his tefillos are heard in Shamayim,” he told Hamodia.

This is hardly the first time doubt has been thrown on the location of a grave in Eastern Europe, where nearly all kivrei tzaddikim have been reconstructed based on piecing together whatever evidence remained after 70 years of Communist rule, interrupted by Nazi occupation.

In one Ukrainian town, a group of visitors to the kever of a well-known tzaddik buried there were puzzled by the fact that the grave was surrounded by matzeivos of women. An investigation revealed that the newly built ohel had mistakenly been constructed over the site of that tzaddik’s Rebbetzin’s resting place, and that his own was located a short distance away. The foundations of his ohel were eventually found and a new one was constructed on that spot.

In Shpetivka, the burial place of Harav Pinchas of Koritz zy”a, the town’s Jews moved many of the remains from the town’s old cemetery to safer locations during World War Two. In the early 1990s, an ohel was constructed around what was believed to be Rav Pinchas’ grave.

Later, Rabbi Yisrael Meir Gabbai, who has re-built many kivrei tzaddikim in Ukraine, heard from residents that the townspeople were afraid to move the tzaddik’s bones and that he remained in the old beis hachaim, which is on the other side of the town. After many years of stymied efforts, Rabbi Gabbai was able to purchase the area of the original cemetery from its owner and a second ohel was constructed there.

One person with extensive experience in re-building kivrei tzaddikim in Eastern Europe said that the work is “very challenging.”

“Those who are trying to save and rebuild kevarim are doing their best, but in many cases they have nothing more than word of mouth and hazy, decades-old recollections to work with. In some cases, there is even conflicting evidence,” he said. “The askanim try very hard to get it right for the sake of the tzaddikim and those that want to daven at their kevarim, but it’s not easy. I think it is safe to assume that in most cases, the newly built ohalim are, at the very least, in proximity to where the original kever was, and it is a most appropriate place for Yidden to daven and for their tefillos to be accepted in Shamayim.”