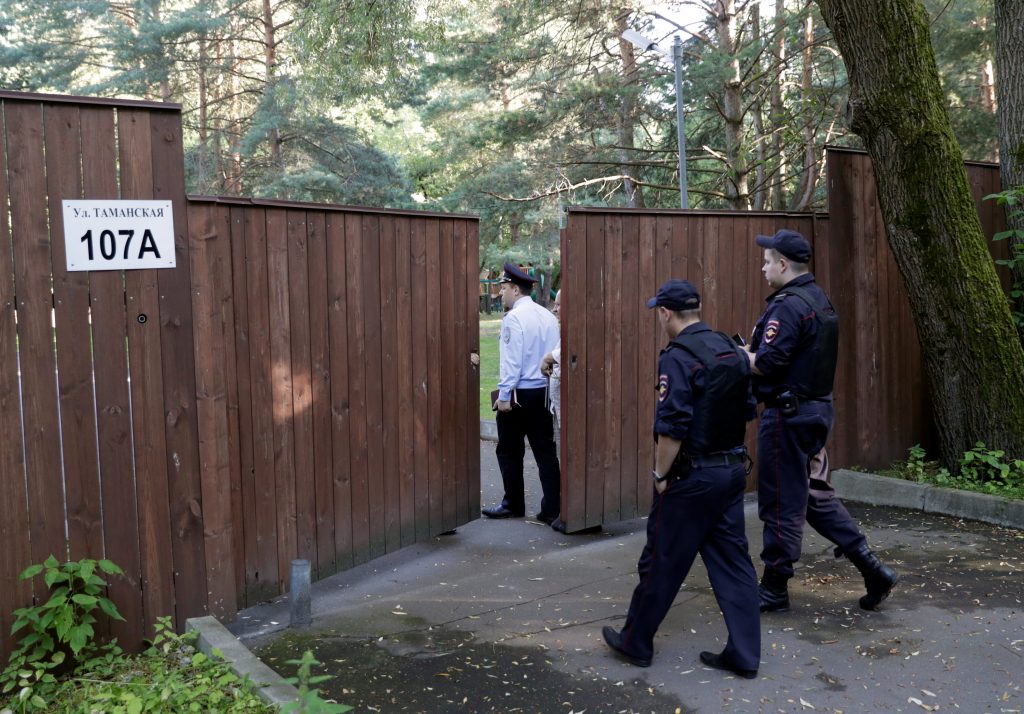 Russia urged the United States Monday to show “political will” to mend ties even as it ordered sweeping cuts of U.S. embassy personnel unseen since Cold War times.

President Vladimir Putin’s spokesman, Dmitry Peskov, said it will take time for the U.S. to recover from what he called “political schizophrenia,” but added that Russia remains interested in constructive cooperation with the U.S.

“We are interested in a steady development of our ties and are sorry to note that we are still far from that,” he said.

Peskov’s statement followed Sunday’s televised comments by Putin, who said the U.S. would have to cut 755 of its embassy and consulate staff in Russia, a massive reduction he described as a response to new U.S. sanctions.

The Russian Foreign Ministry had previously said that the U.S. should cut its embassy and consular employees to 455, the number that Russia has in the United States. Along with the caps on embassy personnel announced Friday, it also declared the closure of a U.S. recreational retreat on the outskirts of Moscow and warehouse facilities.

Moscow’s action is the long-expected tit-for-tat response to former U.S. President Barack Obama’s move to expel 35 Russian diplomats and shut down two Russian recreational retreats in the U.S. over reports of Russian meddling in the 2016 presidential election.

Putin had refrained from an immediate quid-pro-quo until now in the hope that President Donald Trump would follow on his campaign promises to improve ties with Moscow and roll back the steps taken by Obama.

The Russian leader hailed his first meeting with Trump at the sidelines of the Group of 20 summit in Germany earlier this month, saying that the talks offered a model for rebuilding Russia-U.S. ties.

But the Congressional and FBI investigations into links between Trump’s campaign and Russia have weighed heavily over the White House, derailing Moscow’s hopes for an improvement in ties.

The overwhelming endorsement of a new package of stiff financial sanctions that passed Congress with veto-proof numbers last week dealt a new blow to Moscow’s aspirations. The White House said that Trump will sign the package, and Putin decided to fire back without waiting for that to happen.

“We had hoped that the situation will somehow change, but apparently if it changes, it won’t be soon,” Putin said in remarks broadcast by state television late Sunday. “I thought it was the time to show that we’re not going to leave it without an answer.”

The diplomatic personnel reductions are the harshest such move since 1986, when Moscow and Washington expelled dozens of diplomats.

Putin described the cuts in the U.S. embassy and consulate personnel as “painful” and said that Russia has other levers to hurt the U.S. He added, however, that he currently sees no need for further action.

The State Department declined to give an exact number of American diplomats or other U.S. officials in Russia, but the figure is believed to be about 400, some of whom have families accompanying them on diplomatic passports.

The vast majority of the more than 1,000 employees at the various U.S. diplomatic missions in Russia, including the embassy in Moscow and consulates in St. Petersburg, Vladivostok and Yekaterinburg, are local employees.