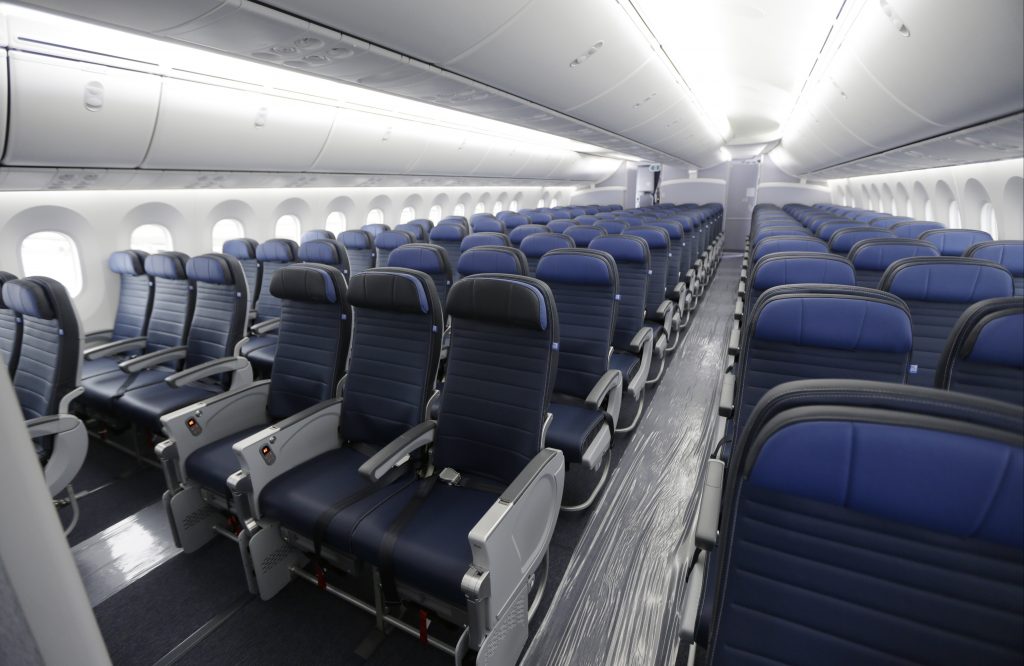 If you’re convinced your plane seat gets smaller with each vacation, that your cramped knees and crushed hips are not just a function of your expanding girth, that you’re being gradually and intentionally squished bit-by-bit like a slowly boiled frog as airlines cram ever more chairs into their fuselages at the expense of the people between them, then — good news!

A federal court agrees that this is indeed happening, and may be a problem or even a danger to life and pretzeled limb.

In a fiery ruling on Friday, an appeals court judge in Washington ordered the Federal Aviation Administration to look into it what she called “The Case of the Incredible Shrinking Airline Seat.”

Judge Patricia Millett upbraided the FAA for “vacuous” and “vaporous” evidence that the agency previously used to argue that diminishing leg room was not a problem — or at least not its problem.

It’s no secret that the big carriers have been shrinking seat space. CNN reported earlier this year that American Airlines was preparing to retrofit its fleet of Boeing 737 Max jets with less room for economy fliers, for example.

United Airlines was reportedly thinking about doing likewise, even as chair-related horror stories scandalize the industry — like the woman who said her arm and leg went numb after she was forced to squeeze her toddler into the seat she already occupied; or the man dragged from an airplane when he refused to yield his few inches of fabric.

Plenty of people have complained about this, of course, from average fliers to members of Congress. In 2015, a large passenger advocacy group called FlyersRights.org asked the FAA to put a stop to it with a formal petition.

The group assembled reports that the average seat width on an airplane had shrunken at least an inch and a half since the early 2000s.

Meanwhile, it argued, the space between you and whoever is kicking the back of your economy-class seat had decreased even more — to as few as 28 inches on some planes.

Airline seats were designed for people no taller than 5-foot-10, and in reasonably good shape, FlyersRights.org argued, noting that “many Americans do not fit into this category.”

Beyond stiff limbs and sore joints, the group argued, all this squishing creates potentially fatal risks — namely blood clots in passengers’ legs, and the possibility that in an emergency, they might not be able to quickly evacuate the cramped confines of a modern airplane.

So the group asked the FAA to impose a moratorium, preventing airlines from shrinking seats any more than they already had while the agency prepared its first-ever regulations on the issue.

The FAA said no.

As summarized by the appeals court, the regulatory agency came up with various reasons to stay out of the seat-space wars.

Blood clots were unlikely to develop, the agency argued, pointing to studies. And anyway, they were no more likely in coach than in first-class.

And modern seats are thinner than they used to be, the FAA contended. So they might even be roomier than their ancestor chairs, despite being packed closer together.

As for evacuations, the FAA said it had looked into the matter, ran its own tests, and all was well.

FlyersRights.org, whose past victories include a rule fining airlines for parking passengers on the tarmac too long, was not content with the agency’s brush off. This year it asked the U.S. Court of Appeals in Washington to force the FAA’s hand.

And while the group didn’t get everything it asked for, its arguments won quite a lot of sympathy from the bench — and earned the FAA a dressing down.

First the bad news (from the perspective of a contorted passenger):

The court refused FlyersRight.org’s request that it order the FAA to set seat space rules. It merely ordered the agency to come up with better arguments against the group’s complaints — and not even all of their complaints.

The FAA had “reasonably concluded that matters pertaining exclusively to passenger ‘comfort’ are not within its regulatory wheelhouse,” Judge Millett wrote.

So to the sore, the stiff and the aching: Too bad. Not the government’s problem.

The court also agreed that blood clots didn’t appear to have anything to do with seat size or spacing. It tossed out the health concerns, too.

But when it came to emergency evacuations — you know, those things a flight attendant reminds you about before every departure — the court agreed with FlyersRights.org that the Incredible Shrinking Airline Seat might be a problem.

The FAA had argued otherwise, the judge wrote, citing studies and internal reviews to contend that seat spacing had no impact on evacuations.

But FAA hadn’t actually shown anyone some of those reports, the judge complained, writing that information “no one can see does not count.”

Other studies the agency relied on were “outdated,” Millett wrote — going back years, to an era when seats were much roomier.

“That type of vaporous record will not do,” she wrote, and added:

“The Administration’s rationale also blinks reality. As a matter of basic physics, at some point seat and passenger dimensions would become so squeezed as to impede the ability of passengers to extricate themselves from their seats and get over to an aisle.”

“The question is not whether seat dimensions matter, but when,” the judge wrote.

So the FAA was ordered by Millett and two other judges on the court to go back and take another look. They didn’t specify a deadline.

The court was clear that the FAA doesn’t necessarily have to stop seats from shrinking — or even regulate the issue.

The federal government just has to come up with better arguments to stay out of the matter — better evidence that those uncomfortable seats aren’t going to trap anyone on a fiery airplane.

Or as Millett put it in her order: “While we do not require much of the agency at this juncture, we do require something.”