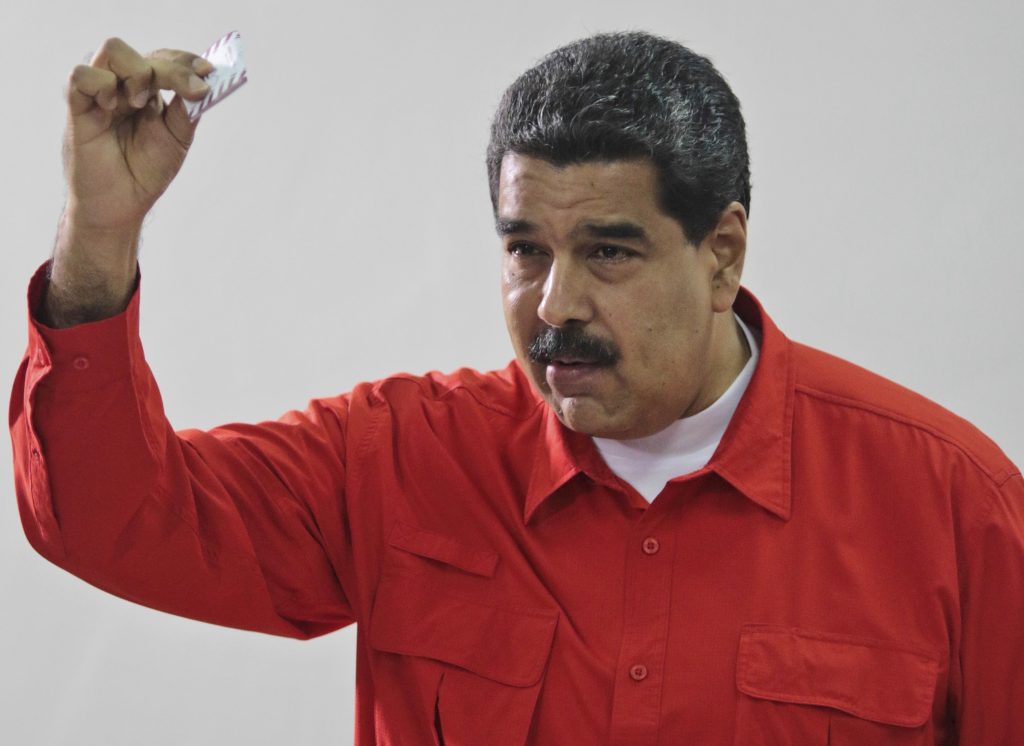 Venezuelan President Nicolas Maduro asked for global acceptance on Sunday as he cast an unusual pre-dawn vote for an all-powerful constitutional assembly that his opponents fear he’ll use to replace his country’s democracy with a single-party authoritarian system.

Accompanied by close advisers and state media, Maduro voted at 6:05 a.m. local time, far earlier and less publicly than in previous elections. The run-up to the vote has been marked by months of clashes between protesters and the government, including the fatal shooting of a 61-year-old nurse by men accused of being pro-government paramilitaries during a protest at a church a few hundred feet from the school where Maduro voted.

Maduro and his socialist administration deny links to violent paramilitaries and say the political opposition is responsible for the violence that has left at least 113 dead and nearly 2000 wounded in four months of protests.

“We’ve stoically withstood the terrorist, criminal violence,” Maduro said. “Hopefully the world will respectfully extend its arms toward our country.”

The Trump administration has imposed successive rounds of sanctions on high-ranking members of Maduro’s administration, with the support of countries including Mexico, Colombia and Panama. Vice President Mike Pence promised on Friday that the U.S. would take “strong and swift economic actions” if the vote went ahead. He didn’t say whether the U.S. would sanction Venezuelan oil imports, a measure with the potential to undermine Maduro but cause an even deeper humanitarian crisis here.

The special assembly being selected Sunday will have powers to rewrite the country’s 1999 constitution but will also have powers above and beyond other state institutions, including the opposition-controlled congress.

While opinion polls say a vast majority oppose him, Maduro made clear in a broadcast address Saturday evening that he intends to use the assembly to govern without limitation, describing the vote as “the election of a power that’s above and beyond every other. It’s the super power!”

He said he wants the assembly to strip opposition legislators of their constitutional immunity from prosecution and jail at least one — Freddy Guevara, a hard-line opposition leader and one of the highest-profile organizers of four months of protests against the government.

“This little Hitler has his cell guaranteed!” Maduro shouted, using his frequent nickname for Guevara.

The opposition is boycotting Sunday’s vote, contending the election has been structured to ensure Maduro’s socialist party continues to dominate. So all 5,500 candidates for the 545 seats in the constituent assembly are his supporters.

The vote’s success will be measured by turnout, with the opposition urging Venezuelans to stay and the government encouraging participation with tactics that include threats to state workers’ jobs and social benefits like subsidized food for the poor.

Maduro indicated he is eager to prosecute many more members of the opposition parties that control a handful of state governments along with the National Assembly, providing one of the few remaining checks on the power of the socialist party that has ruled this OPEC nation for nearly two decades.

“The right wing already has its prison cell waiting,” the president said. “All the criminals will go to prison for the crimes they’ve committed.”

Saying the assembly will begin to govern within a week, Maduro said its first task in rewriting the constitution will be “a total transformation” of the office of Venezuela’s chief prosecutor, a former government loyalist who has become the highest-ranking official to publicly split from the president.

Once one of Latin America’s wealthiest nations, Venezuela has spiraled into a devastating crisis during Maduro’s four years in power, thanks to plunging oil prices and widespread corruption and mismanagement. Inflation and homicide rates are among the world’s highest and widespread shortages of food and medicine have citizens dying of preventable illnesses and rooting through trash to feed themselves.

In April, Maduro’s supporters on the Supreme Court tried to strip the National Assembly of its powers, setting off the protests and clashes between police and demonstrators. Most of the dead have been protesters apparently shot by police and government-linked paramilitaries.

The opposition has organized a series of work stoppages as well as a July 16 protest vote that it said drew more than 7.5 million symbolic votes against the constitutional assembly. It called Saturday for roadblocks to start before dawn Sunday and a mass march on Caracas’ main highway.

“A new stage in the democratic struggle starts tomorrow,” Julio Borges, the president of the National Assembly, said at a news conference called by Democratic Unity, a coalition of some 20 opposition groups. “This new stage will need more courage … street protests will get stronger.”

Opinion polls say more than 70 percent of the country is opposed to Sunday’s vote. But as many as half of all Venezuelans support neither the government nor the opposition — a phenomenon evident in the glum paralysis that has gripped much of the country as protesters and police wage nightly battles.