Technology In Solar Eclipse’s ‘Path of Totality,’ Rooms Go for $1,000 and Vendors Sell Every Trinket Under the Sun
Health, Science & Technology 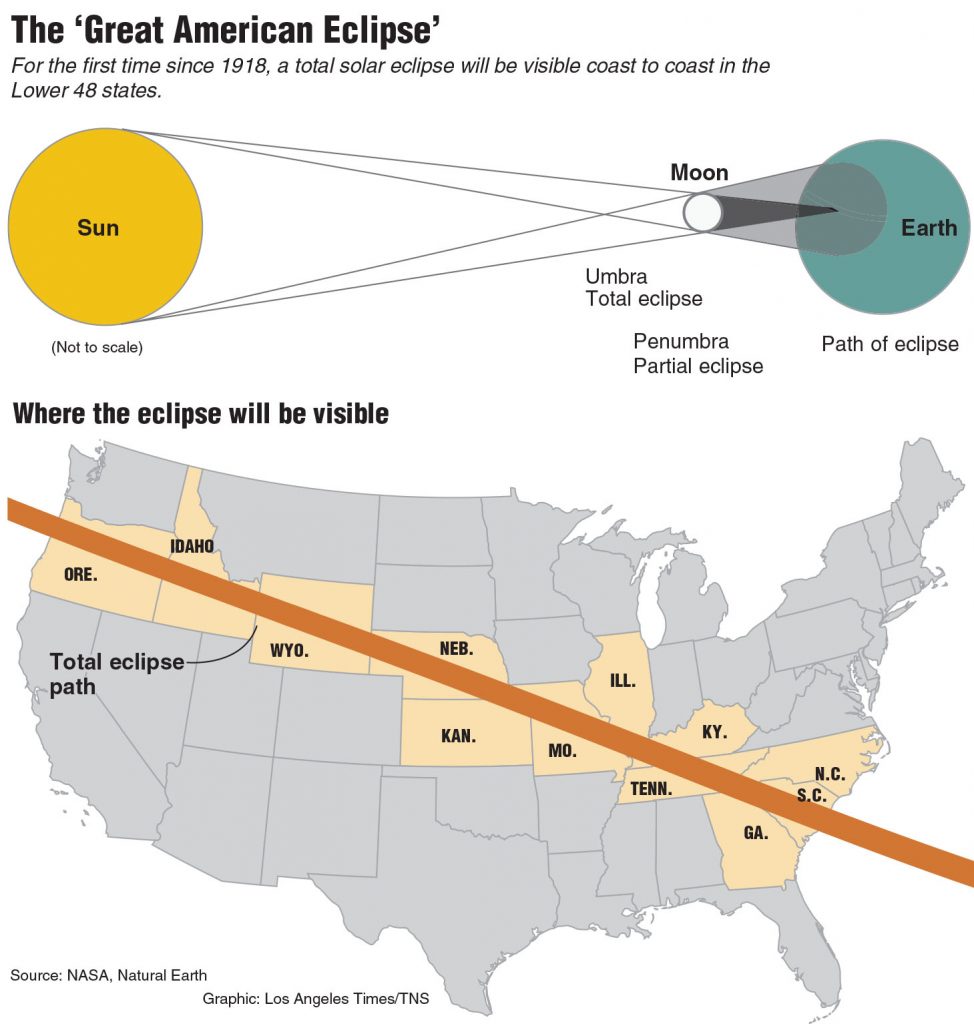 Hotels have been sold out for years. Eclipse viewing glasses are back-ordered on Amazon. People are charging thousands for a one-night stay in their homes. There are T-shirts, mugs, posters, books, iPhone cases, pillows and leggings.

The Great Solar Eclipse is coming, and there’s money to be made.

With more than 12 million people living in the so-called path of totality, and millions more traveling to see the historic Aug. 21 solar eclipse, companies and enterprising individuals are sensing opportunity.

“Of course, people are taking advantage,” said Jaci Hill, who is helping her mother rent her Idaho Springs, Colo., home on Airbnb for $1,000 on the night before the eclipse. “It is definitely a situation of supply and demand.”

Economists say it is difficult to gauge how much revenue will be generated from the eclipse because it is such a rare event — it’s the first total solar eclipse to traverse America in 99 years, and the first time the path of totality will eclipse only over the contiguous U.S. Cities from coast to coast are expecting a windfall of business for hotels, restaurants, gas stations and retailers — even Porta-Potty rental companies.

“It’s smart to get your supply before eclipse day to beat the inevitable shortages!” the site warns. There are $20 glow-in-the-dark “Occupy totality!” T-shirts, a $6 embroidered patch and a $3 luggage tag.

One item, called the Advice From a Solar Eclipse Magnet, reads: “See the total picture. Be moved by beauty. Live in the moment. Be naturally phenomenal. Lighten up!” It costs $4.50.

“I know people really like having swag after they’ve had an amazing experience,” White said.

Another site, Eclipse2017.org, has a page dedicated to “eclipse stuff for sale!”

Dan McGlaun, owner of Eclipse2017, said he would have made “millions” if he had chosen to sell merchandise directly instead of merely linking to other companies (his site does sell viewing glasses).

That being said, McGlaun does have something in the works. His site is teasing a mysterious, yet-to-be-announced product: “The best, most original, most unique souvenir of the 2017 total solar eclipse! Watch for it … Coming soon … ”

The eclipse market is not only limited to viewing glasses and apparel. Frey Vineyards in Redwood Valley, Calif. — which isn’t even in the path of totality — has released an Eclipse 3-Pack Special that includes a bottle of sparkling wine, a bottle of organic Zinfandel and a bottle of organic Chardonnay for $88.

The Frey family are eclipse chasers and met people working on the Great American Eclipse website who suggested they make a special wine for the event.

Jonathan Frey, general manager of Frey wines, expects to sell out of the specialty wines before the eclipse.

“It is a tradition to pop a cork after an eclipse that goes well,” Frey said.

With millions of people estimated to flood into several small cities across the path of totality, which stretches from Oregon to South Carolina, hotels are preparing for a flood of overnight guests.

Most traditional lodging facilities have been booked for months, if not years, leading people to jack up prices on Airbnb.

Nashona Haldane, a designer, defended her decision to rent her Idaho Falls home for more than $2,000 a night. She said she is looking to make some extra money to take a family vacation and pay her bills.

“I don’t see it as taking advantage, but rather as an opportunity to help my family,” she said. “Our town is small and rarely gets any opportunities like this one.”

Lanette Amundson, a disaster responder for the Red Cross in Salem, Ore., is listing her apartment on Airbnb for $7,500 a night, saying she wants to ensure she has enough money to replace any broken items or belongings.

“We have had a few inquiries and also a few messages that weren’t polite about the price,” Amundson said.

Another Airbnb host, Karli Harvey, is looking for someone to rent a camping spot in her backyard for $150 a night. She’s already rented out the guest room in her house for $500 a night.

“If you’re coming here, then it is putting a strain on the people who live here and the local economy, so you should pay more for a place to stay,” Harvey said.

Restaurants, too, are gearing up for a flood of customers.

The Black Bear Diner in Madras, Ore., expects to serve roughly 1,500 customers on the day of the eclipse, or about five times the usual number.

Owner Joe Davis has also cut the number of menu items for that day, ordered two extra-large dumpsters for garbage, rented a truck to bring his employees to work and hired six parking attendants to ensure only customers park in the restaurant’s 70 parking places.

He has also ordered portable toilets to be placed in the parking lot.

“I am expecting to have a waiting line the whole day at the restrooms,” he said.