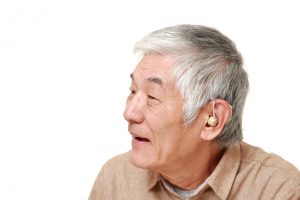 Hearing aids that cost about $1,900 apiece are only slightly more effective than some over-the-counter sound-amplification devices that sell for just a few hundred dollars, according to a recent study.

The study bolsters legislation pending in Congress that would have the Food and Drug Administration set regulations to make sound-amplification devices safer and more affordable. Consumers with mild to moderate hearing loss would be able to purchase the devices without a prescription and without a medical exam, knowing they meet federal safety standards.

For the study, researchers compared how well 42 older people with mild to moderate hearing loss repeated sentences spoken in the presence of background noise. The researchers first tested the participants’ ability to understand the speaker without any devices. Then they tested the individuals successively with a hearing aid and with five “personal sound amplification products,” or PSAPs, that are sold over the counter.

The hearing aid used in the study was a brand commonly dispensed in audiology clinics. The PSAPs either had the best electroacoustic properties or were commonly available in retail pharmacies. PSAPs perform like hearing aids but can’t be marketed as such because they don’t meet standards set by the FDA.

The results, published in July in JAMA, found very little difference in effectiveness between the hearing aid, which costs about $1,900 per ear, and some of the PSAPs, which mostly cost between $300 and $350 each.

On average, study participants were able to accurately repeat about three-quarters of the words spoken to them without using any device. Using the hearing aid boosted their understanding to an average 88.4 percent. Four of the five PSAPs were nearly as effective, with average scores ranging from 81.4 percent to 87.4 percent. The fifth PSAP performed poorly: People could hear better with their naked ears.

Age-related hearing loss is a common problem, but only about a quarter of the roughly 30 million people who have it use hearing aids, said the study’s lead author, Nicholas Reed, an audiology instructor at Johns Hopkins School of Medicine.

“That’s a lot of people who aren’t getting in through the door,” he said.

Cost may be a deciding factor for many people: Medicare doesn’t cover hearing aids, nor do most private health insurance plans.

Identical versions of the bipartisan Over-the-Counter Hearing Act of 2017 were introduced in the House and Senate this year. The text of those bills has been added as an amendment to the FDA Reauthorization Act of 2017, a bill that is key to FDA operations because it sets the government’s system for collecting fees during the drug-approval process.

Not surprisingly, hearing-aid manufacturers and distributors are against the bill. So are gun owners, who say that regulating PSAPs, which some hunters use to detect game, is, in effect, a way to regulate hunting and undermine their Second Amendment rights.

Reed said that by requiring the FDA to issue regulations on over-the-counter hearing aids, the proposed amendment would improve the products sold. Many of them are not effective, he said, and some are dangerous because there’s no control over amplification levels.

“When it gets to a certain amplification, it will just blow your hearing out,” he said. “Over-the-counter hearing measures would regulate these devices and force them to meet standards.”