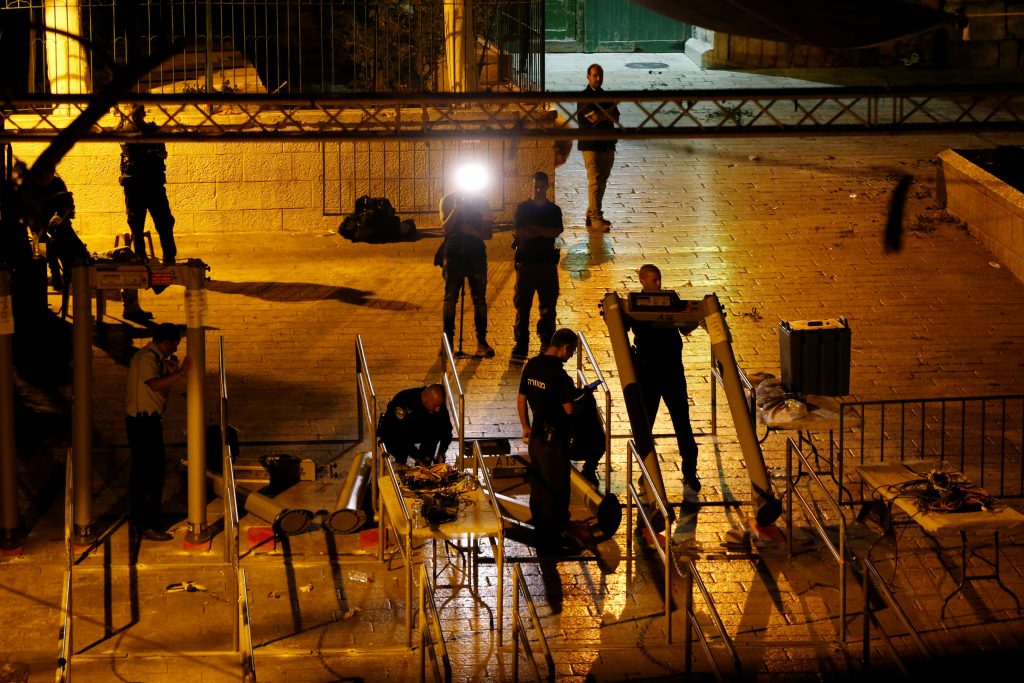 In the wake of strong criticism from the right for the Israeli capitulation to Waqf demands to remove all security measures from the entrances to Har HaBayis, sources close to Prime Minister Binyamin Netanyahu on Thursday sought to deflect responsibility for the decision to the Shin Bet, the NRG news site said.

According to the sources, the intelligence agency “presented apocalyptic scenarios that indicated that there would be a major explosion of anger if we did not withdraw the security measures,” the site quoted the sources as saying.

The decision to remove the body scanners, metal detectors and high-resolution cameras from the entrances to Har HaBayis was made by the Security Cabinet Monday night. The decision to remove the scanners and detectors came after heavy pressure from the White House and King Abdullah of Jordan — and after Sunday night’s diplomatic incident, in which an Israeli security guard was essentially held hostage in Jordan after he shot and killed a terrorist who tried to stab him. The security guard was released, as Israel began removing the security equipment.

But a charged debate broke out on whether to leave the high-resolution cameras that had been placed as an alternative to the security equipment three days earlier. Police speaking before the Cabinet told ministers that there would be no new security problems if the cameras were kept in place, Haaretz quoted sources at the meeting as saying. The cameras were not as invasive as the scanners, and even if the Waqf opposed them, the cameras would not lead to mass protests, police said.

But Shin Bet officials said that all equipment, including cameras, should be removed, and that the status quo should be restored to what it was before the murder of the Israeli police officers — otherwise, there would be a major outbreak of violence by Arabs.

Ministers Naftali Bennett, Ze’ev Elkin and Ayelet Shaked argued on behalf of the position held by police, while Prime Minister Netanyahu and Defense Minister Avigdor Liberman — along with Public Security Minister Gilad Erdan — pushed for removal of all the equipment, in line with the Shin Bet recommendations.

On Thursday, sources said the prime minister now feels he may have been “misled,” the NRG news site said.

At a news conference Thursday afternoon, Israel Police chief Roni Alshich said that despite their misgivings, police were subject to the decisions of the government on security matters. Police, he said, were ultimately responsible for security at Har HaBayis, and would do their job in line with government policy.

One problem that needed to be dealt with, he added, was “competition between different Islamist groups to show off which one is more radical.”