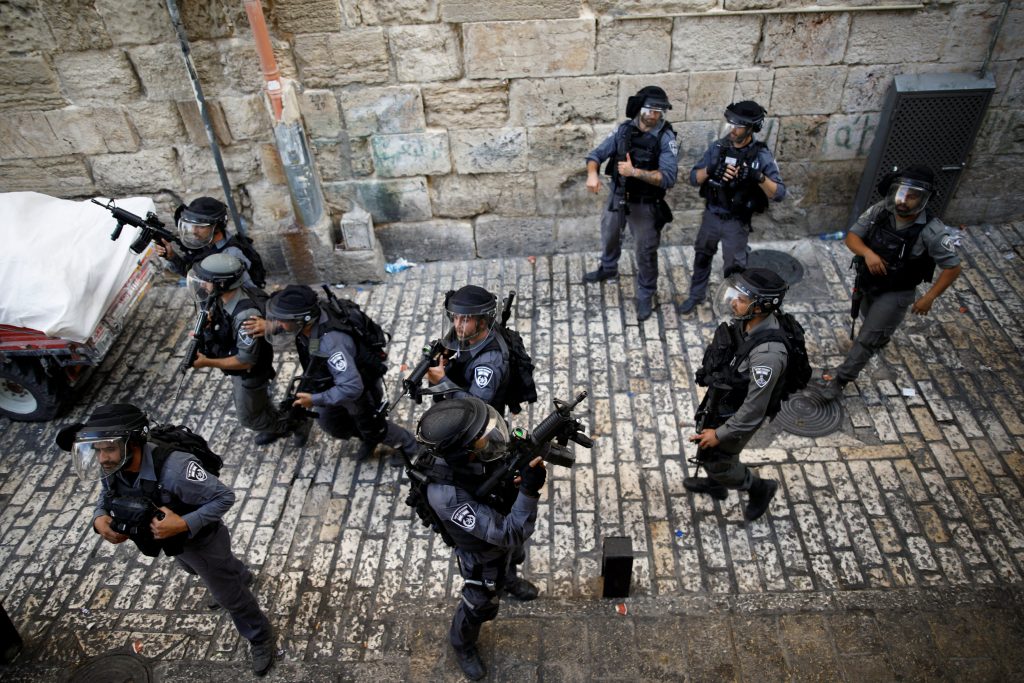 The Palestinian leadership has called for a “day of rage” on Friday to protest Israeli control of Yerushalayim, and are planning multiple clashes with IDF forces.

In Yerushalayim, the official assessment is that Mahmoud Abbas is behind the escalation of violence among the Palestinians, with an eye to exploiting the turmoil surrounding Har HaBayis by demonstrating that he is as capable of fighting the Israelis as Hamas.

Further, according to the evidence in the hands of the Israelis, the Americans and the U.N. Abbas is the instigator of the current unrest. “We are with you in everything you have done and will do, you are the pride of the Palestinian people,” Abbas was quoted as saying to Fatah, the Tanzim all the other terrorists and armed groups over whom he has influence.

In response, Israeli security forces have been put on the highest alert, to defend against possible terror attacks, mass demonstrations and violent disorders around Har HaBayis, roads leading to mosques, parts of Yehudah and Shomron, near the Gaza border and elsewhere.

After consultations with senior security officials, Prime Minister Binyamin Netanyahu ordered a reinforcement of the police in the capital that is to include additional border police, as well as thousands of IDF soldiers, who will be arriving overnight.

A major concern involves the roughly 2,000 Muslim youths who entered Har HaBayis in the afternoon and remained there into the night. Security forces are expecting that they will emerge from hiding on Friday to continue violent confrontations.

At the same time, police were checking a report that several Arab Knesset members also entered the site, in violation of a ban imposed by the prime minister on all MKs.

Police have notified the public that only Palestinian men aged 50 and above will be allowed to enter Har HaBayis. As well, a number of individuals known to the authorities for their history of incitement will not be admitted.

On Thursday evening, dozens of Israeli vehicles were assaulted with rocks in various parts of the country, but b’chasdei Shamayim no injuries were reported.

Palestinian media were showing on Thursday a special message with a picture of the Al-Aksa Mosque and thousands celebrating the “Victory over Israel.”

Palestinian Authority President Mahmoud Abbas, who is also head of Fatah, called on his people Thursday for a major escalation of attacks against IDF soldiers and security forces, Jewish communities and vehicles across Yehudah and Shomron.

The call to violence comes even after the Muslim authority at Har HaBayis, the Wakf, lifted the ban on entry to the compound following removal of recently installed Israeli security measures. Even after thousands of worshippers entered the gates on Thursday, many refused to do so and continue to protest Israeli control of the site. It is worth noting that even in the Muslim city of Mecca, metal detectors have been installed in order to prevent terror attacks.

One outstanding example of the line being taken by Palestinian leaders was Hatem Abdel Kader, who holds the Yerushalayim portfolio of Fatah, who said: “We are ready to escalate. The Israelis are going to escalate, and we have no problem on the Palestinian side to escalate. Escalation is answered with escalation; violence with violence. The one who starts is to blame, and Israel must take responsibility [for what happens].”

According to media reports, Abbas Zakhi, a member of the Fatah central committee, called for “popular resistance,” usually a codeword for acts of violence and terror against the Jewish population. He said further that “I call on the Palestinians to show the world that the Israeli occupation is the worst terror of all, and that the Palestinians have a right to terror.”

He was also quoted as saying that “we are paying the price for the illusory peace of the Oslo Accords,” and demanded an end to the “Israeli occupation.”