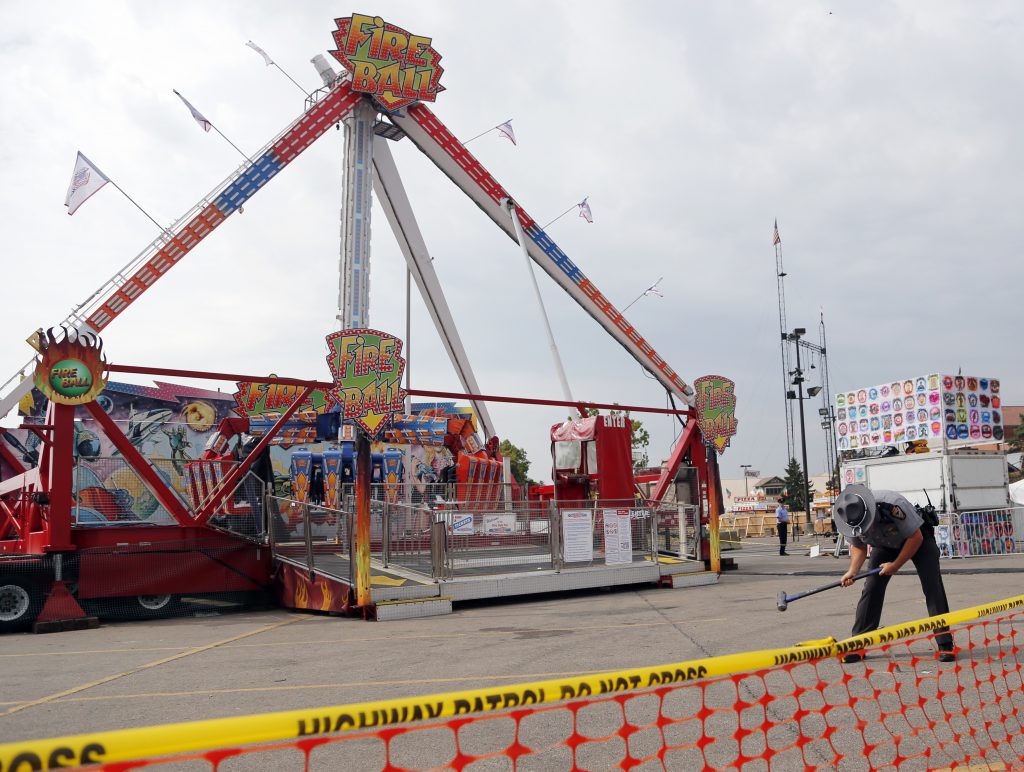 The Ohio State Fair was open Thursday, but its amusement rides remain closed a day after a man was killed and seven other people were injured when a thrill ride broke apart and flung people into the air.

Video captured by a bystander at the fair Wednesday evening shows the Fire Ball ride swinging above its bottom platform when a crashing sound is heard. The footage shows one section holding four riders come apart as it begins to swing upward and at least two people tumbling in the air.

Screams are heard as passengers are thrown to the ground.

“Our hearts are heavy for the families of those involved in last night’s tragic accident,” fair officials said in a Thursday post on Twitter. “We have shut down all rides until the state has inspected each and every ride again and deemed them to be safe.”

Tyler Jarrell, 18, of Columbus, died on the midway, and was one of several people who were thrown to the ground when the ride malfunctioned. The others injured range in age from 14 to 42. At least two of the injured were in critical condition Thursday at Ohio State Medical Center.

Officials are investigating what caused the ride to break apart and would not speculate on possible explanations.

Records show that inspections were up to date and a state permit had just been issued for the ride. Ohio Department of Agriculture records provided Thursday to The Associated Press show passing marks on inspections of about three dozen items including cracks, brakes, proper assembly and installation.

The Fire Ball ride swings 24 riders back and forth like a pendulum while they sit facing each other in four-seat carriages that also spin and are attached to the main arm.

Amusements of America, the company that provides rides to the Ohio State Fair, describes the Fire Ball as an “aggressive thrill ride.” On its website, it says the Fire Ball debuted in 2002 and is one of its most popular rides on the midway. It says it can swing passengers 40 feet above the ground, while spinning them at 13 revolutions per minute.

Amusements of America did not immediately return a phone message seeking comment.

The ride’s Dutch manufacturer, KMG, said the one at the Ohio State Fair was built in 1998 in the Netherlands. Forty-three of the rides, also known as the Afterburner, are in use in the U.S. and elsewhere. None has been involved in a serious malfunction before, the company said in an email to The Associated Press.

Gov. John Kasich said after the accident, “Of course we want to get to the bottom of this. Make no mistake about it; it’s a very, very sad night for all of us,” noting that findings could help other fairs and amusement parks.

The accident prompted fairs in California and Canada to shut down the Fire Ball ride.

Barry Schaible, an inspector with a company hired by the California State Fair, told KCRA-TV in Sacramento, “We shut down the ride immediately, unloaded it and it’s closed right now.”

“We take this job very serious, and when we have an accident like this … it hits us really hard,” Vartorella said. “My children, my grandchildren, ride this equipment. Our guys do not rush through this stuff. We look at it, we take care of it, and we pretend it’s our own.”

For Kaylie Bellomy, the state fair’s opening day hit her personally. Bellomy was in the next group waiting to board the Fire Ball.

“It was going for a minute and it was at its highest point and I saw somebody fall on the ride, and then a minute later the whole like row of seats fell off and hit the ground,” Bellomy told WCMH-TV.

It was chaos afterward, she said. “Everybody was running. I got ran over trying to get out of the way.”

The Ohio State Fair, which is one of the largest state fairs in the U.S., runs through Aug. 6.