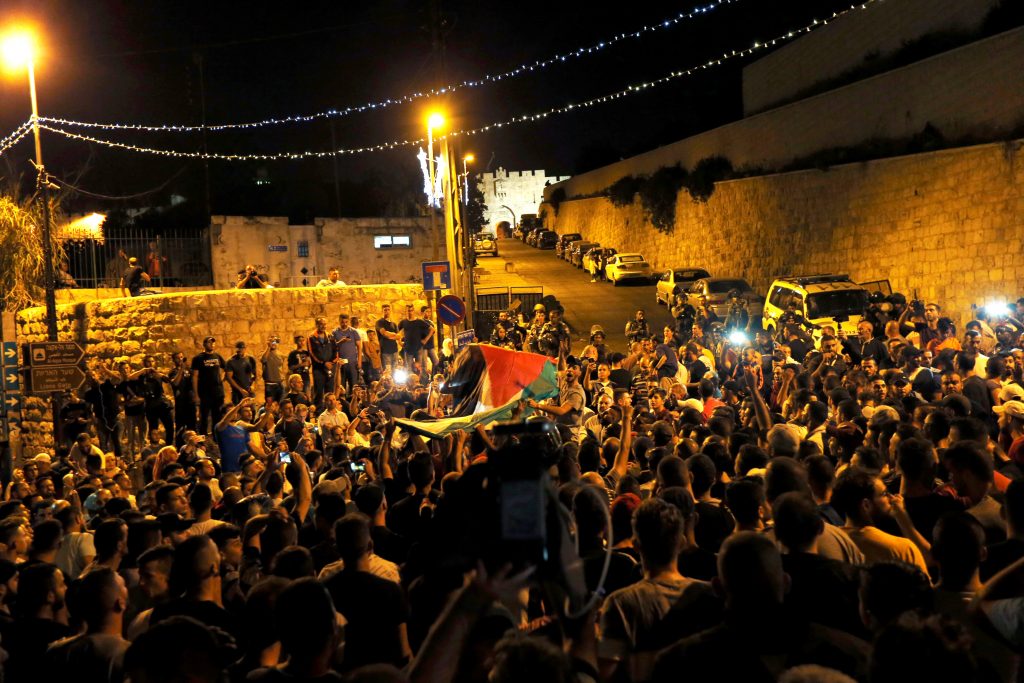 Despite removing infrastructure for the installation of smart cameras and sensors in the area of Har HaBayis – as demanded by the Waqf – Israel is still preparing for major riots on Friday, as Hamas and Fatah celebrated overnight Wednesday their “victory” over Israel. Police said Thursday that the security situation at Har HaBayis had reverted to that of two weeks ago, before the murders of Israeli police officers Ha’il Satawi and Kamil Shanan in the Har HaBayis terror attack – and as such they could not guarantee that Arab terrorists would not take the opportunity to smuggle arms into the compound, as they did before the terror attack. Security checks will take place on an individual basis for those police believe appear suspicious – and the checks will be done manually on those individuals alone.

Hamas has called for another “day of rage” over the security measures installed at Har HaBayis – even though those measures were largely removed earlier this week. Instead of the body scanners, metal detectors and high-resolution cameras that had been installed after the terror attack, police decided to install a smart camera and sensor system – not at the entrances to Har HaBayis, but further back, and in an unobtrusive manner. Installation was set to take place in about six months, as the system was not ready – but infrastructure, including metal posts to hold the devices, were set up. Still, Arabs, including the Palestinian Authority and the Waqf, demanded that that system not be installed – and overnight Wednesday, police removed the infrastructure, without making an announcement.

Word spread quickly, however, and thousands of Arabs converged on Har HaBayis, celebrating their “victory.” Hamas said in a statement that it was “a historic victory over Israel, over its army and its government.” Fatah said that “the great victory in Al-Aqsa was due to the Palestinian heroes in Jerusalem and the political leadership headed by Mahmous Abbas.”

Waqf heads were set to discuss the new situation with Abbas Thursday, and decide whether to end their boycott of Har HaBayis. Thursday morning prayers were held outside the compound.

The Waqf had declared its approval after Israel removed the metal detectors earlier in the week, but that did not reassure the public or political leaders.

It remains unclear, therefore, whether the Waqf’s backing this time – if granted – will be sufficient to defray the tensions and restore calm.

Meanwhile, police are concerned that despite the government’s assenting to all of the Waqf’s demands, Arabs will still riot on Friday, this time out of “happiness” over their “victory.” Thousands of police and IDF soldiers will be on duty in Yerushalayim and across Yehudah and Shomron.

Police sources bitterly told Channel Two that many officers felt that the efforts they put in over the past two weeks have been in vain. “Dozens of police were injured in these riots, and now we are capitulating to their demands,” said one officer. “There’s no question that the ‘fear effect’ that police need to do their job has been harmed.” If there was one positive result of the episode, the sources said, it is that in recent days the IDF has arrested a larger number of terrorists than it did previously, and it was likely that some of those terrorists might have undertaken an attack given the higher level of tension over the past two weeks.