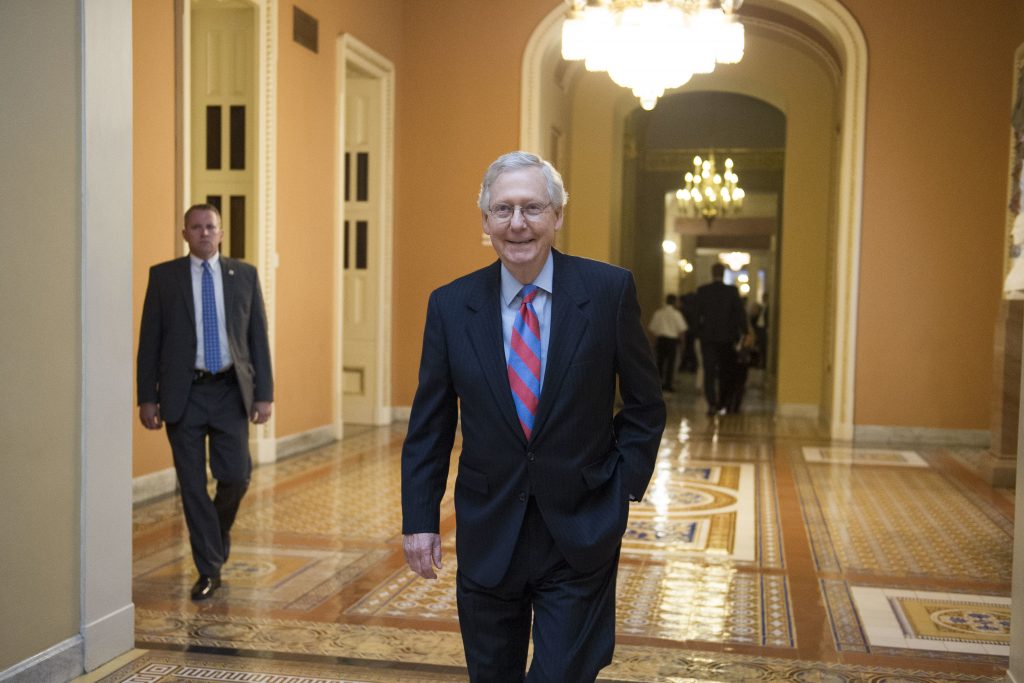 Battered by repeated failures to repeal or replace Obamacare, Senate GOP leaders retreated to a narrow approach Thursday that would undo just a few of the most unpopular elements of Barack Obama’s law. Democrats vowed opposition as the Senate prepared for a bizarre Capitol Hill ritual, a “vote-a-rama” on amendments that promised to last into the wee hours of Friday morning.

The so-called “skinny repeal” was being touted as a way for Republicans to get something, anything, out of the Senate after frittering away the first six months of Donald Trump’s presidency trying unsuccessfully to get rid of the current law. Talks with the House would follow, with the hope of crafting a compromise repeal-and-replace bill that could pass both chambers sometime in the fall.

Whether Republicans can make it that far looks iffy at best. But Trump tweeted his encouragement Thursday morning, albeit with an ominous touch, “Come on Republican Senators, you can do it on Healthcare. After 7 years, this is your chance to shine! Don’t let the American people down!”

The “skinny bill” strategy emerged after Republicans barely succeeded earlier this week in opening debate on health legislation in the narrowly divided Senate, winning the procedural vote to do so thanks only to Vice President Mike Pence breaking a 50-50 tie.

Hours of debate followed, as well as few amendment votes that starkly revealed Republican divides. On Tuesday, on a 57-43 vote with nine GOP defections, the Senate rejected a wide-ranging proposal by Majority Leader Mitch McConnell to erase and replace much of the Affordable Care Act. Then on Wednesday, a straightforward repeal measure failed 55-45 with seven Republicans joining Democrats in voting “no,” even though nearly identical legislation had passed Congress two years earlier.

That left Republican senators hunting for other options, and the “skinny repeal” rose to the top. The measure has not been finalized, but senators have said it could eliminate Obamacare’s two mandates — for individuals to carry insurance and for employers to offer it.

Lobbyists said Republicans were also planning to include extra money for community health centers and waivers for states to permit insurers to sell policies with far narrower coverage than current law allows.

But leaders were encountering problems. The Senate parliamentarian advised that the waiver language violates chamber rules, meaning Democrats could block it. And plans to eliminate Obama’s medical device tax could be abandoned because Republicans need to find additional savings for their package.

Whether Republicans have the votes even to pass that much is unclear. But the outcome will emerge over the next 12 to 24 hours, as senators buckle in for the “vote-a-rama,” during which unlimited amendment votes can be offered on the health legislation from both sides.

Most of them will be dismissed along partisan lines; some may resurface in years to come in the form of attack ads. But at some point along the way, McConnell is expected to offer the “skinny bill” as an amendment of his own, with hopes it will get a majority.

“I think it is quite likely we will be here much of the night, if not all night,” said Sen. Ted Cruz, R-Texas. “And at the end of it, hopefully we’ll have a bill that can bring us together.”

Yet as has happened every step of the way in the health-care debate, no sooner did the “skinny bill” emerge than opposition arrayed against it.

A bipartisan group of governors including John Kasich of Ohio and Brian Sandoval of Nevada also announced against it.

Although Republican senators presented the “skinny bill” as a means to get into talks with the House, some GOP aides and lobbyists were suggesting that the House might pass the Senate’s “skinny bill” as-is, which would allow Republicans to claim at least a partial victory and move on to other issues. With tax legislation and other priorities waiting in the wings, Republicans are eager to rid themselves of the burden of making good on their many campaign promises to repeal and replace Obamacare, which has proven far more difficult than expected.

But the House might be unwilling to agree to the “skinny bill” as-is. Conservatives were already ruling that out.

“There would not be enough votes to pass it and send it to the president,” said Rep. Mark Meadows of North Carolina, head of the conservative Freedom Caucus. “But to use it as a vehicle to continue negotiations is certainly welcomed.”

Ricardo Alonso-Zaldivar contributed to this report.