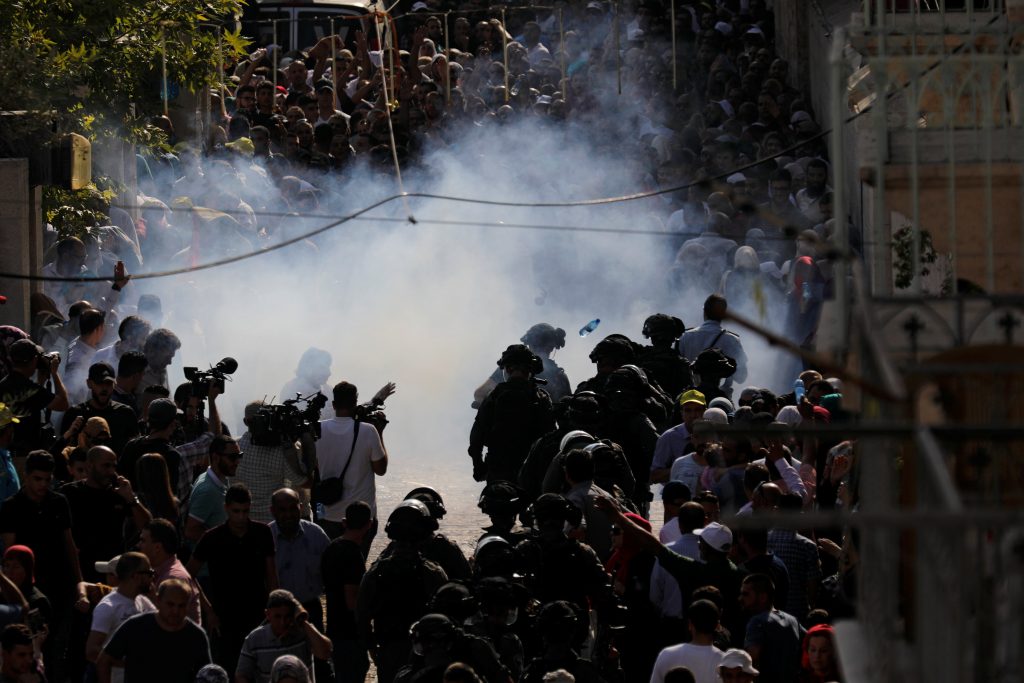 Thousands of Muslim worshippers rushed to pray at Al-Aqsa Mosque on Har HaBayis in chaotic scenes on Thursday after the Waqf, the Muslim authority at the site, lifted a ban following the removal of Israeli security measures.

At least 37 — 46 according to one report — Palestinians were injured as Israeli security forces used tear gas, rubber bullets and stun grenades to control crowds surging forth once the last gate Muslims are allowed to use to enter Al-Aqsa was opened after a stand-off of several hours.

The return of worshippers was delayed by a last-minute confrontation at the Huta Gate where two Israeli policemen were murdered on July 14 by three Arab Israeli gunmen. That gate was the last to be opened on Thursday.

Witnesses told The Times of Israel that police had opened and closed it a few times before dispersing the crowd with stun grenades. It was then closed and police barricaded off the area.

One protester told a police officer at the scene that “the story is over; you can go home now,” and worshipers cried and shouted “Allahu Akbar” as they entered the compound.

For the past two weeks, most Muslims have refused to enter, instead praying in the streets around the Old City.

Earlier on Thursday, Muslim elders declared themselves satisfied that Israeli authorities had removed all the new security measures — mainly metal detectors and CCTV cameras — and reverted to the set-up before July 14.

“The technical report showed that all obstacles the occupation (Israel) put outside Al-Aqsa mosque were removed,” said Abdel-Azeem Salhab, the head of the Waqf, the Jordanian-funded trust that oversees Jerusalem’s Muslim holy sites.

Palestinian political factions issued statements supporting the Waqf, which looked likely to help defuse the unrest. Before the announcement, factions had been calling for a “day of rage” on Friday, raising concerns about another round of violence.

Saudi Arabia said King Salman had been in contact with the United States and other powers to try to dampen the tensions and had “stressed the need for the return of calm.” He called for respect for the sanctity of the compound.