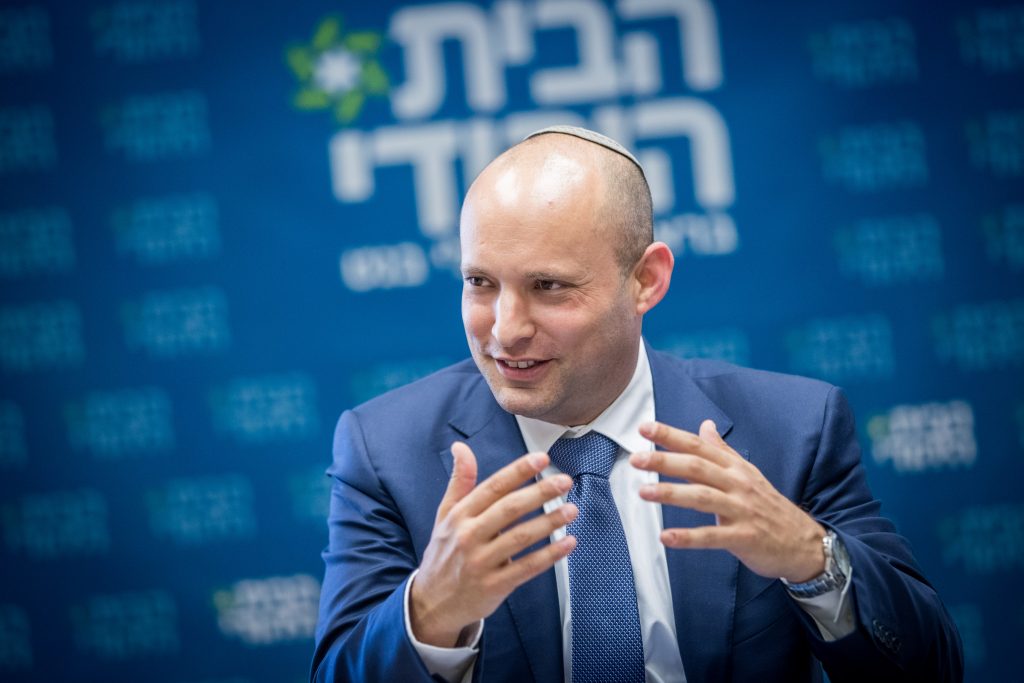 With the final removal of security measures from the entrance to Har HaBayis, the support of some of the right-wing elements in Prime Minister Binyamin Netanyahu’s coalition appears to have become severely compromised. In an interview on Army Radio, Jewish Home chairman and Education Minister Naftali Bennet said that the removal of the equipment has made Israel “appear weaker. Instead of strengthening our sovereignty in Yerushalayim, this episode has weakened it.” The decision to remove the equipment will just incite more violence, and in fact “is as bad as when Israel ran away from Lebanon” in 2000.

The last vestige of a promise of advanced security at Har HaBayis – metal holders that were to hold a smart camera and sensor system that had not yet been installed – were removed overnight Wednesday, after other security measures installed two weeks ago after the terror attack on Har HaBayis were removed earlier this week. Instead of the body scanners, metal detectors and high-resolution cameras that had been installed after the terror attack, police decided to install a smart camera and sensor system – not at the entrances to Har HaBayis, but further back, and in an unobtrusive manner. Installation was set to take place in about six months, as the system was not ready – but infrastructure, including metal posts to hold the devices, were set up.

Still, Arabs, including the Palestinian Authority and the Waqf, demanded that that system not be installed – and overnight Wednesday, police removed the infrastructure, without making an announcement. Police said Thursday that the security situation at Har HaBayis had reverted to that two weeks ago, before the murders of Israeli police officers Ha’il Satawi and Kamil Shanan in the Har HaBayis terror attack – and as such they could not guarantee that Arab terrorists would not take the opportunity to smuggle arms into the compound, as they did before the terror attack. Security checks will take place on an individual basis for those police believe appear suspicious – and the checks will be done manually on those individuals alone.

Removing the security apparatus was a huge mistake, Bennett said. “In the Cabinet discussion I led the arguments against removing the security equipment, but when I saw that position was being rejected by Netanyahu and his supporters I pulled back and gave my support to the government decision. I will continue to do so.” But that doesn’t mean he has changed his opinion. “It could be that you get some temporary quiet by capitulating, but each time we capitulate we get another intifada. You gain in the short run but lose a lot more in the long run, as the fear of rebelling is lost.”

The government made the same mistake by allowing Arabs in Umm el-Faham to hold a mass funeral for the three terrorists who carried out the terror attack on Har HaBayis two weeks ago. “In the past they have tried to organize anti-Israel protests in Umm el-Faham, and maybe 60 people showed up. Now they sensed we are weak, and thousands came to the funeral to praise the terrorists’ ‘martrydom.’ We need to be prepared for an uptick in violence,and develop a plan to halt further terror attacks.”

With the damage done, Israel needed to correct the situation as much as possible. “I demand that the prime minister and the defense minister take all the ‘gestures’ and ‘concessions’ we have made to the Palestinians off the table,” including the plan to construct thousands of housing units in Kalkilya. “Instead, we need plans to prevent further terror attacks,” he added.

Responding to Bennett’s comments, a Likud source said that “the actions and behavior of Bennett in this crisis were childish and irresponsible. He is not looking out for the good of the country, but for his own advancement.”