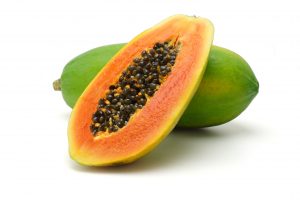 U.S. health officials say consumers should avoid a variety of papaya from Mexico linked to a salmonella outbreak that has been blamed for the death of a person in New York City and for sickening 46 others in 12 states.

The Food and Drug Administration said in a news release Tuesday that it and the U.S. Centers for Disease Control and Prevention are working with state health officials to track cases of the foodborne illness linked to Caribeña brand Maradol papayas, which have a yellow skin when ripe and a salmon-colored flesh.

Genetic testing has linked salmonella found in papaya samples from a Maryland grocery store with samples taken from sickened people, the CDC said.

The Maryland Department of Health said three of five papayas bought at a Baltimore grocery store were contaminated with salmonella. Interviews revealed that several ill people in Maryland shopped at the store and bought papayas, which helped officials identify a source.

New York has had 13 reported cases and New Jersey has had 12. Virginia has had six, Maryland has had five, and Pennsylvania has had four. Iowa, Kentucky, Louisiana, Massachusetts, Minnesota, Texas and Utah have had one each.

Salmonella bacteria can cause diarrhea, vomiting, stomach pain and fever. Young children, older adults and people with weakened immune systems are the most likely to have severe infections.

The FDA said San Juan, Texas-based Grande Produce has initiated a limited recall of its Caribeña brand Maradol papayas that were distributed nationwide between July 7 and July 18, but that the company has not issued a news release informing its customers.

“Therefore, FDA is advising consumers to avoid all Caribeña brand Maradol papayas. The FDA also noted that there are illnesses in states where Grande Produce did not distribute papayas and is continuing its investigation,” the agency said.

A company spokesman did not immediately reply to a message left Wednesday seeking comment.

Anyone unsure about whether the papaya they bought is a Maradol from Mexico should not “eat, sell, or serve them and throw them out,” the FDA said.