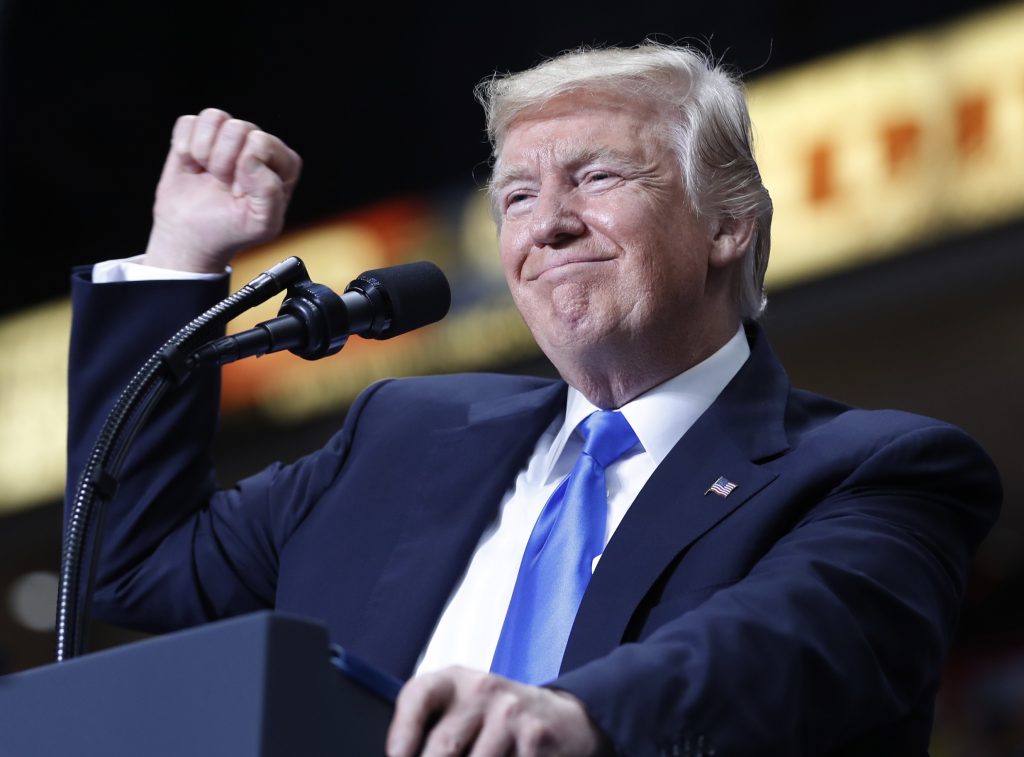 Celebrating a slim but symbolic health-care win in Washington, President Donald Trump told supporters in Ohio on Tuesday night that the nation was one step closer to liberation from the “Obamacare nightmare.”

“You think that’s easy? That’s not easy,” he told a crowd of thousands just hours after the Senate took a small but hard-fought first step toward Republicans’ years-long promise to repeal and replace former President Barack Obama’s health-care law.

Clearly energized to be back in front of a friendly crowd of supporters, Trump said repeatedly that he believes in speaking directly to the American people and not through the “fake news” media. And he joked about accusations that he doesn’t act presidential.

“It’s so easy to act presidential,” he said. “But that’s not going to get it done.”

President Trump said that with the Senate’s vote to allow consideration of a health-care bill, “We’re now one step closer to liberating our citizens from this Obamacare nightmare and delivering great health care for the American people.”

Trumpeting his administration’s tough approach to illegal immigration and criminal gangs, Trump described people “screaming from their windows, ‘Thank you, thank you,'” to border patrol agents and his Homeland Security secretary.

“We’re liberating our towns and we’re liberating our cities. Can you believe we have to do that?” he asked, adding that law enforcement agents were rooting out gang members — and “not doing it in a politically correct fashion. We’re doing it rough.”

“Our guys are rougher than their guys,” he bragged.

Trump also said Tuesday that he’s been working with a pair of Republican senators to “create a new immigration system for America.”

“We want a merit-based system, one that protects our workers” and one that “protects our economy,” said Trump, endorsing legislation introduced by Sens. Tom Cotton and David Perdue that would put new limits on legal immigration.

Ahead of the rally, Trump stopped by a veterans’ event as part of the White House’s weeklong celebration of servicemen and women. Following brief remarks by several of his Cabinet members, Trump entered a small room of veterans, several of them over 80 years old, and praised them for their commitment and sacrifice for the country.

“A truly grateful nation salutes you,” Trump told the group in Sutherland, Ohio.

But he quickly shifted gears to recall his unexpected election win in Ohio, praising Youngstown and towns like it for helping him secure the electoral votes that put him over the top.

“It was [an] incredible time we had. You saw the numbers,” he said. “Democrats, they win in Youngstown — but not this time.”

Trump has mainly sought to relitigate his 2016 victory in friendly territory, escaping Washington to recharge with boisterous crowds that embrace his jabs at “fake news” media, Democrats and even those Republicans whom Trump once vowed to defeat as part of his effort to “drain the swamp.”

Democrat Hillary Clinton herself did not frequent this stretch of the industrial Midwest in her campaign against Trump, instead dispatching her husband, the former president, on little-noticed bus tours of the region. Trump ended up narrowing Clinton’s advantage to 3 points on his way to an 8-point victory statewide.

The surrounding 13th Congressional District, which Trump lost by 6.5 percentage points, is among the Democratic-held seats that Republicans are targeting next year, and the local congressman, Rep. Tim Ryan, happens to be one of the Democrats’ most intense internal critics.

Ryan won two-thirds of the vote to win an easy re-election in November despite Trump’s performance, a result that demonstrates the president’s appeal among white voters who have historically backed Democrats. Shortly after, he ran unsuccessfully against Nancy Pelosi, D-Calif., for House minority leader, and he continues to criticize the party for leaning too heavily on leaders from coastal states and failing to communicate a coherent economic message to much of the rest of the country.