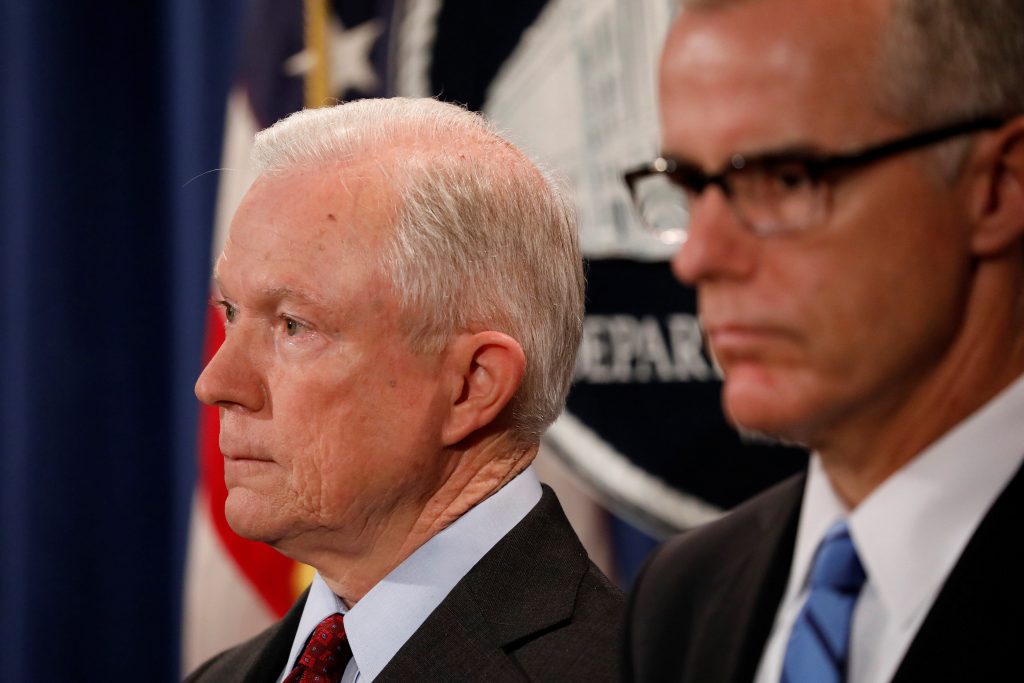 President Donald Trump renewed his attacks on Attorney General Jeff Sessions Wednesday, questioning on Twitter why the top U.S. law enforcement official had not replaced the acting FBI director – a move that Pres.Trump himself has the authority to do.

In two tweets just before 10 a.m., Trump wrote, “Why didn’t A.G. Sessions replace Acting FBI Director Andrew McCabe, a Comey friend who was in charge of Clinton investigation but got big dollars ($700,000) for his wife’s political run from Hillary Clinton and her representatives. Drain the Swamp!”

Trump has for days been attacking his attorney general, and he has similarly been critical of McCabe, who took over as the acting director of the FBI after Trump fired James B. Comey. But his latest attack is curious.

Sessions was not the attorney general during the FBI’s investigation into Hillary Clinton’s use of a private email server. And the president himself could remove McCabe without Sessions. Administration officials actually contemplated doing so after Comey’s firing. Sessions and Deputy Attorney General Rod J. Rosenstein met with four other candidates to lead the FBI on an interim basis, though the administration ultimately stuck with McCabe.

In recent days, Trump has talked with advisers about replacing Sessions as his attorney general, and he has simultaneously criticized him in public. At a news conference Tuesday, he said he was “disappointed” in Sessions and declined to say exactly what his future was.

“We will see what happens,” Trump said. “Time will well. Time will tell.”

Congressional Republicans have come to the defense of Sessions, publicly urging Trump to back off his criticism of the attorney general.

McConnell declined to say if he directly raised the issue with Trump, but made clear that he has voiced that support for Sessions to high-level officials.

“I’ve conveyed that to the public and to others,” McConnell said.

A person familiar with internal White House discussions about Sessions said Trump’s attacks on Sessions are a public airing of what the president has been saying for months privately – that he blames Sessions’s recusal for the appointment of a special counsel to investigate possible ties to Russia. But the person cautioned that neither the president nor his advisers have articulated a plan for replacing Sessions with someone else, and the angry words are primarily a venting of the president’s anger, rather than a calculated effort to drive the attorney general out of office.

Sessions has shown no indication of stepping aside voluntarily.

In a recent conversation, Sessions’s chief of staff, Jody Hunt, told White House Chief of Staff Reince Priebus that the attorney general had no intention of stepping down. Hunt, according to people familiar with the conversation, made it clear to Priebus that Sessions “plans to move forward with his agenda in the department, and he has no plans for resigning.” Priebus, for his part, did not say Trump planned to fire Sessions if he did not leave, these people said.

Trump has also shown some ire for McCabe, who seemed to put himself at odds with the Trump in May when, during an appearance before Congress, he rejected the White House’s characterization of the Russian meddling probe as a low priority and delivered a passionate defense of Comey.

Trump’s latest line of attack refers to an issue that emerged late in the 2016 presidential campaign, when it was revealed that the political action committee of Virginia Gov. Terry McAuliffe, a longtime ally of Hillary Clinton, gave nearly $500,000 to the 2015 state senate campaign of McCabe’s wife, Jill McCabe. The Virginia Democratic Party, over which McAuliffe exerts considerable control, donated an additional $207,788 worth of support to McCabe’s campaign in the form of mailers, according to state campaign records.

Andrew McCabe was a senior FBI official at the time of that 2015 election, which Jill McCabe lost. After that election, Andrew McCabe was promoted to the No. 2 position at FBI headquarters under then-FBI director Comey. As deputy director, McCabe was part of the senior leadership team overseeing the Clinton email investigation, and a stalled probe involving the Clinton Foundation. Within the FBI, some agents were concerned about McCabe’s involvement in those cases, given the previous campaign donations, but FBI ethics officials told McCabe it was not a conflict of interest to be involved with those cases. The issue is now being investigated by the Justice Department’s inspector general.

When the president fired Comey in May, McCabe became acting director of the FBI, and even had a White House interview to take the job on a permanent basis. Since Comey’s firing, many inside the agency and the larger federal law enforcement workforce have rallied to support McCabe, who is generally regarded internally as trying to maintain and defend the agency’s independence in the face of criticism from Trump.

Trump himself has the power to replace McCabe as the interim FBI director. When officials were considering doing so months ago, they were relying on the Vacancies Reform Act, which says only the president can do so. Officials said at the time that if McCabe were to have been replaced, he would have returned to his role in the No. 2 spot.