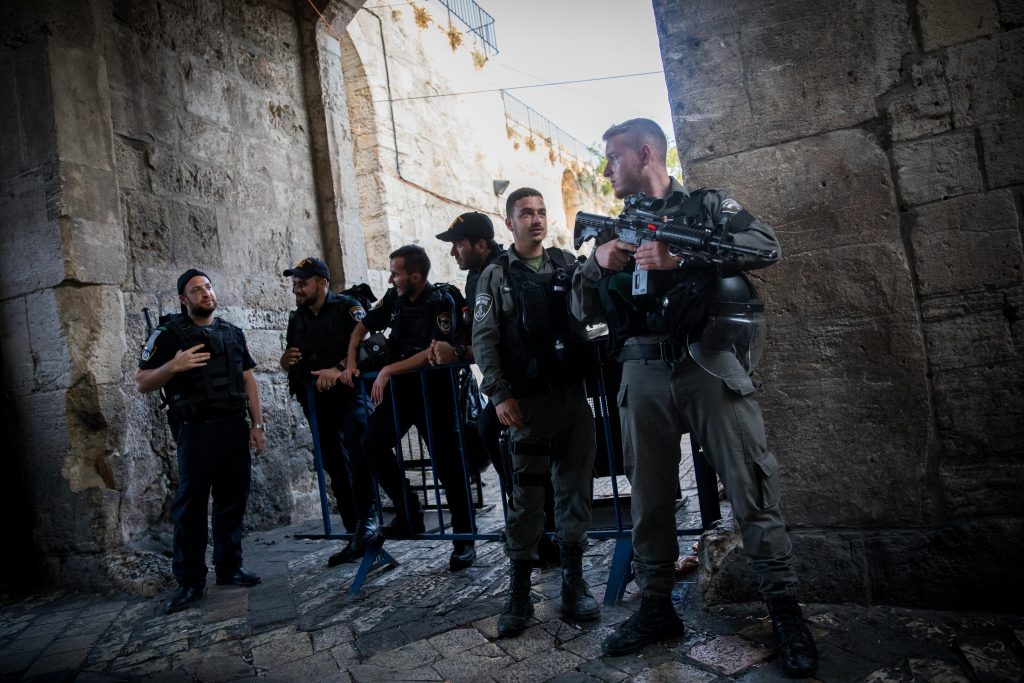 Tensions were ratcheted higher in Yerushalayim on Wednesday as Palestinian Authority President Mahmoud Abbas approved mobilization of the Fatah Tanzim militia for a confrontation with Israeli police on Friday, according to media reports.

The decision was announced just hours after a Hamas demonstration in Gaza where they called for Palestinians to challenge the Israeli security forces at Har HaBayis on Friday and beyond.

However, PA officials were quoted by Haaretz as saying there is no plan for masked gunmen or armed struggle.

Senior Fatah officials, including the deputy of PA President Mahmoud Abbas and the head of the Tanzim, reportedly met in Ramallah on Wednesday evening. The Tanzim were at the head of violent demonstrations in the Second Intifada in 2000.

A Fatah spokesman said that “the ball is in Israel’s court.”

Fatah’s Shabiba youth movement also released a statement in support of mass demonstrations on Friday, and vowed “the expansion of the circle of …and the opening of all fronts, in villages, cities and refugee camps.”

Meanwhile, King Abdullah of Jordan spoke on the phone with Abbas about the crisis on Wednesday, asking him to help calm spiraling tensions, according to The Times of Israel.

They pledged continued coordination of efforts to ensure the return of the situation on Har HaBayis to its previous status, prior to the terror attack on July 14 and the subsequent security measures instituted by Israel.

Speaking to Sky News Arabic, Jordanian Foreign Minister Ayman Safadi said there had been some progress in resolving the crisis, “but the issue remains unresolved.”

“The popular stance on the ground says that there is no solution but to remove all the measures and obstacles that have been put in place,” he said. “Jordan wants calm, but knows that in order for calm to prevail, the solution must be accepted by the people.”

The measures—metal detectors—have been removed, but the protests will go on, they say, until all security measures, including metal railings, are removed.

The Israeli government said that the metal detectors and cameras will be replaced by a different surveillance system, at a cost of about 100 million shekels ($28 million), but that it won’t be ready for six months.

In the meantime, Israeli security forces at the entrance to Har HaBayis are using metal-detecting wands to check visitors. And on Wednesday morning, the Prime Minister’s Office said that PM Netanyahu has directed that individual, manual checks be carried out for anyone entering the site.

However, a police official told The Times of Israel that they are not inspecting every person, only those deemed suspicious. The contentious gate-style detectors were also only used at the discretion of officers on the scene, not on everyone.