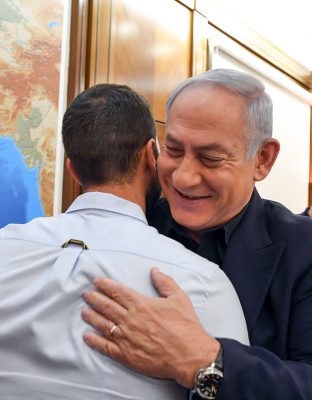 The Israeli security guard who was attacked by a terrorist and shot two people in defense in Jordan is to be questioned by Israeli police. Police said in a statement that the questioning is required under international law, as the security guard was sent back home Monday after Israel claimed that he was covered by diplomatic immunity.

The guard, known as Ziv, shot a 17-year-old terrorist Sunday night who attacked him while doing work in an apartment rented by the Israeli embassy in Amman. Wounded in the incident – and eventually dying of his wounds – was the owner of the apartment. The guard immediately went to the embassy, with Jordanian officials demanding that he be surrendered. Israel refused, citing diplomatic immunity. After hours of negotiations, Jordan issued authorization for the security guard to leave. Under international laws and covering diplomatic immunity, Israel is required to question Ziv. The transcript and findings of the interrogation will be forwarded to Jordan. He could be prosecuted in Israel if police find cause to do so, police said.

Prime Minister Binyamin Netanyahu met with Ziv and other staff who returned from Jordan on Tuesday. Netanyahu said that he was “happy to see you, and happy that things worked out. You acted appropriately – logically and with determination. We had an obligation to bring you home, and we did.”

Speaking to Jordanian media, Jordanian Foreign Minister Ayman Safadi said that Israel had blown the story far out of proportion. “Israel tried to portray the story as a diplomatic crisis, with their personnel held ‘prisoner’ inside the embassy, and now they are celebrating their ‘release.’ This is an absurd twist on the story. This was nothing more than a criminal incident. Israel is expected to pay reparations to the family of the owner of the apartment who was killed in this incident.”