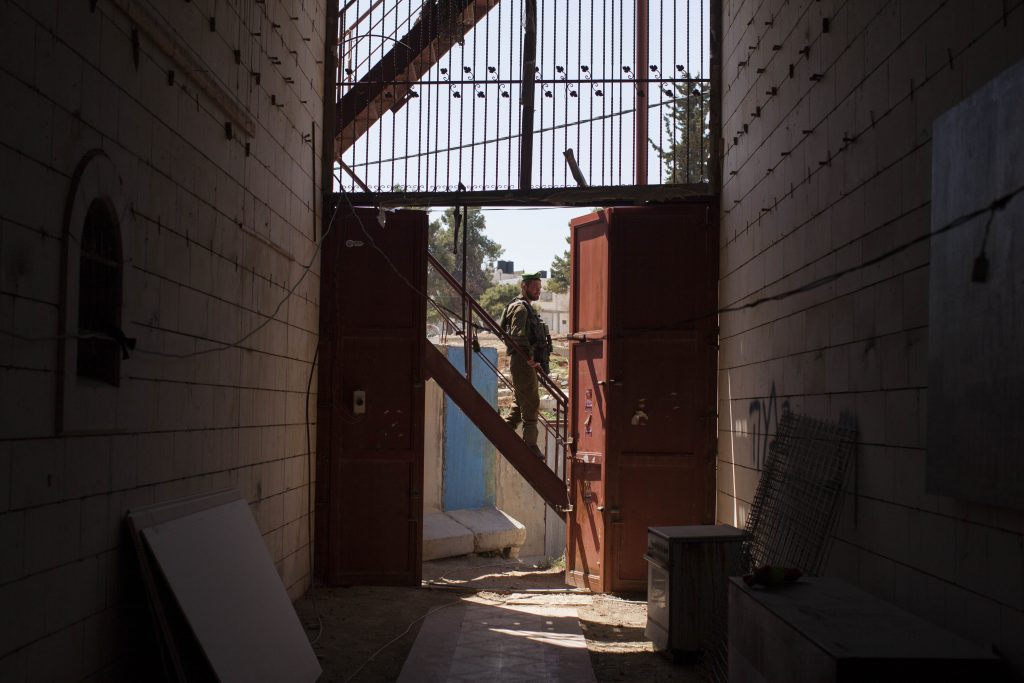 Some 100 Israelis who entered the Beit Machpelah building in Chevron were still there Wednesday morning, after Prime Minister Binyamin Netanyahu ordered Tuesday night that they be left alone – for now. But on Wednesday, the IDF declared the area around the building a “closed military zone” – a declaration usually made when preparations for a forced eviction from a site is being prepared.

Despite that news, residents of the building expressed optimism that they would be allowed to stay. “We passed a peaceful night,” senior activist Shlomo Levinger told Channel Two reporters from inside the building. “We have been getting a great deal of support for our actions, both from the IDF and the government. They, and we, call on the prime minister to end this farce and allow us to exercise our property rights.

“We have returned home and will remain here forever – we don’t believe the government will evict us this time,” Levinger said. “The question that must be asked is do Jews have property rights in the State of Israel in 2017. We expect the authorities to respect those rights.”

The saga of Beit Machpelah, adjacent to Me’aras Hamachpelah itself, goes back five years, when 15 Jewish families entered the building, claiming to have purchased it from a Palestinian agent representing the family. The sale was conducted informally and quietly, as the Palestinian Authority imposes the death penalty on Arabs who sell property to Jews – and indeed, that was the case in Beit Machpelah, with the PA arresting the agent, and then the owner, of the property. Meanwhile, other Palestinians claimed ownership, and said that they had never sold the home to Jews.

The response of the government – specifically the Defense Ministry, then headed by Ehud Barak – was to evict the Jewish residents and seal the building, a situation that remained extant until Tuesday, when the families that claimed ownership in 2012 returned. Since their eviction in 2012, the residents have appealed to various authorities for authorization to enter the building, but to no avail.

Numerous ministers have spoken out supporting the residents. “I congratulate the families who have entered the building and call on the prime minister and defense minister to let them stay,” said Yerushalayim Affairs Minister Ze’ev Elkin. Tourism Minister Yariv Levin said in a statement that “the scandal of Jews buying homes and then preventing them from living in the houses they have purchased should have ended a long time ago. The residents of Beit Machpelah should be allowed to stay, and the discrimination against them and other Jews must end.” According to Agriculture Minister Uri Ariel, “this is an important development. This is the best answer to the events of recent days. I am glad to see that despite the incitement against Jewish sovereignty in Yerushalayim, Jews are continuing to stake their claims in Chevron, the city of our forefathers.”