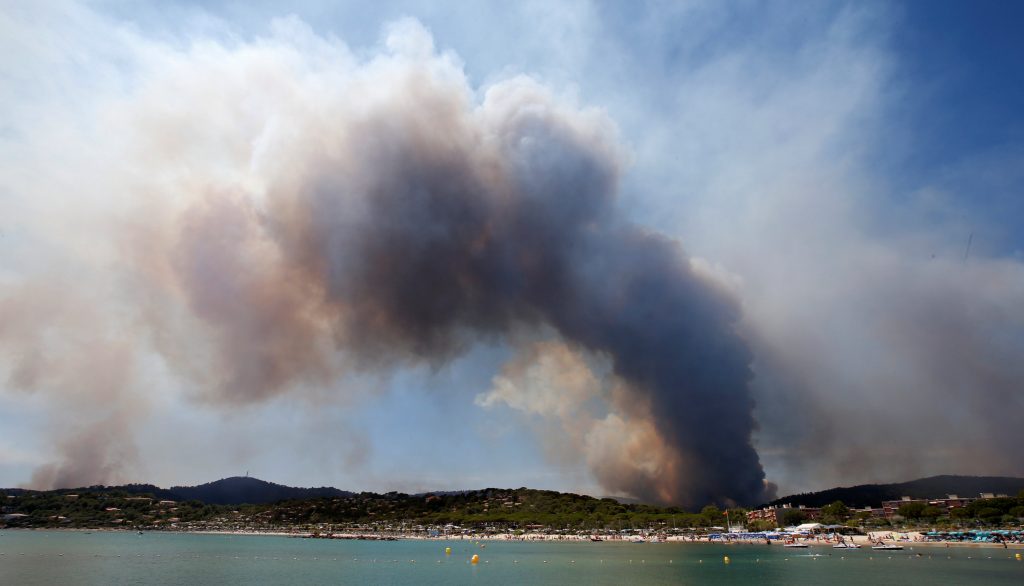 French authorities ordered the evacuation of up to 12,000 people around a picturesque hilltop town in the southern Cote d’Azur region as fires hopscotched around the Mediterranean coast for a third day Wednesday.

A raging wildfire began late Tuesday in the dry Mediterranean forests around La Londe-Les-Maures before being pushed by the southern Mistral winds to Bormes, a tourist magnet with houses clustered on a hill surrounded by dense forests of scrub and trees.

The local Var Matin newspaper reported that 12,000 people were forced to take refuge in gymnasiums and other places, including thousands of campers. It said some people sought safety on local beaches.

Col. Eric Martin of the Var firefighting unit said Wednesday on BFM-TV that nearly 600 firefighters were trying to contain the flames that had run through 1,300 hectares (3,210 acres) around the Riviera.

Four tracker planes and a fire-fighting aircraft were sent in as thick black smoke billowed above the skyline.

The airport in Toulon, a city 30 kilometers (18 miles) from La Londe, was briefly closed on Wednesday, as well the Fort de Bregancon, which sits on a rock off the coast of Bormes.

The wildfires began raging along France’s Mediterranean coast on Monday, forcing smaller, scattered evacuations with flames reaching a corner of Saint-Tropez. Since noon Tuesday, French firefighters had conducted about 100 operations.

Further east, reinforcements were sent in to battle a blaze in Artigues that burned up to 1,700 hectares (4,200 acres) of forest.

Another fire was contained Tuesday evening in La Croix Valmer after burning two villas, seriously injuring one firefighter and devouring about 500 hectares (1,235 acres).

France’s Mediterranean coast is particularly vulnerable to fires, with its massive back-country forests, often dry in the summer, and Mistral winds blowing across the sea to fan the flames. Smoke from the fires blew across bays on the picturesque coast, frightening some. But firefighters warned against panic — and unnecessary phone calls. No injuries have been reported among residents and vacationers.

Further south, flames ate through 2,000 hectares (4,950 acres) of forest on the northern end of the French Mediterranean island of Corsica, in what was the largest blaze in France.

Summer fires, propelled by high temperatures, winds and drought — and often caused by careless humans — are not new to Europe. Both Portugal and Italy were also battling blazes.

Almost 1,700 firefighters supported by 17 water-dropping aircraft were tackling wildfires in Portugal, where every summer large areas of woodland are scorched. The Portuguese Civil Protection Agency says emergency services have brought more than 20 forest blazes under control as high winds calmed during the night.

The worst fires were around the town of Macao, 200 kilometers (125 miles) northeast of Lisbon. Deputy mayor Antonio Louro said the fires have caused “catastrophic” damage to the livelihoods of farmers, many of who work in the region’s pine and eucalyptus forests.

In Italy, where fires have raged for weeks, firefighters responded to 26 requests for water and fire retardant air crops on Tuesday, throughout central and southern Italy, including Calabria, Sicily, Sardinia, Lazio and Puglia.

The Coldiretti agriculture lobby said 50 billion bees were destroyed along with their hives in fires on the slopes of Mount Vesuvius. Coldiretti said another 20 percent of the bee population is estimated to have become disoriented and died as a result.