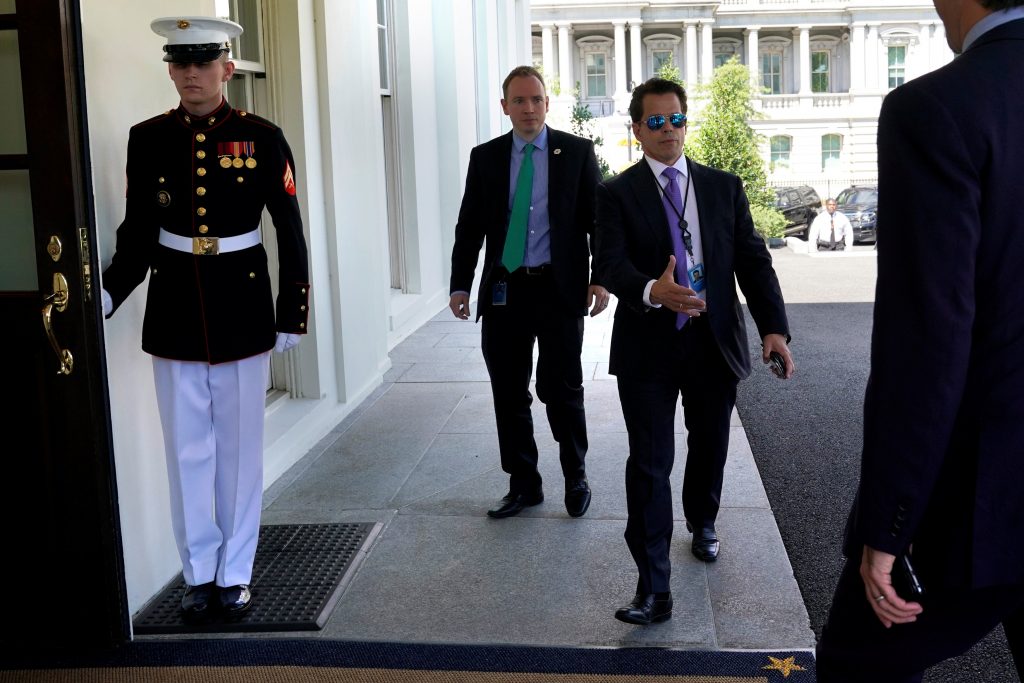 Anthony Scaramucci, the new White House communications director, threatened on Tuesday to fire his entire staff in an effort to stem the leaking that has plagued President Trump’s administration since almost the first day he took office.

“I’m going to fire everybody; that’s how I’m going to do it,” Scaramucci said. “You’re either going to stop leaking or you’re going to get fired.”

The first to leave the West Wing on Tuesday was senior assistant press secretary Michael Short, who resigned after a report emerged in Politico hours earlier saying that he would be fired in Scaramucci’s quest to uproot leakers.

Scaramucci, wearing blue-tinted aviator sunglasses and speaking to a small group of reporters in the White House driveway Tuesday morning, gestured to the guard booth on the outskirts of the complex to emphasize his threat.

Scaramucci entered the White House over the strenuous objections of both former White House press secretary Sean Spicer — who ultimately resigned in protest — and Chief of Staff Reince Priebus.

Despite publicly claiming that he and Priebus have a long and respectful working relationship, Scaramucci has made one of his first moves the launch of a broad overhaul of the press office, singling out Priebus allies — many of whom previously worked at the Republican National Committee — for further scrutiny.

An unofficial list of Priebus loyalists has been circulating among Scaramucci allies as those most likely to lose their jobs or be reassigned to somewhere else in the administration.

Asked about press reports that he has already begun to fire West Wing staffers, Scaramucci mentioned that name of a particular staffer floated in a news story as a likely candidate for firing, and said this was one of his frustrations with the leaks coming from the West Wing.

“This is actually a terrible thing,” he said. “The fact that you guys know about it before he does really upsets me as a human being and as a Roman Catholic, you got that? So I should have the opportunity, if I have to let someone go, to let the person go in a very humane, dignified way.”

Kellyanne Conway, counselor to the president, said that in a meeting of White House communications staff, Scaramucci had promised all aides “a clean slate” and “amnesty” to prove that they are not leaking and working hard to defend the president and support his agenda.

But Scaramucci also made clear “1,000 percent” that he is prepared to fire any communications staffer he suspects of disloyalty. “I’ve got the authority from the president to do that,” he said.

Typically, the job of firing staffers — even those in the press shop — would be left to the chief of staff, but Priebus has found himself increasingly isolated in recent days, with few areas of the White House reporting directly to him.

Referring to Sarah Huckabee Sanders, who was promoted to White House press secretary Friday in the wake of Spicer’s resignation, Scaramucci added that he is willing to upend his entire team and rebuild it from scratch.

“If I’ve got to get this thing down to me and Sarah Huckabee,” he said. “Then the leaking will stop.”