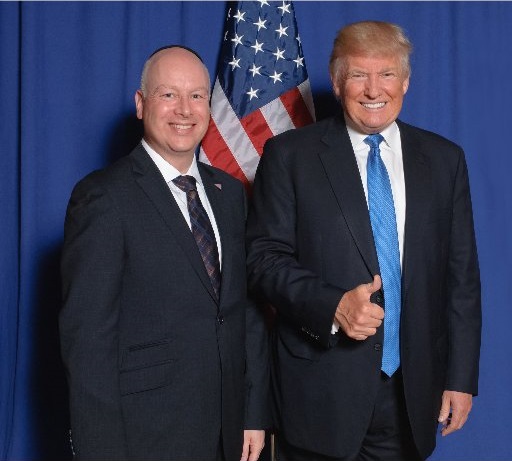 Although President Donald Trump has played no public role in the tensions afflicting the Middle East in recent days, his envoys, acting on his personal instructions, were instrumental in defusing the crisis between Israel and Jordan, according to a report in Haaretz on Tuesday.

On Sunday night, as the standoff between Yerushalayim and Amman over the fate of the security guard who shot a Jordanian assailant appeared to take on a grim intransigence, with Jordanian troops cordoning off the embassy compound, Israeli Prime Minister Binyamin Netanyahu sought help from the U.S. His attempts to reach King Abdullah, who was in the U.S. at the time, were unsuccessful.

Israel’s ambassador to the U.S. Ron Dermer called Pres. Trump’s senior adviser, Jared Kushner and special peace process envoy Jason Greenblatt to request help. A senior Israeli official was quoted as saying that Kushner and Greenblatt briefed Trump on the Jordanian situation, and that the president then directed the two to intervene to prevent the crisis from escalating.

Kushner reportedly made contact with Abdullah and other high-level officials, proposing among other things that the Israel embassy staff, including the guard, be allowed to leave Jordan.

At the same time, Trump dispatched Greenblatt to the region to help resolve both the embassy and the Har HaBayis crises. At the White House’s instructions, the acting American ambassador to Jordan also spoke with Jordanian Foreign Ministry officials and security officers to enlist them in bringing the matter to a quick end.

“We decided to quickly approach the highest level officials because we understood this was a volatile situation and that we had to end the crisis as soon as possible,” said a senior Israeli official. “The Americans were very helpful and play a significant role in resolving the embassy crisis.”

On Tuesday morning, Friedman summed up the affair at a meeting of the Knesset caucus for Israeli-American relations:

“We had a situation in Jordan that could have gone bad,” Friedman said. “With the work of officials in the U.S., together with the prime minister of Israel and King of Jordan, without a lot of noise and fanfare and with careful deliberation, we were able to defuse a very difficult situation very quickly that under different circumstances wouldn’t have been resolved.”