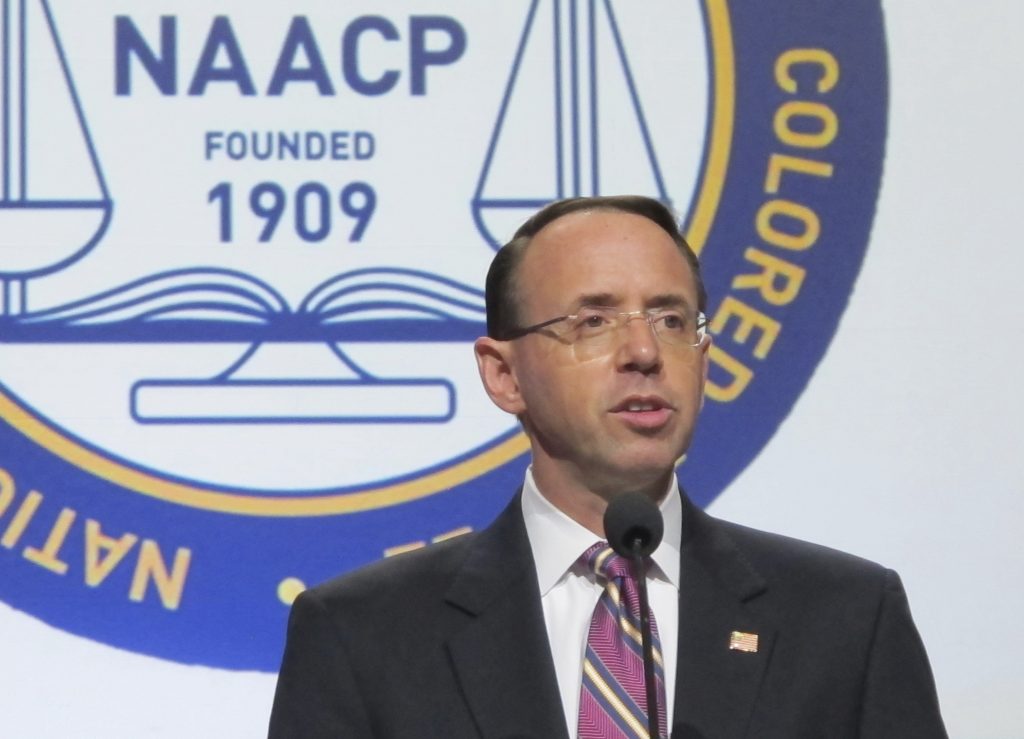 Deputy U.S. Attorney General Rod Rosenstein told the nation’s oldest civil rights organization on Tuesday that building public confidence in law enforcement “is one of our great challenges.” He said police have a special responsibility to follow the law, and citizens have an obligation to respect the police.

Rosenstein spoke to the NAACP’s national convention in Baltimore, a city that experienced unrest following the 2015 death of Freddie Gray in police custody. Rosenstein, a former Maryland U.S. attorney, noted that one of the last cases he prosecuted before leaving Baltimore was against seven police officers for abusing their authority. Last week, two of those officers who allegedly robbed people who were physically restrained pleaded guilty to racketeering conspiracy. The case continues against the other five.

Rosenstein said prosecuting corrupt police is critical, but emphasized that most police are public servants who want to help.

“Cases like that are extremely important, but those corrupt officers do not represent all of police,” Rosenstein said. “Most officers are honorable people who try every day to do the right thing, but we need them to be role models. They have a special responsibility to follow the rules.

“At the same time, citizens have an obligation to show respect for the police,” he said. “Building a good relationship is a two-way street. We all need to help build relationships based on mutual respect.”

Rosenstein also told the audience that a Justice Department task force on crime reduction and public safety will deliver preliminary recommendations this week, with a final report released to President Donald Trump next year. He said the department is developing new programs and strategies to work better with communities and state and local agencies to reduce crime.

“Our goal is not to fill prisons. Our goal is to save lives,” Rosenstein said, a comment that brought applause from the audience. “And to do that, building public trust in law enforcement is one of our great challenges.”

Rosenstein, the No. 2 official at the Justice Department, spoke after Trump declined a speaking invitation, which led the nation’s oldest civil rights organization to question the president’s commitment to his African-American constituents. Trump was the first GOP presidential nominee in years not to address the NAACP last year. Republican nominees John McCain in 2008 and Mitt Romney in 2012 both addressed the NAACP convention before losing to Barack Obama in the general elections.

The Rev. Jesse Jackson spoke after Rosenstein and criticized the president.

The 108th convention of the NAACP began last week and runs through Wednesday.