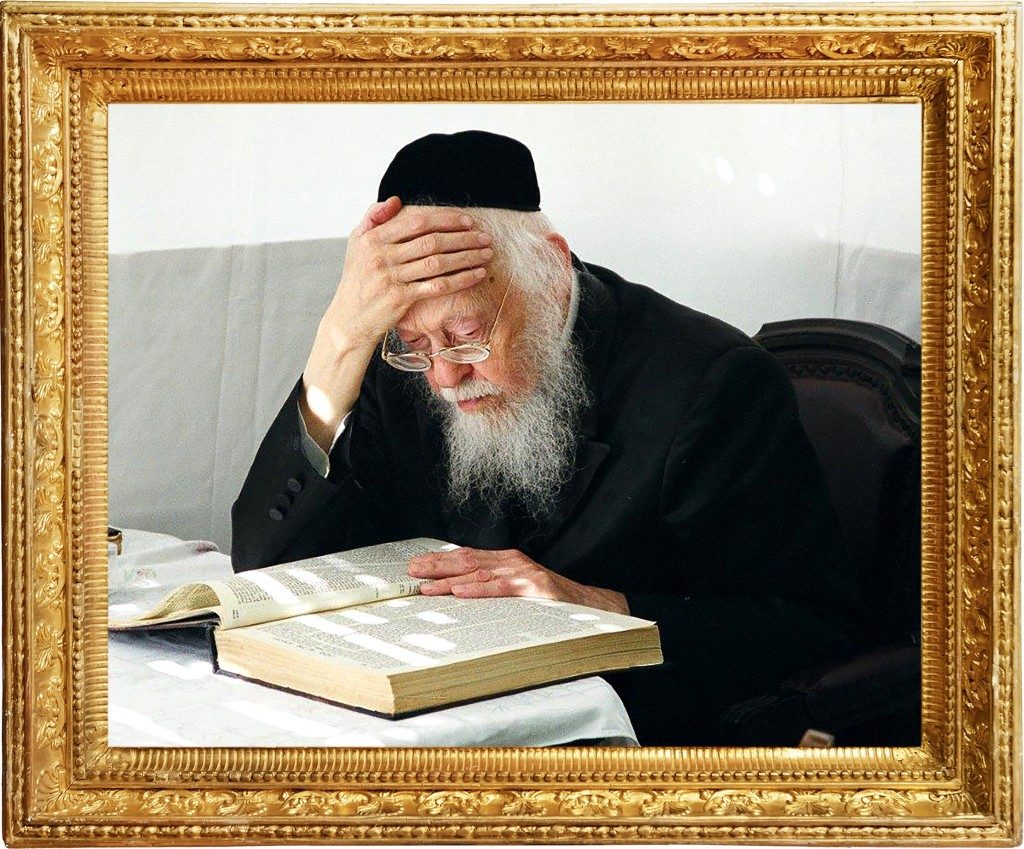 Marking 5 years since the petirah of Harav Elyashiv, zt”l

The hasmadah (concentration) of Hagaon Harav Yosef Shalom Elyashiv, zt”l, was legendary. His room could be filled with visitors noisily taking pictures of him, there could be a great tumult reigning all around, yet he didn’t even notice any of it. Engrossed in his learning, he didn’t hear anything — other than that which he wanted to hear.

A widowed neighbor who didn’t put up a hot water kettle before Shabbos would come every Shabbos morning to get a cup of hot water. She would knock on the window, and Rebbetzin Elyashiv, a”h, would pass the cup of water out to her. After the petirah of the Rebbetzin, a different daughter would spend each Shabbos with their illustrious father. The almanah would come by, knock so softly on the window that no one in the house heard her — except Rav Elyashiv, who would urge a household member to give her the cup of water. As always, he was sitting and learning, oblivious to everyone and everything, but he heard the widow’s timorous knocks!

Five years have now passed since the petirah of this legendary Torah giant, and this irreplaceable loss is keenly felt every day. Poskim throughout the world saw Rav Elyashiv as the final authority in Halachah, the source for the answers on the thorniest contemporary halachic dilemmas.

Our only consolation is the fact that the thousands of halachic rulings that he gave in his lifetime, and the many lessons he taught by his personal example, continue to illuminate the Torah world.

Few contemporary individuals so symbolized the study of Torah as Rav Elyashiv. Throughout his long life, his hasmadah and selfless dedication to Torah were legendary every day of the year.

During Sheloshes Yemei Hagbalah, he would cut down on the amount of time he would see visitors seeking responses to halachic inquiries, in order to spend even more time learning.

Shavuos — the Yom Tov of Kabbalas haTorah — was a highlight of the year for Rav Elyashiv.

His family was taken aback, however, to find that on Shavuos night, when all of Klal Yisrael stayed up all night learning, Rav Elyashiv would actually go to sleep at the same time he did every night — and arise, as always, hours before dawn.

“I made a cheshbon that if I stay up all night, in the end I would lose out on 15 minutes of learning Torah,” Rav Elyashiv explained.

Rav Elyashiv was clearly cognizant of the great benefits of staying up all night on Shavuos, but was unwilling to lose out on 15 minutes of learning!

The next day, when those who had stayed up at night sought to catch up on their sleep, Rav Elyashiv learned from after vasikin until the midday seudah, and immediately after the seudah until Minchah — and from after Minchah until Maariv.

He once remarked that the learning of Torah must always be accompanied by acts of chessed, for if one does not engage in chessed, his Torah is also broken and not complete.

In response to a query, Rav Elyashiv explained that he personally engaged in chessed through his closing of the Gemara twice a day for kabalas kahal, to rule on the various questions in Halachah and hashkafah that were brought to him.

“Kabalas kahal is very difficult for me, for it takes me out of my learning and necessitates my concentrating on the words of the questioners.”

Every aspect of his conduct, every word he uttered was carefully calculated.

Rav Elyashiv once explained that gratitude — hakaras hatov — was a middah (a character trait) and not a chov (an obligation). His explanation of the difference between these two terms was telling.

There are situations when one is exempt from what otherwise is a chiyuv, such as when, due to circumstances beyond his control, a person is unable to fulfill his obligation. But when it is a matter of a middah, a trait that is meant to be engraved in the heart and soul of a Yid, there are no exemptions.

During a period of time when Rav Elyashiv was too weak to even go to shul to daven, Rabbi Uri Lopiansky, the head of Yad Sarah, made a simchah.

When Rav Elyashiv told his family that he wished to attend, they informed him that his frail condition did not allow him to do so.

“But I owe him hakaras hatov, he brought me the walker that makes it easier for me to walk.”

When they pointed out that Yad Sarah lends out walkers and medical equipment to anyone in need, and that Rav Elyashiv had already “repaid” Rabbi Lopianski on numerous occasions, Rav Elyashiv would not be swayed.

“Hakaras hatov is a middah, not a chov, there are no exemptions.”

(Adapted in part from the sefer Gedolah Shimushah.)

We no longer have the merit to pose new questions to Rav Elyashiv, but his Torah — and his personal example — continue to be a most powerful source of inspiration for all of Klal Yisrael.