Microsoft Is Keeping Paint After All 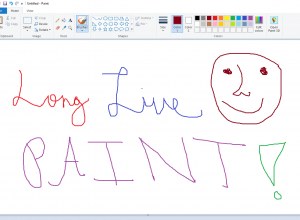 After an outcry of longtime aspiring digital artists, Microsoft had a change of, umm, art, and said it would not discontinue the classic program.

“MS Paint is not going away,” Calli Rose, Microsoft spokesperson said in an email. “In addition to the new 3D capabilities, many of the MS Paint features people know and love like photo editing and 2D creation are in Paint 3D–the new app for creativity, available for free with the Windows 10 Creators Update. In the future, we will offer MS Paint in the Windows Store also for free and continue to provide new updates and experiences to Paint 3D so people have the best creative tools all in one place.”

The reversal came after word spread Monday that Microsoft planned to push Paint out of its software picture, putting it on a list of “deprecated” features that would be included in the company’s Windows 10 Fall Creators Update, set to be released this fall. The categorization meant that Paint would be available as part of the software package come autumn, but that it would no longer be subject to active development and could go away.

The label led to numerous tweets from longtime users who took to the program to paint how they were feeling. The hashtag “RIPMSPaint” was also trending throughout the day.

Microsoft later published a blog post saying the outcry of fan support led the company to change its mind on Paint.

“Today, we’ve seen an incredible outpouring of support and nostalgia around MS Paint,” Microsoft said in its blog post. “If there’s anything we learned, it’s that after 32 years, MS Paint has a lot of fans. It’s been amazing to see so much love for our trusty old app.”

Paint launched on the company’s original Windows 1.0 program back in 1985. Over the years it became a staple on Microsoft software programs, winning aspiring artists over for its simplicity.

In October 2016, Microsoft launched Paint 3D, which was the biggest upgrade the program ever received and allowed users to share their work in an online community. It removed its 3D Builder app for the fall update and encouraged users to use Paint 3D instead.

Other programs Microsoft had marked for death on Monday were Outlook Express and its Reader app, which will be merged to a be a part of its Edge Web browser. Neither were met with the level of protests that Paint generated.