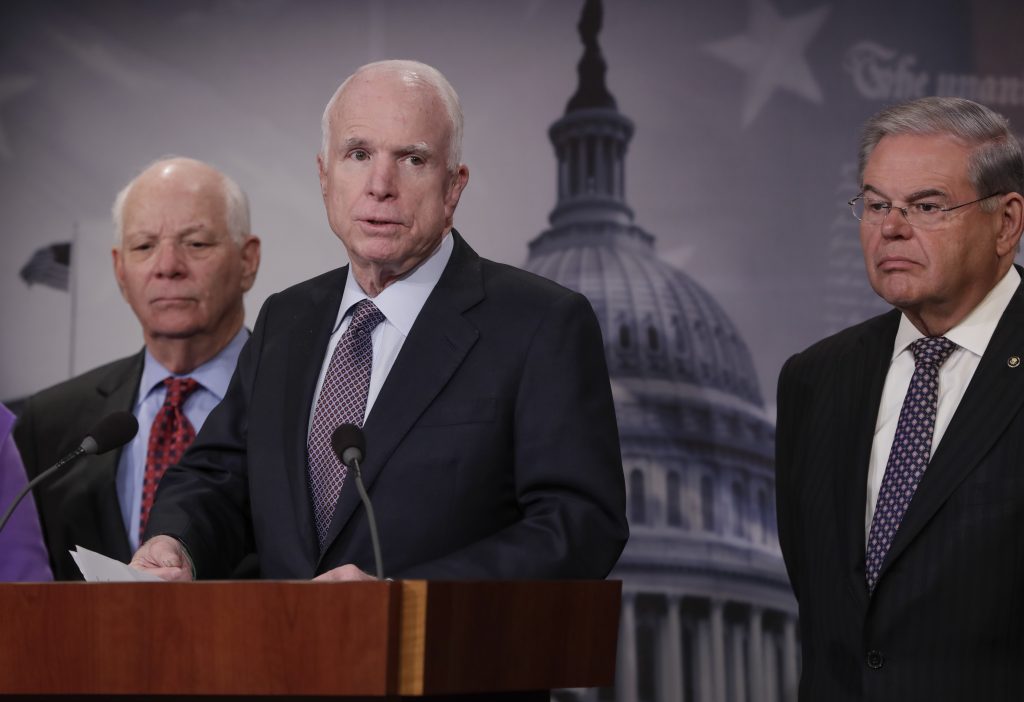 The U.S. House of Representatives voted overwhelmingly on Tuesday to slap new sanctions on Russia, Iran and North Korea, despite President Donald Trump’s objections to the legislation.

The sanctions bill coincided with lawmakers taking steps to show they are willing to push hard as they investigate possible meddling by Russia in the 2016 presidential election and potential collusion by Republican Trump’s campaign.

The Trump administration has objected to a provision that would oblige the president to obtain congressional approval before easing any sanctions on Moscow.

The Senate Judiciary Committee said on Tuesday it wanted Paul Manafort, a former campaign manager for Trump, to appear at a hearing as part of its investigation.

Also on Tuesday, Trump’s son-in-law, Jared Kushner, spent three hours with the House of Representatives intelligence panel, his second straight day on Capitol Hill answering questions about his contacts with Russians during the campaign.

Moscow has denied it worked to influence the election in the Republican candidate’s favor, and Trump has denied his campaign colluded.

The sanctions bill, passed 419 votes to 3 in the House, must also pass the Senate before it can be sent to the White House for Trump to sign into law or veto.

The bill, which had the support of both Republicans and Democrats in the House, aims to punish Russia for its 2014 annexation of Crimea from Ukraine and over conclusions by U.S. intelligence agencies that it interfered in the U.S. election.

An earlier version was passed overwhelmingly by the Senate, but there are differences between the two measures that must now be worked out.

The measure’s fate in the Senate is uncertain. A spokesman for John Cornyn, the no. 2 Republican, said on Tuesday there had been no decision on when the Senate might begin to consider the House bill.

Republican Senator Bob Corker, chairman of the Senate Foreign Relations Committee, told reporters on Monday there were still issues under discussion and that any announcement about a deal to move the bill forward “seemed somewhat premature.”

The White House has said the president had not yet decided whether he would sign the measure, which would potentially hamper Trump’s hopes of pursuing improved relations with Moscow.

Rejecting the bill would carry a risk that his veto could be overridden by lawmakers.

Late on Monday, White House spokeswoman Sarah Sanders said Trump was still studying the bill and considering whether he would support it.

The bill has raised concerns in the European Union, where the legislation could result in fines for companies helping Russia build gas pipelines like the 9.5 billion euro ($11.1 billion) Nord Stream 2 project.