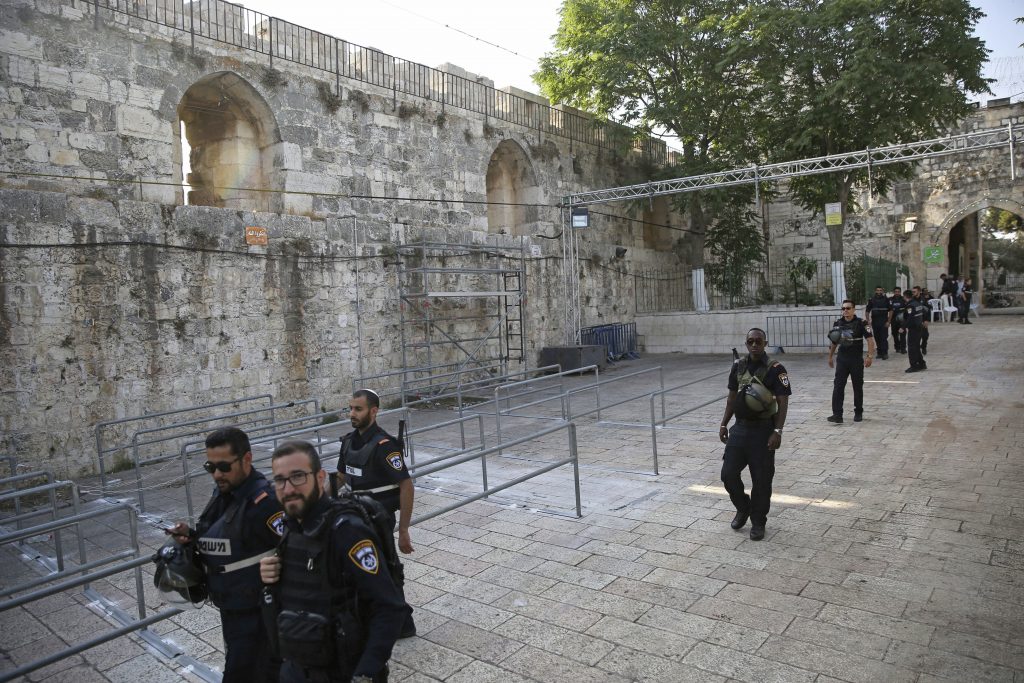 Coalition MKs on the right expressed bitterness and anger over the government’s decision to remove all security measures from the entrances to Har HaBayis. As of Tuesday morning, Arabs are able to enter Har HaBayis freely, with no security checks at all – just as they were before the incident that prompted the placement of the security measures, the murder of two Israeli police officers by terrorists who hid weapons and took refuge on Har HaBayis nearly two weeks ago. In their place, an array of “smart cameras and sensors” will be set up, although this system is not ready yet, police said.

In a social media post, Culture and Sports Minister Miri Regev called the decision “very regrettable. You don’t have to be a security expert to realize that the body scanners prevented terror activity and enhanced security.”

MK Bezalel Smotrich (Jewish Home) said that as far as he was concerned, the coalition agreement between his party and the government was over. “As I indicated before, after the capitulation by the Prime Minister to terror and violence by making this dangerous decision, I can no longer vote with the coalition,” he wrote in a social media post.

Deputy Defense Minister Tzippy Hotovely (Likud) said in an interview with Reshet Bet that “placing the security measures on Har HaBayis was a perfectly legitimate act. When the Arabs want to riot they can find plenty of reasons.

According to Jewish Home MK Shuli Muallem-Refaeli, the Arabs “got us down on our knees. We will all live to regret the Cabinet’s decision. The Palestinians, and the Islamic Movement, have proven to themselves that they can use violence to get their way. The worst part of it is that we have declared that we are not sovereign over Har HaBayis – the entire reason that the Jewish state is here and not in Uganda.”

Speaking to Army Radio, Agriculture Minister Uri Ariel said that the decision was a dangerous one. “This kind of reversal harms us,” he said. “This is a dangerous decision for all Israelis.”

Zionist Camp/Labor Party chairman Avi Gabay said that he supported the Cabinet decision. “We cannot allow three terrorists to change our policies,” he told Israel Radio. “We can retain sovereignty on HaBayis and still act reasonably.”

Yesh Atid head Yair Lapid criticized the way the decisions – to place the security equipment, then to remove it – as “rash and unprofessional. These kind of decision cannot be made suddenly, on the basis of a phone call, but must include a discussion of all security officials involved.”

Arab MKs expressed satisfaction with the decision, although they criticized the decision to set up an array of “smart cameras” that police promised would be placed at the site. “Such cameras would be a new provocation against worshippers. It is time that the government of Israel treat the Al-Aqsa mosque as the holy place that it is. These ongoing provocations will yet lead to bloodshed.”