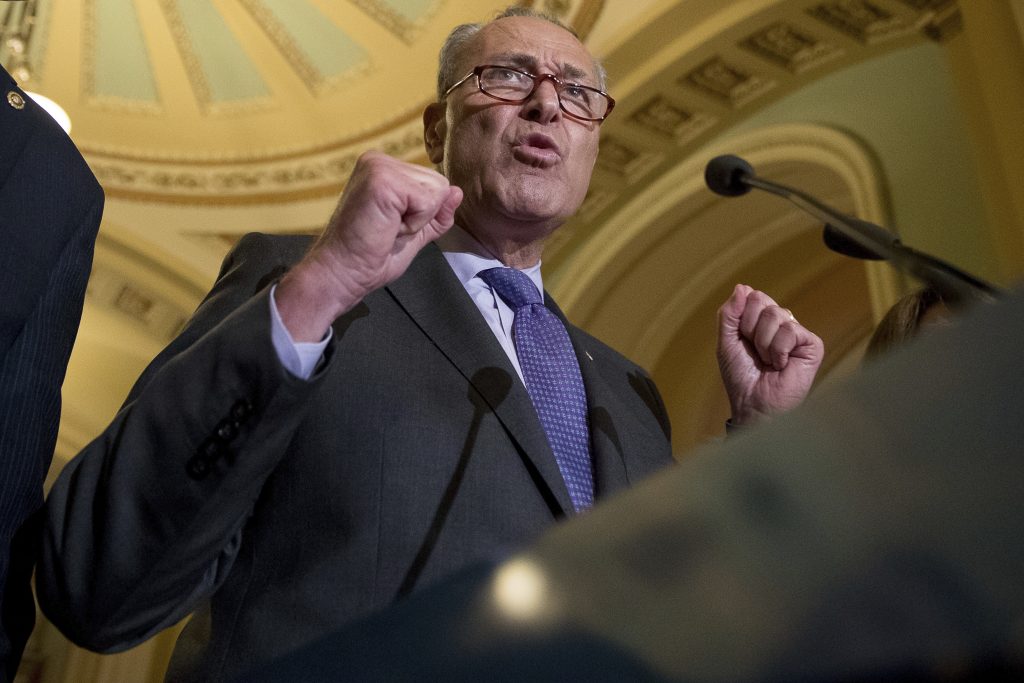 Congressional Democrats launched a progressive-leaning economic agenda Monday as they try to wrestle the populist mantle from President Donald Trump ahead of the 2018 midterm election.

Leaders of the House and Senate — along with top lawmakers, including Sen. Elizabeth Warren (D-Mass.) — believe their “Better Deal” platform of higher wages, child care support and job training will appeal to working families and those who abandoned the party last year to elect Trump.

“In the last two elections, Democrats, including in the Senate, failed to articulate a strong, bold economic program for the middle class and those working hard to get there,” wrote Senate Minority Leader Charles E. Schumer (D-N.Y.) in an op-ed in the New York Times.

“We also failed to communicate our values to show that we were on the side of working people, not the special interests. We will not repeat the same mistake. This is the start of a new vision for the party.”

House Minority Leader Nancy Pelosi pointed her criticism at Trump and Republicans, who control both the House and Senate, for spending their first six months of GOP control “trying to raise Americans’ health costs to fund tax breaks for billionaires.”

“Democrats have a better approach,” she wrote in The Washington Post.

Democrats headed to rural Berryville, Va., which is just the kind of outside-the-Beltway swing district, now held by Republican Rep. Barbara Comstock, that Democrats hope to flip in the 2018 midterm.

Democrats need to pick up 24 seats to control the House, which some analysts believe is possible because the party in the White House tends to lose as many seats in midterm elections.

The “Better Deal” agenda is filled with the kind of populist rhetoric championed by Trump — and progressive favorites Warren and Sen. Bernie Sanders (I-Vt.) — as it promises policies that aim to appeal to voter unrest over corporate “monopolies” and the “rigged” economy. It promises a government “on the sides of all Americans, not just those at the top.”

As the minority party, the plan is merely a blueprint for future governing, rather than a legislative to-do list.

Republicans, under Speaker Paul D. Ryan, presented a similar document last year — “A Better Way” — that was an aspirational check list of legislative goals to accomplish if in power.

Passing bills is a heavier political lift, but both parties use such documents as calling cards in the run up to the campaigns ahead.

“The feeling is that this is what we should be talking about,” said Rep. Cheri Bustos (D-Ill.), part of the team that helped draft the document.

Bustos is that rare Democrat, among 12 in the House, who represents a district where voters elected Trump but also gave the Democrat another term in Congress.

“They feel like folks in Washington see this whole thing as a game — winners and losers — at the expense of people back home,” she said in an interview. “People have the feeling that things are stacked against them.”

She added, “It’s our message to build an America where working people know we have their back.”