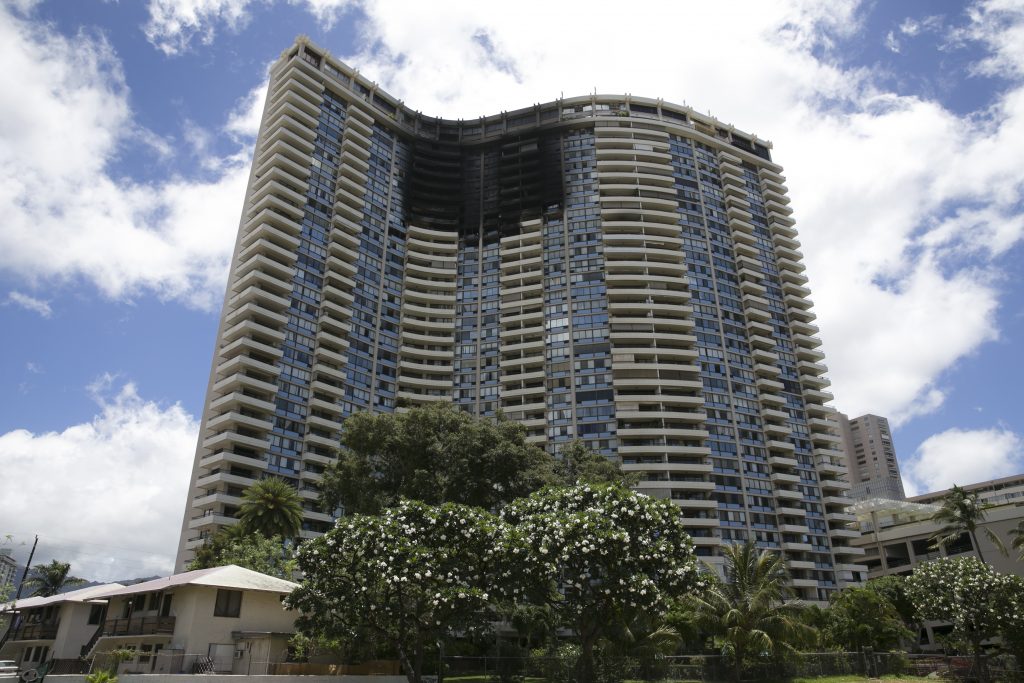 When Moon Yun Pellerin’s parents bought a 27th-floor apartment in a high-rise overlooking Waikiki about 15 years ago, they didn’t realize the wave-shaped building had no fire sprinklers.

“We didn’t even consider it,” Pellerin said.

But a week after a massive fire broke out one floor below her apartment, killing three neighbors, Pellerin and her family “definitely want sprinklers” installed — even if it means spending thousands of dollars.

The Marco Polo Apartments were built in 1971, before sprinklers became mandatory for new construction in Honolulu.

Across the United States, cities have a mixed bag of laws on whether older high-rise apartment buildings must install fire sprinklers that weren’t required when the towers were first built. Many — including New York, Chicago, Dallas and San Francisco — still have high-rises without the safety measure.

Cost is often cited. But after Honolulu’s deadly July 14 fire, some question whether financial concerns outweigh the potential for tragedy.

Here’s a look at how the sprinkler debate is playing out in several U.S. cities:

In the inferno’s aftermath, Honolulu’s fire chief said sprinklers would have contained the blaze to the unit where it started, possibly saving the lives of those who died in nearby apartments. Mayor Kirk Caldwell introduced a bill a few days later that would require all high-rises to have sprinklers, even older ones.

“I don’t know what it’s going to take for apartment owners as well as associations to see the value of human life,” said Hawaii state Sen. Glenn Wakai, who plans to introduce legislation offering homeowners incentives to install sprinkler systems.

The fire was not the first one at the 36-story Marco Polo building — and not the first time the question of installing sprinklers has come up. After a 2013 fire, the building’s association asked an engineering firm for cost estimates to replace the fire alarm system and install sprinklers.

The company concluded it would be about $8,000 per unit to install sprinklers, or about $4.5 million for the whole building. Sprinklers were never installed.

“It’s a tough issue for these associations because they are grappling with a lot of different costs,” said Evan Fujimoto, president of the Building Industry Association of Hawaii. “When you’re dealing with an association, you might have 500 different people. How do you get people to agree on it?”

Constraints on city and state budgets also play a role.

Wakai first introduced legislation in 2005 after another deadly fire, proposing incentives that would cover 35 percent of the cost. But the budget was tight, and the bill ultimately failed after the incentive was reduced to just 5 percent.

A pair of deadly 2015 fires in San Francisco prompted city leaders to look at requiring automatic sprinklers in older residential buildings. But the idea faltered after landlords and officials raised concerns about the cost and logistics.

“The sprinklers work — we know that — but the problem is, you’ve got these old buildings, and it’s expensive, and there’s going to be resistance on the part of the landlords,” said Tommi Avicolli Mecca, director of counseling programs at the Housing Rights Committee of San Francisco.

In 1993, San Francisco required that high-rise commercial buildings and tourist hotels be retrofitted with sprinklers, but the mandate excluded residential and historical buildings.

In Chicago, a fire that killed six people at a downtown county government building in 2003 prompted officials to enact a host of safety measures.

Just weeks after the fire, in which victims died in stairwells after doors locked behind them, the City Council passed an ordinance requiring that the doors of the high-rises remain unlocked.

Two years later, the city passed what is called the Life Safety Evaluation Ordinance, which requires residential buildings 80 feet (24 meters) or higher that were built before 1975 to be equipped with various safety features such as voice communication systems and fire-rated doors and frames in stairways. But it does not require them to retroactively install sprinklers.

The city requires most of its older commercial buildings to be retrofitted with sprinklers, but not residential buildings.

New York City requires sprinkler systems in new construction and in older commercial towers. But it mandates residential high-rises to retroactively install sprinklers only if they undergo significant renovations or change the building’s use, according to the city’s Department of Buildings.

Alan Schulkin, 68, lives in a 39-story building in Manhattan’s Tribeca neighborhood that was built in the 1970s and does not have sprinklers.

“If (sprinklers) save lives and there’s one fire, of course it’s worth it,” Schulkin said.

The city of Dallas said the fire department has 89 high-rise residential structures on record, and 23 have some but not complete sprinkler coverage.

Three residential high-rise buildings in the city have no sprinklers at all, though they met the requirements of building and fire codes in effect when they were constructed, officials said.

If a structure’s occupancy use stays the same, and the building has had no significant renovations, the requirements of the code under which it was built continue to stand, the city said.