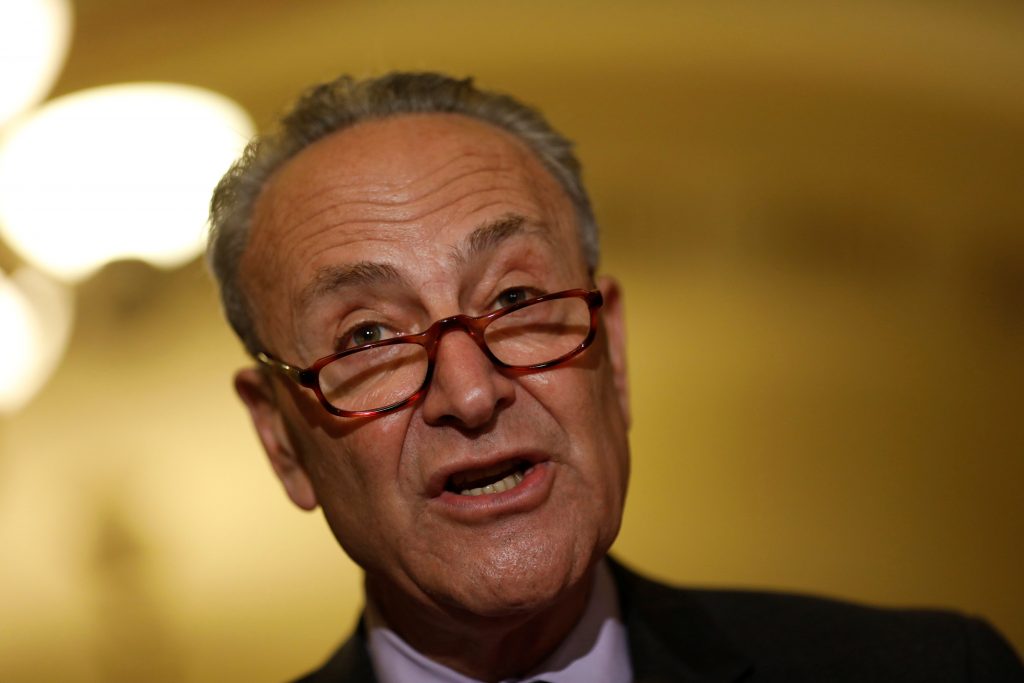 Senate Democratic leader Chuck Schumer said President Donald Trump would trigger “a cataclysm” if he fires Special Counsel Robert Mueller or pardons himself, even as one of the president’s lawyers said pardons aren’t being discussed.

Schumer said he can’t imagine his Republican colleagues, including Senate Majority Leader Mitch McConnell and House Speaker Paul Ryan, “just standing by” if Trump moves to dismiss Mueller or pardons himself or someone close to him who’s under investigation.

“It would be one of the greatest, greatest breaking of rule of law, of traditional democratic norms of what our democracy is about,” Schumer said on ABC on Sunday. “It would cause a cataclysm in Washington.”

While the president has the constitutional power to grant pardons — though the U.S. Supreme Court probably would have to decide whether he could pardon himself — his legal team isn’t having conversations with him about it, Jay Sekulow, one of Trump’s personal attorneys, said on ABC.

“We’re not researching the issue because the issue of pardons is not on the table,” Sekulow said. “There’s nothing to pardon from.”

The president and members of his inner circle are facing Congressional and FBI investigations of possible collusion with Russia in its interference with the 2016 presidential election. Mueller is also examining a broad range of transactions involving Trump’s businesses as well as those of his associates, a person familiar with the probe said.

Trump suggested in an interview with the New York Times on July 19 that Mueller would cross “a red line” if he looked into those issues, and the president mentioned pardons as part of a series of early-morning Twitter posts on Saturday.

“While all agree the U.S. President has the complete power to pardon, why think of that when the only crime so far is LEAKS against us,” Trump told his 34.3 million followers on Twitter.

Anthony Scaramucci, whom Trump named his new communications director on Friday, called the focus on Russia “overblown.” He said on Fox News that the president brought up the issue of pardons in the Oval Office last week and said that he doesn’t need to use it.

“There’s nobody around him that has to be pardoned,” Scaramucci said. “He was just making the statement about the power of pardons.”

Trump “in all likelihood” has the power to pardon himself, but it’s not a good idea, Republican Sen. Rand Paul of Kentucky said on CNN. “In a political sphere, I would caution someone to think about pardoning themselves or family members,” Paul said.

Trump also has suggested on Twitter that Mueller and members of his legal team have conflicts of interest because of donations to Democratic political candidates — something Scaramucci, daughter Ivanka Trump and the president himself have done in the past.

Sekulow said while Trump’s legal team is monitoring potential conflicts, it hasn’t raised any with Rod Rosenstein, the deputy attorney general who appointed Mueller after Attorney General Jeff Sessions recused himself from the Russia investigation.

“We’re going to be constantly evaluating that situation,” Sekulow said on ABC. “And if an investigation were to arise, and we thought that the conflict was relevant, we would raise it without question.”

Only Rosenstein can fire Mueller, and he’s said he won’t do it without “good cause.” So Trump would first have to purge the upper ranks of the Justice Department until he finds someone willing to follow his orders and dismiss the special counsel.

Trump is “clearly worried” about what Mueller may unearth about the Trump Organization and what’s concerning is “anything that could be held over the president’s head that could influence U.S. policy,” Rep. Adam Schiff of California, the top Democrat on the House Intelligence Committee, said on CBS’ “Face the Nation”.

Schiff said he’d also be worried if Trump wants Sessions out so he can name a new attorney general to supervise Mueller’s investigation.

“If this is part of a longer-term stratagem to define or confine the scope of the Mueller investigation, that would be very concerning,” Schiff said.

Sen. Susan Collins, R-Maine, said even if Trump is frustrated by the Russian probe, he should stop talking about the special counsel, Mueller’s staff, or the investigation.

“I know it’s hard, but he needs to step back and not comment, and let Bob Mueller, who is an individual with the utmost integrity, carry out the investigation and make his determination,” Collins said on CBS.