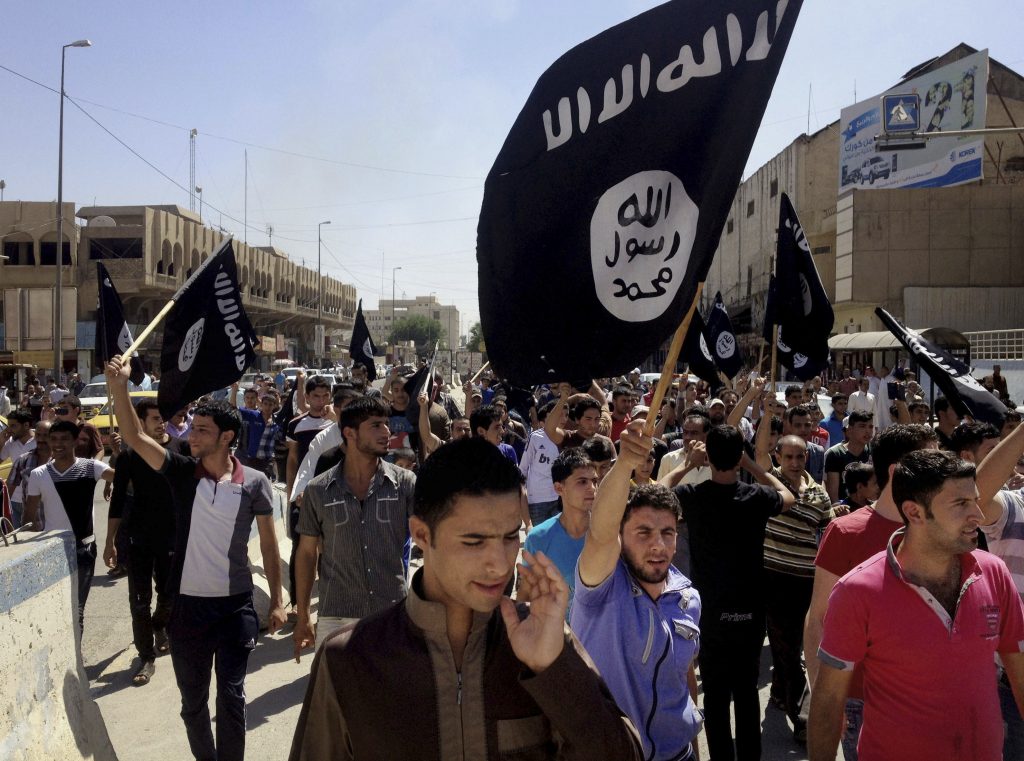 On the day Islamic State overran the Iraqi city of Mosul in 2014, it laid claim to one of the greatest weapons bonanzas ever to fall to a terrorist group: a large metropolis dotted with military bases and garrisons stocked with guns, bombs, rockets and even battle tanks.

But the most fearsome weapon in Mosul on that day was never used by the terrorists. Only now is it becoming clear what happened to it.

Locked away in a storage room on a Mosul college campus were two caches of cobalt-60, a metallic substance with lethally high levels of radiation. When contained within the heavy shielding of a radiotherapy machine, cobalt-60 is used to kill cancer cells. In terrorists’ hands, it is the core ingredient of a “dirty bomb,” a weapon that could be used to spread radiation and panic.

Western intelligence agencies were aware of the cobalt and watched anxiously for three years for signs that the militants might try to use it. Those concerns intensified in late 2014 when Islamic State officials boasted of obtaining radioactive material, and again early last year when the terrorists took over laboratories at the same Mosul college campus with the apparent aim of building new kinds of weapons.

In Washington, independent nuclear experts drafted papers and ran calculations about the potency of the cobalt and the extent of the damage it could do. The details were kept under wraps on the chance that Mosul’s occupiers might not be fully aware of what they had.

Iraqi military commanders were apprised of the potential threat as they battled Islamic State fighters block by block through the sprawling complex where the cobalt was last seen. Finally, earlier this year, government officials entered the bullet-pocked campus building and peered into the storage room where the cobalt machines were kept.

They were still there, exactly as they were when the Islamic State seized the campus in 2014. The cobalt apparently had never been touched.

“They are not that smart,” a relieved health ministry official said of the city’s former occupiers.

Why the Islamic State failed to take advantage of their windfall is not clear. U.S. officials and nuclear experts speculate that the terrorists may have been stymied by a practical concern: how to dismantle the machines’ thick cladding without exposing themselves to a burst of deadly radiation.

More certain is the fact that the danger has not entirely passed. With dozens of Islamic State stragglers still loose in the city, U.S. officials requested that details about the cobalt’s current whereabouts not be revealed.

They also acknowledged that their worries extend far beyond Mosul. Similar equipment exists in hundreds of cities around the world, some of them in conflict zones.

“Nearly every country in the world either has them, or is a transit country” through which high-level radiological equipment passes, said Andrew Bieniawski, a vice president for the Washington-based Nuclear Threat Initiative who once led U.S. government efforts to safeguard such materials.

A LETHAL DOSE IN THREE MINUTES

The worries began within hours of the Islamic State’s stunning blitz into Iraq’s second-largest city.

As TV networks showed footage of triumphant terrorists parading through Mosul’s main thoroughfares, intelligence agencies took quiet inventory of the vast array of military and material wealth the Islamist militants had suddenly acquired. The list included three Iraqi military bases, each supplied with U.S.-made weapons and vehicles. It also included bank vaults containing hundreds of millions of dollars in hard currency, as well as factories for making munitions and university laboratories for mixing chemicals used in explosives or as precursors for poison gas.

U.S. officials also were aware that the Islamic State had gained control of small quantities of natural or low-enriched uranium – the remnants of Iraq’s nuclear projects from the time of Saddam Hussein’s presidency – as well as some relatively harmless radioactive iridium used in industrial equipment.

But a far bigger radiological concern was the cobalt. Intelligence agencies knew of the existence in Mosul of at least one powerful radiotherapy machine used for cancer treatment, one that could potentially provide the Islamic State with a potent terrorist weapon.

Outside experts were becoming aware of the threat, as well.

In 2015, the Institute for Science and International Security, a nonprofit organization in Washington that monitors global nuclear threats, began conducting research to answer the basic questions: How many machines were in Mosul? Where were they deployed? And exactly how powerful were they?

The group obtained documents showing that two different medical centers in Mosul had obtained cobalt-60 machines in the 1980s. Other records showed that at least one of the devices was in active use as recently as 2008, and in the following year Iraqi officials had sought replacement parts, including new cobalt-60 cores, for both.

From the records, the institute’s experts could draw broad conclusions about the cobalt inside the machines. In a draft report written in November 2015, research fellow Sarah Burkhard calculated that the radioactive cores, when new, contained about nine grams of pure cobalt-60 with a potency of more than 10,000 curies – a standard measure of radioactivity. A person standing three feet from the unshielded core would receive a fatal dose of radiation in less than three minutes.

The institute quietly shared its findings with U.S. intelligence and military officials in late 2015 but declined to publish its report, fearing that Islamic State occupiers would benefit from the information. The Washington Post became aware of the report last year but agreed to a U.S. government request to delay writing about it until after Mosul’s liberation.

Because cobalt-60 decays over time, the potency of the Mosul machines’ 30-year-old cobalt cores would have been far less than when the equipment was new, but still enough to deliver a lethal dose at close range, the report said.

David Albright, the president of the institute, noted that groups such as the Islamic State have long discussed the possibility of using such material in a dirty bomb, a simple device that uses conventional explosives to spread radioactive debris across densely populated urban terrain. Such a bomb would probably not cause large numbers of casualties, but it can be enormously effective, he said, as a weapon of terrorism.

“The worst case would have been the Islamic State widely dispersing the radioactive cobalt in a city, causing panic and an expensive, disruptive cleanup,” said Albright, a nuclear weapons expert and former U.N. weapons inspector. “There would likely not have been that many deaths, but the panic could have been profound, leading to the emptying of parts of the city as residents fled, fearful of the effects of radiation.”

There was one question that U.S. officials and private researchers could never conclusively answer during the months of Islamic State occupation: Where was the cobalt exactly?

In strife-torn Mosul, there were no publicly available records about the city’s two radiotherapy machines since 2008, when one of them was mentioned in a scholarly article. The last known addresses were a teaching hospital and a cancer-treatment clinic, both on the western side of the city, in neighborhoods that were heavily contested by Islamic State fighters and were among the last to fall to Iraqi liberators.

Finally, recently, Iraqi officials offered an explanation, saying that both machines had been in Mosul throughout the Islamic State’s occupation, but not in the places where the terrorists might have thought to look for them. They had been placed out of commission for several years because of a lack of parts and had been put in storage in a building owned by the University of Mosul, somewhere in the city’s eastern side.

They were still there when health officials from Nineveh province went to look for them after that sector of the city was secure, said Laith Hababa, a physician and head of the provincial health ministry.

The machines are now in secure storage and “weren’t used by Daesh,” Hababa said, using a common Arabic acronym for the Islamic State.

U.S. officials and nuclear experts expressed relief over what, by all accounts, had been a near-miss. Some speculated that the terrorists never learned of the whereabouts of the machines, although that explanation seemed unlikely, given the terrorists’ efficiency in looting university buildings across the city.

Albright said the task of removing the cobalt cores may have been viewed as too difficult or too risky. Or maybe the group’s commanders were just too busy, especially during the later months of the occupation, as government troops closed in.

“Its leaders were preoccupied elsewhere,” Albright said, “and [perhaps] did not learn about the sources in Mosul, or have a chance to think through the opportunities.”

Leaders of the Islamic State and al-Qaida are known to have sought materials for a dirty bomb, a threat that has added urgency to efforts by U.S. agencies and private groups to improve security for machines with heavy concentrations of cobalt-60, or other radioactive elements such as cesium-137, which comes in a powdery form that is even easier to disperse.

The machines are a necessary fixture in many cancer clinics around the world, but in Western countries efforts are underway to replace the most dangerous models with new technology that cannot be easily exploited by terrorists, said Bieniawski, the former Energy Department official. His organization, the Nuclear Threat Initiative, has raised money to try to speed up the transition, but for now, he said, older machines such as the ones in Mosul are commonly found in developing countries where the risk of theft or terrorism is greatest.

“The ones we see overseas are in the highest category – the highest levels of curies – and they are also portable,” he said. “They are exactly the ones we are most worried about.”