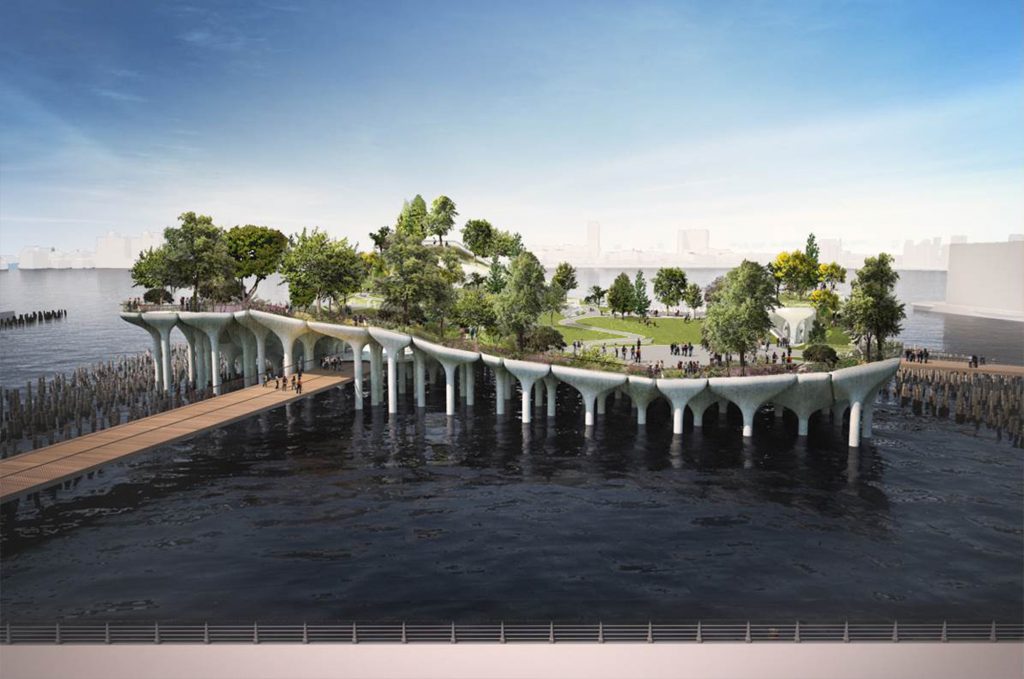 A battle between two New York billionaires has been holding up a plan to replace a crumbling pier on Manhattan’s Hudson River waterfront with an avant-garde park on pilings rising above the riverbed.

Now, that years-long fight could be entering another round — or finally headed to detente.

Proponents and opponents of the $250-million project plan to meet Monday to try and reach a settlement that would avoid more legal action in a conflict that has pitted media mogul Barry Diller and his wife, fashion maven Diane von Furstenberg, against Douglas Durst, the real estate developer and skyscraper baron.

Diller helped hatch the idea for the park and has promised, with his wife, to pay for it through a family charitable foundation. He told the AP that he didn’t plan to attend the meeting but hoped the negotiations would be successful.

Durst, who has funded lawsuits opposing the park, declined to be interviewed. But Richard Emery, a lawyer for the project’s opponents, confirmed the meeting.

“There’s a lot of anxiety that Diller won’t follow through if this is further delayed,” Emery said.

The plan to tear down the old, deteriorating Pier 54 on the Manhattan waterfront and replace it with a new structure, Pier 55, seemed like a fait accompli when it was first announced in 2014.

The design calls for an undulating 2.4-acre (0.97-hectare) landscape of trees and fields rising over a cluster of mushroom-like pillars. It would have three venues for dance, theater and musical performances and would be accessible via two walkways out over the water. The press dubbed it “Diller Island” after Diller and von Furstenberg promised to fund the project.

It would be built on a stretch of Hudson River waterfront that has been transformed over many years from a long-faded port district into a green string of popular recreational piers and esplanades known as the Hudson River Park.

Opposition emerged, though, partly based on environmental concerns about the pier’s impact on aquatic life, and partly rooted in complaints from some over the way in which the project had been planned without broader public input.

“The way they’ve operated is like moving plants around their personal backyard,” said Emery, a civil rights attorney representing the nonprofit City Club of New York, a civic group fueling the contrarian position.

Three lawsuits were filed challenging the project. Durst recently acknowledged that he had quietly funded the lawsuits — two unsuccessful ones in state courts, and a third that resulted in a federal court revoking the project’s permit this past March.

Durst had once been deeply involved in supporting Hudson River Park, but had a falling out with other leaders and gave up the chairmanship of the support group Friends of Hudson River Park Group.

He rarely gives interviews on the subject of Pier 55, but told The Villager earlier this year that he had tried to keep his involvement in funding the opposition lawsuits quiet because “I did not want this to be a personal battle between me and Barry Diller.”

Both men are noted philanthropists. Diller, who formerly ran Paramount Pictures and Fox Inc., gave tens of millions of dollars with his wife to another innovative, elevated city park, the High Line. Durst is a conservationist and a proponent of green buildings and organic farming.

New York Mayor Bill de Blasio phoned Durst earlier this month and encouraged him to drop his opposition to the Pier 55 project.

The federal government issued a new environmental permit in June that will allow work to proceed in mid-August as long as it isn’t halted by a new court battle, said Hudson River Park Trust CEO Madelyn Wils. The target completion date is sometime in 2020, she said.

If a settlement that’s satisfactory to both sides is not reached after Monday’s meeting, Emery told the AP that another lawsuit would be filed challenging the latest permit.

Diller, who can see the old pier from his offices at InterActiveCorp, said he’d love to see the project become a reality.

“What was in my mind was to build something for the people of New York and for anyone who visits New York — a space that on first sight was dazzling, and upon use made people happy.”