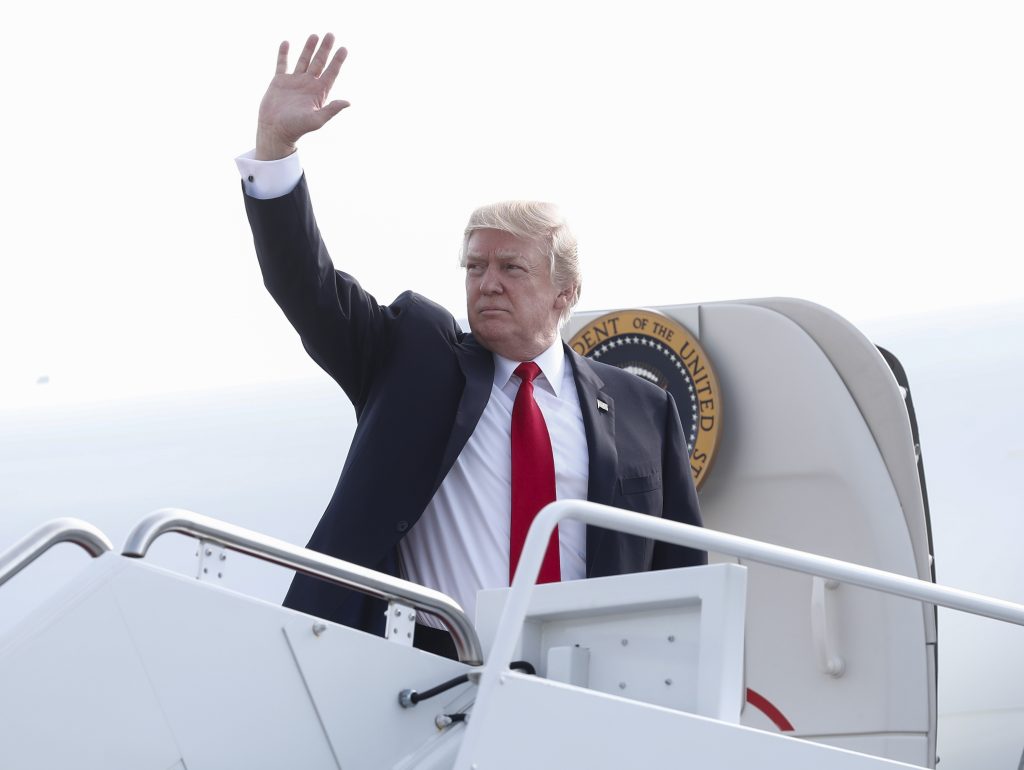 Hours before he was to help commission a new aircraft carrier at a patriotic ceremony on the Virginia coast, President Donald Trump fired off a volley of early morning tweets that again showed how furious he remains over multiple investigations into Russian meddling in the 2016 presidential election.

The tweets were unusual in their breadth and scope, even for Trump, given the wide variety of topics he touched on as Saturday dawned. His 10 tweets, all sent within two hours starting before 6:30 a.m., ranged from the Russia investigation and Attorney General Jeff Sessions to Hillary Clinton, the health-care effort and his newly appointed White House communications director.

Trump said in one missive: “While all agree the U. S. President has the complete power to pardon, why think of that when only crime so far is LEAKS against us. FAKE NEWS.”

The Washington Post recently reported that President Trump has inquired about the authority he has as president to pardon aides, relatives or even himself in connection with the widening investigation into Russian interference in the election and whether any Trump associates were involved.

The president has long criticized leaks of information about the investigation and has urged authorities to prosecute leakers.

Trump maintains that no crimes have been committed.

One of Trump’s attorneys, Jay Sekulow, said the president has not discussed the issue of pardons with his outside legal team.

President Trump defended his son, saying he “openly gave his e-mails to the media & authorities whereas Crooked Hillary Clinton deleted (& acid washed) her 33,000 e-mails!” Trump’s namesake has become a focus of the investigation after it was revealed that he, Kushner and Manafort met with Russian representatives at Trump Tower in June 2016. Trump Jr. later released email exchanges concerning the meeting on Twitter, after learning that The New York Times was about to publish them.

The FBI investigated Clinton for using a private email server as secretary of state. She turned thousands of emails over to the government, but deleted thousands of others that she said were personal or unrelated to her work as the nation’s top diplomat.

Trump also complained Saturday about a Washington Post report that the Russian ambassador to the U.S. said he discussed election-related issues with Jeff Sessions when the men met during the 2016 presidential race. Sessions, now the attorney general, at the time was a U.S. senator and foreign policy adviser to Trump.

Trump tweeted: “A new INTELLIGENCE LEAK from the Amazon Washington Post, this time against A.G. Jeff Sessions. These illegal leaks, like Comey’s, must stop!”

The Post on Friday cited anonymous U.S. officials who described U.S. intelligence intercepts of Ambassador Sergey Kislyak’s descriptions of his meetings with Sessions.

The Justice Department said Sessions stands by his previous assertion that he never had conversations with Russian officials about any type of interference with the election.

President Trump also said that “Republican Senators must step up to the plate and, after seven years, vote to Repeal and Replace” the Obama-era health-care law. An effort to advance legislation collapsed in the Senate earlier this week after several Republicans said they wouldn’t vote for the bill.

Trump ended the tweet with “Tax Reform and Infrastructure. WIN!”