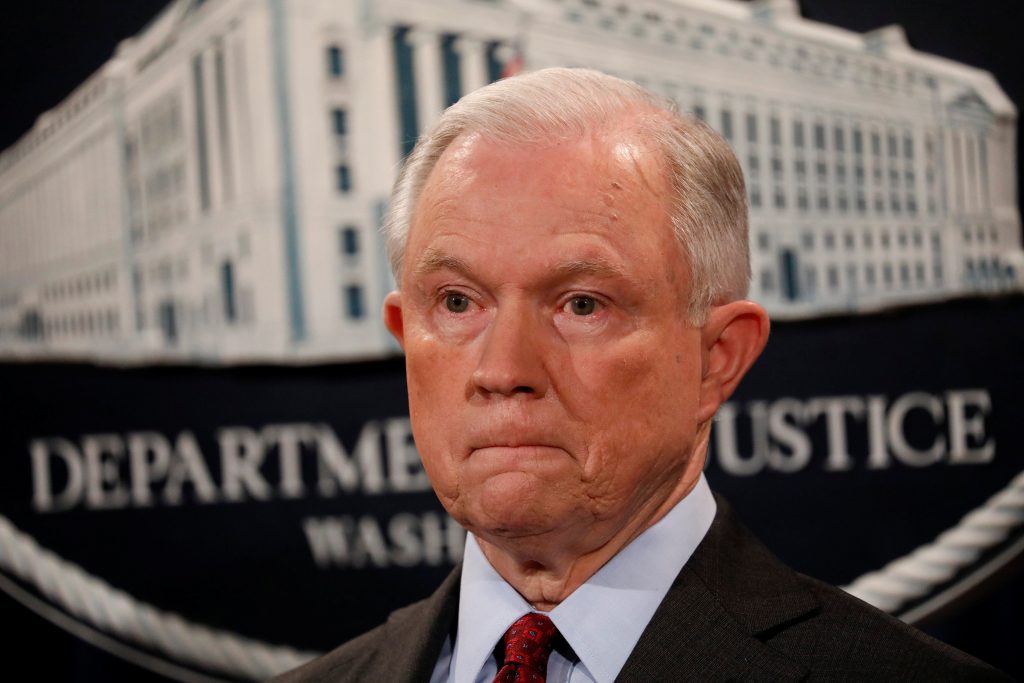 Attorney General Jeff Sessions said Thursday he has no immediate plans to resign after President Donald Trump excoriated the nation’s top prosecutor for recusing himself from the probe of suspected Russian meddling in the 2016 U.S. political campaign.

“We love this job, we love this department and I plan to continue to do so as long as that is appropriate,” Sessions said.

A former senator from Alabama, Sessions was one of Mr.Trump’s earliest and ardent supporters and became attorney general in February. A month later, he took himself out of a Justice Department-led inquiry into the election following revelations he’d failed to disclose his own meetings with the Russian ambassador to the U.S.

At a news conference Thursday on an unrelated matter, Sessions was asked how he could continue to serve as attorney general without the confidence of the president. His response: “We’re serving right now. The work we’re doing today is the kind of work we intend to continue.”

But in a sign of his challenges, Sessions was unable to focus public attention on the case he wanted to talk about — an international takedown of a hidden internet marketplace that officials said was 10 times larger than the Silk Road bazaar. The news conference on that case was ended once it was clear that reporters had no questions on the investigation.

President Trump on Wednesday told The New York Times he never would have tapped Sessions for the job had he known a recusal was coming.

“Jeff Sessions takes the job, gets into the job, recuses himself, which frankly I think is very unfair to the president,” Trump told the newspaper. “How do you take a job and then recuse yourself? If he would have recused himself before the job, I would have said, ‘Thanks, Jeff, but I’m not going to take you.’ It’s extremely unfair — and that’s a mild word — to the president.”

Trump’s blistering rebuke underscored his continuing fury with Sessions more than four months after the recusal and came during an interview in which he also lashed out at Robert Mueller, the special counsel now leading the federal probe; James Comey, the FBI director Trump fired; Andrew McCabe, the acting FBI director who replaced Comey; and Deputy Attorney General Rod Rosenstein, who appointed the special counsel.

Trump’s denouncement reflected a long-simmering frustration with one of his staunchest allies, but was not a calculated attempt to force Sessions from the Cabinet, according to two Trump advisers. For weeks, the president has seethed about Sessions’ decision to recuse himself from the federal investigation into whether Trump’s campaign coordinated with Russia during last year’s election.

The White House notably made no effort to walk back Trump’s comments in the interview or display confidence in the attorney general. Instead, the two Trump advisers acknowledged that the president’s public comments largely reflected what they have heard him say about Sessions privately.

The advisers spoke on condition of anonymity because they were not authorized to publicly discuss the president’s thinking. The Justice Department declined to comment on the president’s remarks.

Sessions, one of Trump’s earliest supporters, stepped away from the Russia probe following revelations that he had failed to disclose meetings with the Kremlin’s ambassador to the U.S. His decision was made without consulting with the president and essentially paved the way for the appointment of Mueller as special counsel. Mueller’s investigation, along with separate congressional probes, has overshadowed much of Trump’s agenda and ensnared several of his associates, including son Donald Trump Jr. and his son-in-law and senior adviser Jared Kushner.

Despite his protest to the contrary, Trump continues to heavily watch cable news coverage of the Russia investigations. At times he has told allies he’s convinced that the White House has turned the corner and the controversy will soon be behind him. But at other points, he has expressed fears that it will dog him for his entire time in office.

Few developments in the snowballing controversy have irked Trump more than Sessions’ decision to recuse himself from the investigations. The advisers said the president viewed the move as an act of disloyalty — arguably the most grievous offense in the president’s mind — and was angry that Sessions did not consult with him ahead of time.

At one point, Sessions privately told Trump he was willing to resign his post, but the president did not accept the offer. One adviser said the president’s comments to the Times did not reflect any new desire by Trump to fire Sessions, though they acknowledged that the attorney general’s response to the public denigration was less certain.

Sessions was the first U.S. senator to endorse Trump during the presidential campaign, and the two bonded over their hardline immigration views. Some of Sessions’ long-serving advisers are now working alongside the president in the West Wing, including senior policy adviser Stephen Miller, who was one of the architects of Trump’s controversial travel ban.

A potential Sessions resignation could throw Mueller’s investigation into a state of uncertainty. Trump would nominate a replacement and could seek assurances that his pick would not recuse himself from the investigations.

Trump raised the prospect of firing Mueller in his interview with the Times, suggesting he had damaging information on the former FBI director. The president said Mueller’s selection for the job was a conflict of interest because Trump had spoken with him about returning to the FBI after the firing of James Comey in May.

“There were many other conflicts that I haven’t said, but I will at some point,” Trump said.

He lobbed similar conflict of interest charges at acting FBI Director Andrew McCabe and Deputy Attorney General Rod Rosenstein. He also accused Comey of briefing him on a dossier of unverified, incriminating information in an effort to gain leverage over the soon-to-be president.

The president has repeatedly told those close to him that he fears there is a movement underway, fueled in part by Comey, Rosenstein and potentially Mueller, to discredit his presidency. He has denied that his campaign had any contacts with Russia during the election, though that assertion has been challenged by his son’s acknowledgment that he accepted a meeting that was billed as part of the Russian government’s efforts to help the Republican win the election.