MTA Mulling a Possible Ban on Eating in the Subway 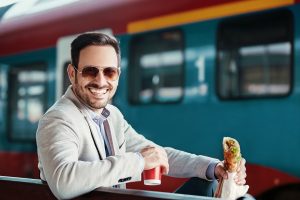 New York transit officials are chewing on the notion of a subway snacking ban — and that’s heating up the political rhetoric.

The Metropolitan Transportation Authority is weighing food restrictions, or even a ban, after a trash fire on the tracks crippled subway service on Monday.

“From 1979 to 1999, I did not own a car and almost exclusively got around by subway. It would have been in those years inconceivable not to be able to eat on the subway,” the Democratic mayor said. “I don’t think it’s fair to people to say you can’t eat on the subway.”

“I’m in charge with trying to find ways to make the subway system more efficient, faster, cleaner and more responsive. You would think the mayor would be supportive in those efforts,” said Lhota, who was appointed by Gov. Andrew Cuomo earlier this month to head the nation’s largest transit system.

“It’s nice to hear from the mayor, but it doesn’t help to be so incendiary in his advice … everyone has a right to be on a clean subway,” said Lhota, adding that moveable feasts “feed the rats.”

When pressed for details of a potential ban, Lhota said, “No decisions have been made.”