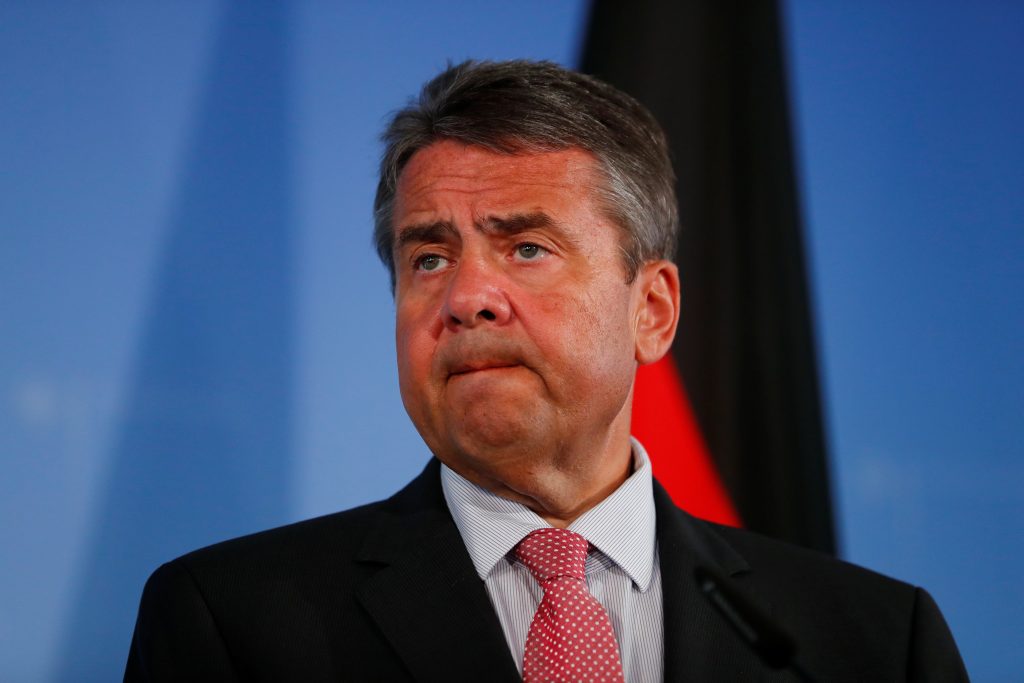 The German government on Thursday increased pressure on Turkey after the jailing of a human rights activist, telling all citizens traveling there to exercise caution and threatening to withhold backing for German investments in Turkey.

Foreign Minister Sigmar Gabriel said Berlin had shown patience amid rising tensions with Turkey, but “time and again we have been disappointed.” While Germany stopped short of more drastic immediate action, his statement marked a shift to a more hawkish public stance.

Turkish President Recep Tayyip Erdogan’s spokesman called Gabriel’s comments “unfortunate,” and the Foreign Ministry accused Berlin of “blackmail and threats,” saying that it would not make concessions regarding Turkey’s judiciary. Ankara rejects complaints about the jailing of German Peter Steudtner and five other activists accused of links to terror groups.

German-Turkish relations have been souring for over a year, particularly since last July’s coup attempt in Turkey. Twenty-two German citizens have been taken into custody in the ensuing crackdown. Nine are currently in jail, including Steudtner and journalists Deniz Yucel and Mesale Tolu.

The countries also have tangled over Turkey blocking German lawmakers’ visits to German troops serving in the campaign against the Islamic State group at two Turkish air bases and over authorities’ refusal to allow rallies by Turkish government politicians in Germany. The latter spat prompted Erdogan to accuse Germany of “committing Nazi practices.”

The immediate trigger of Germany’s ire was a Turkish court’s decision on Tuesday to jail Steudtner and the other activists, including Amnesty International’s Turkey director and a Swedish IT trainer, who were detained in a July 5 police raid on a hotel on the island of Buyukada, where they were attending a digital security workshop.

Amnesty says Steudtner was providing training on non-violence and wellbeing. It’s unclear which terror group the six are accused of aiding.

Berlin was alarmed because Steudtner has no previous links to Turkey and yet was still accused of links to terror, which Germany says are far-fetched. Gabriel said the case “shows that German citizens are no longer safe from arbitrary arrests.”

“The cases of Peter Steudtner, Deniz Yucel and Ms. Tolu are examples of the absurd accusations of terror propaganda that obviously are only meant to serve to silence every critical voice in Turkey … and also voices from Germany,” Gabriel said. He also complained that German companies are being accused without evidence of helping terrorists.

“We must be clearer than before so that authorities in Ankara understand that such policies are not without consequences,” Gabriel told reporters after interrupting his vacation for consultations with Chancellor Angela Merkel and other leaders.

The Foreign Ministry issued travel advice which, while short of a formal warning, stated that “people traveling for private or business reasons to Turkey are advised to exercise elevated caution” and to register with the German embassy or consulate even for short stays.

Gabriel also cast doubt on the future of government export guarantees for German companies’ investments in Turkey in light of the threat of “arbitrary expropriations for political reasons.” The government offers such guarantees to insure exports to many countries, but Gabriel said that “you cannot advise anyone to invest in a country if there is no longer legal security.”

He added that Berlin will discuss with its European Union partners the future of financial aid for Ankara allocated to help prepare Turkey to join the bloc, even as talks on its possible membership have stalled. And he said that credits from European development banks should be examined.

The German government will consider those questions and “further measures” over the coming weeks, Gabriel said.

Turkish President Recep Tayyip Erdogan has repeatedly said the rights activists now arrested were involved in a meeting that had the “nature of a continuation” of the coup attempt.

Erdogan’s spokesman argued that Gabriel’s comments were geared toward a domestic audience ahead of Germany’s Sept. 24 election. Merkel’s and Gabriel’s parties are rivals in that vote, but both have made clear that the new stance toward Turkey was coordinated.

“We strongly condemn statements that German citizens who travel to Turkey are not safe and that German companies in Turkey have hesitations and concerns,” Ibrahim Kalin said. “There is no such thing.”

Kalin also urged Germany to respect decisions by the Turkish judiciary, saying the human rights defenders weren’t ordinary visitors but “as far as the judiciary could establish, people who engaged in illegal or suspicious activities.”

In its statement, Turkey’s Foreign Ministry said that the two countries were going through a crisis of confidence, blaming it on what it said was Germany’s “double-standard attitude” toward Turkey.

Over the past year, more than 50,000 people have been arrested and 110,000 dismissed from their jobs for alleged links to U.S.–based cleric Fethullah Gulen — on whom Ankara blames the coup attempt — and other terror groups.