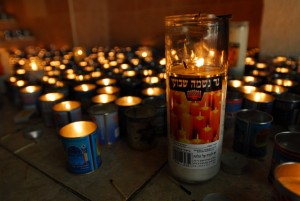 Mrs. Sabina (Shaindel Feitcheh) Weinreb, a”h, was niftar last Thursday morning at the age of 89. Mrs. Weinreb was the beloved matriarch of a large family, k”ah, of b’nei Torah, baalei chessed and baalei tzedakah, devoted to Hashem and His People.

Sabina was born on June 6, 1928, to Reb Moshe and Mrs. Rivka Volkon, devoted Belzer Chassidim, in the Polish town of Oshpitzin, known as Osweicim in Polish, and later as the infamous home of the Nazi death camp, Auschwitz. She was youngest of four children.

When World War II broke out, the family escaped to Russia, but were deported to Siberia after refusing to accept Russian citizenship, which would have meant that they would be stuck behind the Iron Curtain.

Sabina, her mother, father and two sisters survived. Her brother was niftar during the War.

In 1951, Sabina married Leibish Weinreb, also a Polish refugee, the son of Reb Wolf and Sarah Weinreb. The Weinrebs were from Lemberg (Lvov), Chassidim of the Lemberger-Boyaner Rebbe.

Leibish and Sabina had two children in France — a daughter Keetcha (Miriam Golda) and a son Yati (Yaakov). In 1954, the family went to New York; a third daughter, Isa (Baila), was born soon thereafter.

Shortly after their arrival in America, the Weinrebs settled in the Upper West Side of Manhattan, where they would become pillars of the community.

Reb Leibish and Sabina were close with the Boyaner Rebbe in America, Harav Mordechai Shlomo Friedman, zy”a, and were generous supporters of his yeshivah in Yerushalayim, among many other organizations.

As the Weinreb family flourished, ka”h, Mrs. Sabina Weinreb was able to enjoy the fruits of her years of devotion, taking pride in the growth and accomplishments of her descendants.

Last Wednesday, Mrs. Weinreb wasn’t feeling well and was taken to the hospital, where she was niftar Thursday morning, 26 Tammuz. Her petirah was shocking, but she had the great brachah of enjoying good health until literally the last day of her life.

Mrs. Sabina Weinreb was buried on Erev Shabbos, next to her beloved husband, on Har Hamenuchos.

She is survived by her three children: Keetcha (Miriam Golda) Reiss, Yati (Yaakov) Weinreb, and Isa (Baila) Wassner, as well as many grandchildren, great-grandchildren and great-great-grandchildren, all of whom follow in her path of Torah and gemillas chassadim and who will surely bring her much nachas in Gan Eden.

A full tribute will, iy’H, appear in a future edition.