Israel PM Netanyahu: For Its Own Good, Europe Should Side With Israel, Not Palestinians
Israel 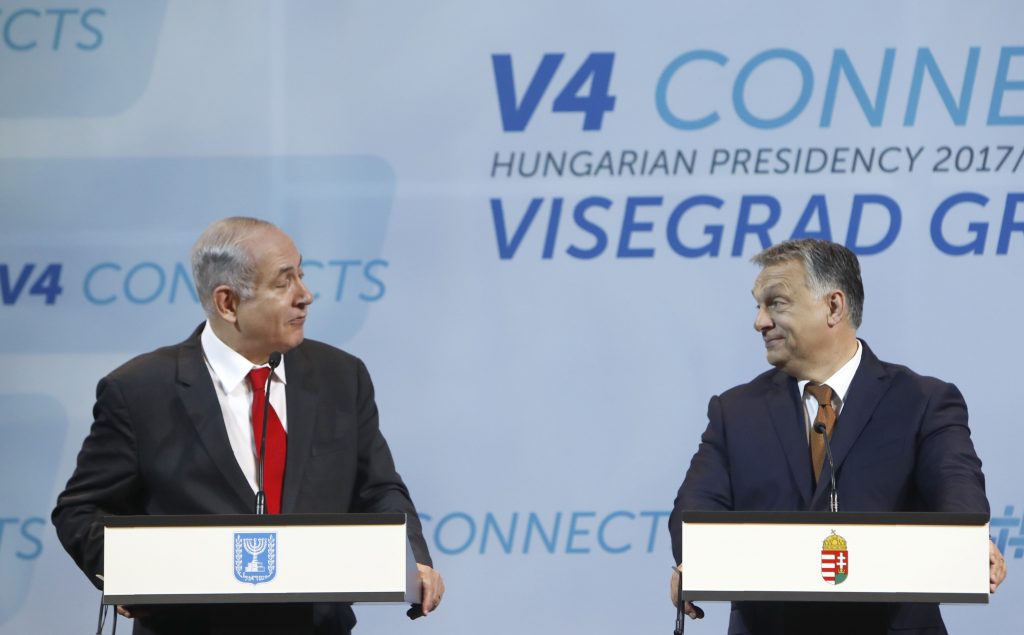 In an off-the-record conversation that was leaked between Prime Minister Binyamin Netanyahu and leaders of the Visegrad Group, the Israeli prime minister urged Europe to take Israel’s side in its ongoing dispute with the Palestinians – for its own good. “Europe has to decide if it wants to live and thrive or if it wants to shrivel and disappear,” Netanyahu said in comments that were inadvertently piped into another room, where reporters were gathered. “The European Union is the only association of countries in the world that conditions the relations with Israel, which produces technology in every area, on political conditions,” Netanyahu said of the EU, calling the policy “crazy.”

PM Netanyahu also made a rare public admission that Israel has struck Iranian arms convoys in Syria bound for Hezbollah “dozens and dozens of times.”

PM Netanyahu was meeting with the four leaders of the four Central European states that make up the Group – the Czech Republic, Hungary, Poland and Slovakia – at the tail end of a summit he had been attending. During the summit, Netanyahu met individually with leaders of each of the four countries.

On Tuesday, Hungarian Prime Minister Viktor Orban apologized for his country’s role in the Holocaust, saying that he regretted Hungary’s allying with Nazi Germany during the Second World War.” Previous governments of Hungary sinned during the Second World War when they did not protect the Jews, and we chose to cooperate with the Nazis instead of guarding the Jews,” Orban said, adding that he had “made it clear that my government will defend the Jews of the country and that I have zero tolerance for anti-Semitism.”

At Wednesday’s meeting, Netanyahu addressed Israel’s overall relationship with Europe, saying that it was in the EU’s interest to build a relationship with Israel. China, for example, was a country of over a billion people that Netanyahu said had developed a “special relationship” with Israel, and that “they don’t care about the political issues.” The reason for that, he said, was Israel’s prowess in technology. That was one reason that Indian Prime Minister Narendra Modi didn’t bother to visit Ramallah on his recent trip to Israel; he realized, Netanyahu said, that the help his country needs is in Israel, not the Palestinian Authority.

“Don’t undermine the one Western country that defends European values and European interests and prevents another mass migration to Europe,” Netanyahu added, describing how Israel was defending Western values in a very difficult region of the world. “Start supporting European economies by doing what the Americans, the Chinese and the Indians are doing,” by taking advantage of what Israel had to offer Europe technologically. “The EU is undermining its security by undermining Israel. Europe is undermining its progress by undermining its connection with Israeli innovation,” he added.