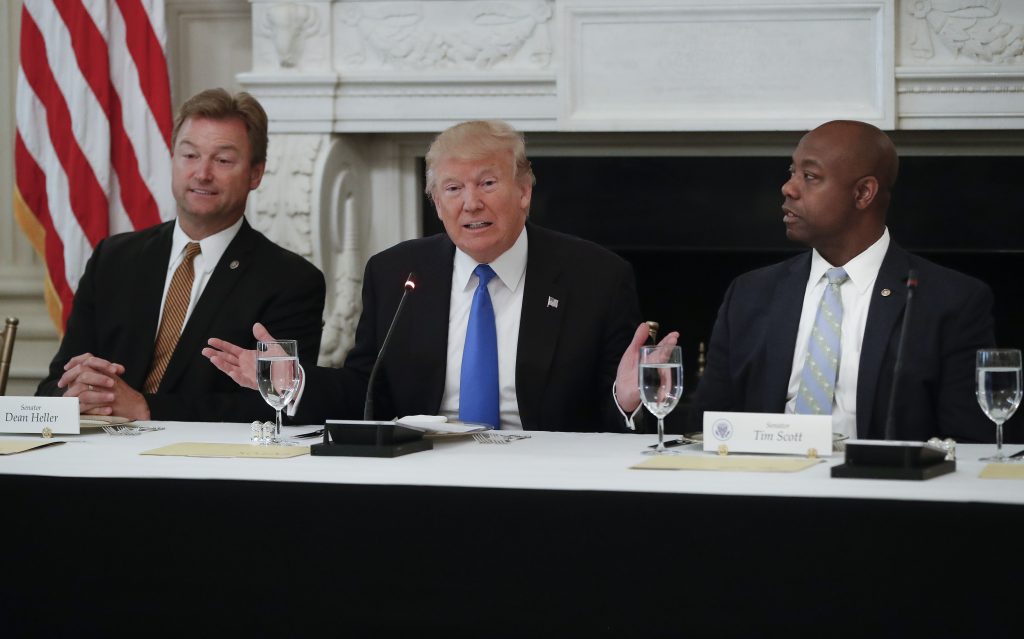 Lecturing fellow Republicans, President Donald Trump summoned GOP senators to the White House on Wednesday and told them face-to-face that they must not leave town for their August recess without sending him an “Obamacare” repeal bill to sign.

“I’m ready to act,” President Trump said, putting the responsibility on Republican senators, not himself. During last year’s presidential campaign, he had declared repeatedly that it would be “so easy” to get rid of the Obama law.

Mr. Trump’s comments Wednesday came just a day after the latest GOP health care plan collapsed in the Senate, leading Trump himself to say it was time to simply let President Barack Obama’s health care law fail. Majority Leader Mitch McConnell had indicated he was prepared to stick a fork in the Republican bill and move on to other issues including overhauling the tax code.

But in an apparent change of heart, in keeping with his engagement on the issue, Mr. Trump pressured McConnell to delay the key vote until next week, and he invited Republican senators to the White House for lunch.

There, with the cameras rolling in the State Dining Room, Trump spoke at length as he cajoled, scolded and issued veiled threats to his fellow Republicans, all aimed at wringing a health care bill out of a divided caucus that’s been unable to produce one so far.

“For seven years you promised the American people that you would repeal Obamacare. People are hurting. Inaction is not an option, and frankly I don’t think we should leave town unless we have a health insurance plan,” he said.

Seated next to Nevada Sen. Dean Heller, who is vulnerable in next year’s midterm elections, Trump remarked, “He wants to remain a senator, doesn’t he?” as Heller gave a strained grin.

Still, it seems improbable that the White House lunch will change the calculus in the Senate, where McConnell has failed repeatedly to come up with a bill that can satisfy both conservatives and moderates in his party. Two different versions of repeal-and-replace legislation fell short of votes before coming to the floor, pushing McConnell to announce Monday night that he would retreat to a repeal-only bill that had passed Congress when Obama was in office.

Yet almost as soon as that plan was unveiled, it was killed off, too, as three GOP senators — one more than McConnell can afford to lose in the narrowly divided Senate — announced opposition.

Complicating matters further, in his comments at the White House lunch, Trump was back to supporting repeal and replace legislation, not just repeal.

Notwithstanding the mixed messages, what was clear Wednesday was that after promising for seven years to repeal and replace “Obamacare” — and using the issue to obtain majorities in Congress and the White House — many Republican senators are reluctant to abandon the effort, even as some acknowledge it would take a dramatic intervention to change the outcome.

“Know anybody who can work miracles?” said GOP Sen. Pat Roberts of Kansas ahead of the White House lunch.

As Chuck Grassley of Iowa got on board, the bus that would ferry senators to the Trump lunch, he tweeted, “I’m eager to replace Obamacare, and I’m the first one on the bus to the Whitehouse to find the magic to get to ‘yes.'”

The three senators who are publicly opposed to moving forward on the repeal-only bill are Sens. Susan Collins of Maine, Lisa Murkowski of Alaska and Shelley Moore Capito of West Virginia.

Asked before the lunch if there was anything the president could say to change her mind, Capito said, “I think he just needs to see where the differences are — again.”

Many Republicans support the repeal-only approach that McConnell plans to try to bring up for a vote next week, and they questioned how senators who voted for that idea two years ago could oppose it now.

But for others, the implications are too severe now that the bill could actually become law with a Republican president in the White House ready to sign it. The Congressional Budget Office has estimated that more than 30 million people would lose insurance over a decade under the legislation.

Murkowski told reporters that repealing the Affordable Care Act without the promise of a replacement would cause uncertainty and chaos. She suggested a better approach might be to go back to the committee room and work on a bipartisan basis “in a way that the public feels that we are really working toward their best interests.”