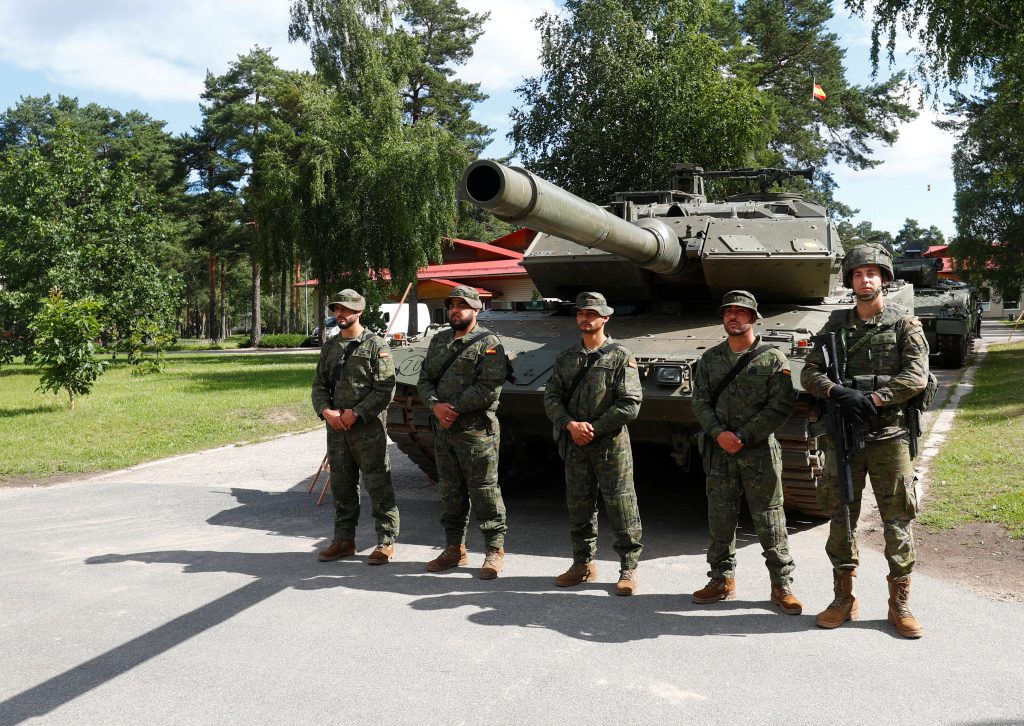 Tens of thousands of troops are on the move from the Baltic to the Black Sea, as NATO and Russia open up a series of massive military exercises the size of which the continent hasn’t seen since the Cold War.

Both sides claim the drills, which involve aircraft, warships, tanks and artillery, are purely defensive in nature. But it is clear the exercises are also meant to show off new capabilities and technologies, and display not only the strength of alliances, but how swiftly troops and heavy equipment can move to squash a threat at the frontier.

The most ambitious undertaking on the NATO side is Saber Guardian 17, a series of over a dozen distinct battle drills being carried out by 25,000 troops from 20 countries moving across Hungary, Romania and Bulgaria.

The scenario presented to ground commanders is that a technologically advanced land force has pushed into NATO territory and is threatening the alliance as a whole. The drills include air defense tests, live fire tank engagements, long advances by armored columns, fighter planes and helicopters supporting ground movements, electronic warfare, and airdrops.

“Deterrence is about capability, it’s about making sure that any potential adversary knows that we are prepared to do whatever is necessary,” U.S. Army Europe commander Lt. Gen. Ben Hodges told reporters during the exercise. “What escalates tensions is when we look weak, not connected, not prepared; that is what invites aggression.”

The general’s blunt comments underscore the planning for Saber Guardian, which doesn’t name Russia as the adversary, but clearly has the Kremlin in mind.

The scenario revolves around an incursion into NATO territory by a militarily advanced enemy intent on seizing the economic assets of Black Sea countries. A battle featuring 5,000 NATO troops at the Cincu training range in Romania saw U.S. Apache and Romanian helicopters coordinate with artillery on the ground, U.S. Abrams tanks, and 650 vehicles in support of a large infantry movement to halt the advance.

The U.S. is planning to spend about $23 million on the sprawling Romanian base in order to conduct even larger, more complex battle drills there in the future.

On the other side of the deterrent fence stands Russia, which is preparing to surge as many as 100,000 troops into the field in a series of drills dubbed Zapad, or “West” in the coming weeks.

The Kremlin claims about 12,700 troops will be active in Belarus and Russia for Zapad. But experts and NATO officials say Moscow is more likely to conduct a series of engagements that will swell those ranks by tens of thousands. Under the Vienna Document agreement of 2011, foreign observers must be present for any exercise that exceeds 13,000 troops.

By coming in under that number while conducting several other large drills at the same time, Moscow can avoid the presence of observers and control the narrative of how its troops performed.

But NATO is wary.

Given that Russia used a massive military exercise in 2014 to obscure its incursion into Crimea, and invaded South Ossetia in Georgia in 2008 during another exercise that covered troop movements, the alliance is keeping a close eye on Zapad.

“From previous experiences related to previous exercises, we have every reason to believe there may be substantially more troops participating than the official quoted numbers,” NATO Secretary General Jens Stoltenberg said recently when asked about Zapad.

“We don’t consider this year’s Zapad exercise in itself to be a direct threat to [NATO] or a cover for an attack,” added Kristjan Prikk, undersecretary for defense policy at Estonia’s Ministry of Defense during a conference in Washington on July 11. “But we have to keep in mind that the Russians have the nasty habit of hiding their actual military endeavors behind exercises.”

The last Zapad, in 2014, focused on displaying how quickly Russia could move forces from one part of the country to another, and illustrated how the Kremlin underplays the number of troops involved in its intertwined military drills.

Moscow claimed about 22,000 troops took part in 2014, but outside observers later concluded that up to 70,000 were involved, once all of the smaller but related exercises were added up.

Whatever number of troops ultimately take part, Moscow is “going to very actively signal what they can and cannot do militarily,” said Olga Oliker of the Center for Strategic and International Studies. And the fact that Russia often conducts nuclear exercises in conjunction with conventional movements adds an extra element of uncertainty for NATO and the West.

This year, “I’m looking to see what Kaliningrad’s role is in the exercise, and what supporting and concurrent exercises are being held in Belarus and Kaliningrad,” the Russian exclave on the Baltic Sea, Oliker said.

Three Chinese warships are slated to arrive in Kaliningrad in July 21 to take part in a series of drills with the Russian navy and air force.

The upcoming week’s worth of activities will include anti-submarine and anti-ship operations, and practice between the two nations communicating and coordinating while fighting. “The main aims of the exercise are to increase the efficiency in cooperation of the two fleets to counter threats to security at sea, [and] train compatibility of the crews of Russian and Chinese combat ships,” the Russian Defense Ministry said.

The naval activity in the Baltic comes months after NATO established new brigades in Estonia, Lithuania and Latvia, beefed up by prepositioned American tanks and heavy armored vehicles.

In June, the U.S. Air Force also sent B-1 and B-52 bombers to Europe to participate in the massive BALTOPs exercise with Baltic allies, which included 50 allied ships running through a series of defensive maneuvers to protect NATO’s northern flanks.

Earlier this month, the U.S. Army deployed a Patriot anti-aircraft missile system in Lithuania for use in yet another NATO wargame, marking the first time the system has been brought to the Baltic region where Russia enjoys a robust air and missile defense capability. The deployment is temporary, U.S. officials cautioned, but officials in Lithuania are looking at purchasing the system. Romania recently committed to a $3.9 billion deal for seven Patriot missile defense systems in July.

Closer to Russia’s borders and Crimea is another NATO exercise related to Saber Guardian, dubbed Sea Breeze 2017. The 12-day naval exercise currently underway in the Black Sea is co-hosted by the U.S. and Ukraine, and features the U.S. Navy cruiser USS Hue City and the destroyer USS Carney, which join 16 other countries in the Odessa-based undertaking. American surveillance plans and a team of Navy SEALs are also participating.

The naval exercises will be closely watched by Russian forces, who are active in the Black Sea, and have vastly improved their surveillance capabilities in Crimea. Over the past year, Russian aircraft have repeatedly buzzed American warships and aircraft in international waters in the Black Sea, drawing protests from Washington.

In February, an armed Russian aircraft buzzed the USS Porter, and in May, armed Russian jets came within feet of U.S. surveillance planes operating over the waterway.