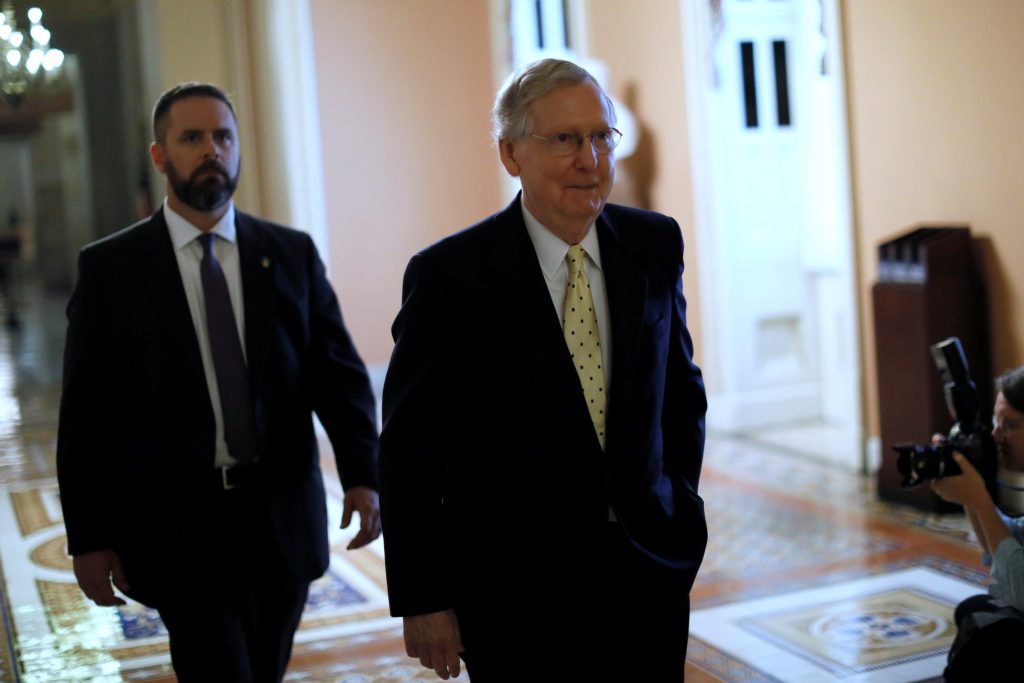 Senate Republican leader Mitch McConnell set a vote on a straight repeal of Obamacare after efforts to overhaul the law collapsed, but the new approach began to unravel within hours on Tuesday as two Republicans announced their opposition and others voiced doubts.

The disarray in the Senate rattled financial markets and cast doubt on the chances for getting President Donald Trump’s other domestic policy priorities such as tax reform through a divided Congress.

McConnell gave up on efforts to overhaul the 2010 Affordable Care Act, known as Obamacare, late on Monday after it became clear he did not have the votes. Instead, he announced plans to vote in coming days on a two-year transition to simply repeal Obamacare with no replacement.

“We will now try a different way to bring the American people relief from Obamacare,” McConnell said on Tuesday as he opened the Senate, where the Republicans hold a razor-thin 52-48 majority. “I think we owe them at least that much.”

But Republican Senators Shelley Moore Capito of West Virginia and Susan Collins of Maine quickly announced they would not back repeal, and Rob Portman of Ohio told reporters he had concerns about the approach.

With Democrats united in opposition, Republicans can only afford to lose two votes to pass the measure in the Senate.

“I do not think that it’s going to be constructive to repeal a law that at this point is so interwoven within our healthcare system and then hope that over the next two years we will come up with some kind of replacement,” Collins told reporters.

Repealing and replacing Obamacare has been a top Republican goal for seven years, and Trump made the promise a centerpiece of his White House campaign.

The overhaul’s failure left Trump with no major legislative achievements after six months in office and calls into question not only his ability to get his agenda through Congress but the Republican Party’s capacity to govern effectively.

As the bill collapsed in the Senate, leaders in the Republican-controlled House of Representatives unveiled a budget plan putting a proposed tax code overhaul on the same partisan procedural path that led to the anti-Obamacare initiative’s chaotic downfall late on Monday.

Mr. Trump urged an outright repeal, even as other Republicans sought a shift toward bipartisanship with Democrats. The setback sent the U.S. dollar to a 10-month low against a basket of major currencies as investors worried about the impact on other administration reform efforts.

The S&P and the Dow were lower in late morning trading, weighed down by tepid earnings from big banks and the health-care setback.

“The health-care bill not coming through raises some continued concerns about the ability of Washington to push through favorable fiscal policies,” said Lisa Kopp, head of traditional investments at U.S. Bank Wealth Management.

In an early morning Twitter message, Trump said, “We were let down by all of the Democrats and a few Republicans. Most Republicans were loyal, terrific & worked really hard. We will return!”

Vice President Mike Pence said that President Trump supports the move to vote on a straight repeal of Obamacare.

Obamacare boosted the number of Americans with health insurance through mandates on individuals and employers, and income-based subsidies. About 20 million Americans gained insurance coverage through the law.

Shelving the current bill means that insurers once again face uncertainty about whether the administration will cut off funding for the subsidies used to make Obamacare individual plans affordable, putting 2018 coverage and long-term planning at risk.

For hospitals, the move relieves the near-term pressure of massive Medicaid reform, but the long-term plan for federal spending for states’ Medicaid expansion is now murky.

The American Medical Association, which represents doctors, called on Congress to start a bipartisan effort and to stabilize the individual health insurance marketplace.

Brian Gardner, policy analyst at financial firm Keefe Bruyette & Woods, said in a research note on Tuesday that McConnell “has reached the end-game on the healthcare debate” and would not have more success with a simple repeal.

“We expect that vote will similarly fail,” Gardner said.

“The door to bipartisanship is open right now, not with repeal, but with an effort to improve the existing system,” he said on the Senate floor.

Republicans had hoped to finish with health care before an upcoming August recess so they could tackle a wide-ranging rewrite of the U.S. tax code in September. Separate talks on taxes appear unlikely to reach Trump’s pledged 15-percent corporate rate.

But their failure exposed the sharp divide within their own ranks between moderates concerned about Medicaid cuts and conservatives who back them and want even more dramatic changes.

A similar version of the Senate bill passed the House in May, but legislation must pass both chambers for Trump to sign into law.