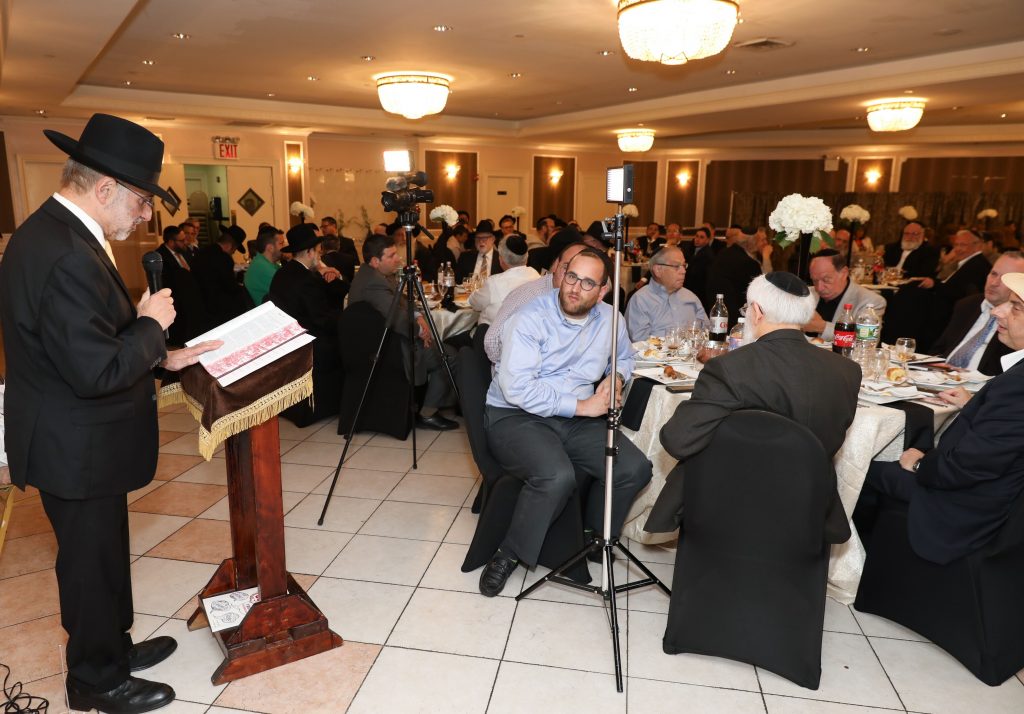 A special celebration was held in Midwood Monday night, as Beryl Phillips, an accountant and attorney who began learning Daf Yomi in middle of the last cycle, completed Maseches Bava Basra, finishing Shas for the first time.

Mr. Phillips grew up in East New York and attended a number of day schools and yeshivos in New York and Israel. He lived for 27 years in West Hempstead before his wife was tragically niftar. He remarried in 2004, and three years later, he and his wife Pearl moved to Flatbush. Soon thereafter, they joined Khal Zichron Mordechai, under the leadership of Harav Shimshon Sherer.

In 2010, Mr. Phillips joined the Daf Yomi chaburah in the shul, given by Yossi Gleiberman.

“I admit that I had two false starts with Daf Yomi, beginning the new machzor after the Siyum HaShas of 1990 and again in 1997, each time giving up shortly afterward,” Mr. Phillips told Hamodia. “But after hearing so many good things about Yossi’s chaburah, I finally decided to join, as they were beginning Maseches Sanhedrin.”

The commitment was difficult at first for someone who had not done very much serious learning. But committed he was, and day by day, Beryl progressed. Eventually, he even began filling in for Mr. Gleiberman as Maggid Shiur on days the latter was away.

When Beryl had finished half of Shas, in November 2013, he began looking forward to making a siyum haShas. He sent “save the date” cards to his chaburah members, friends and family, for his siyum haShas on 23 Tammuz 5777/ July 17, 2017.

With 300 days to go, Mr. Gleiberman, who works in the watch business, presented Mr. Phillips with a countdown clock, with the days, hours, minutes and seconds until his siyum haShas. As the clock ticked down, Mr. Phillips’ excitement was palpable.

“I wish I could bottle his enthusiasm for his learning and distribute bits and pieces to many others,” remarked Yossi.

Finally, on Monday night, 150 people gathered at Az Yashir Hall in Midwood to celebrate the big night, 2,711 days — and a lifetime — in the making.

A number of Rabbanim spoke at the event, about the joy and meaning of this occasion. If Beryl Phillips, a baal habayis celebrating his 65th birthday Tuesday, who had had two “false starts” in Daf Yomi, could devote himself so fully and enthusiastically to Torah study, indeed that is a great simchah — and a great lesson — for all.

“My chaburah has been an overwhelming contribution to my success in achieving this goal of finishing Shas for the first time,” Mr. Phillips said, after making the siyum. “They were encouraging and supportive, and I am indebted to them as well as to the Maggid Shiur.”

A siyum haShas itself is a joyous occasion, but Monday night was a celebration of yet another milestone: Three years ago, Mr. Phillips and his chavrusa, Zev Bienenstock, began a Hilchos Shabbos semichah program under Yeshiva Pirchei Shoshanim. Now, they had finally taken and passed their semichah exam and at the event, Mr. Phillips and Mr. Bienenstock were presented with their semichah certificates.

To top off a very special evening, Mr. and Mrs. Phillips celebrated their 13th wedding anniversary. (Beryl insists that he still wants to be called “Mr.,” not “Rabbi” — “at least until I get semichah in Yoreh Yoreh or Yadin Yadin,” he says with a chuckle. “I’m still a poshiter Yid.”)

Mr. Phillips related the story of Rabi Akiva and his wife, Rochel, whose sacrifices enabled him to dedicate his life to Torah.

“My wife has encouraged all my Torah learning, and I can truly say about her, as Rabi Akiva said about his wife: ‘Sheli — whatever Torah study I have accomplished, shelah hu — really is a credit to Pearl.”

In his remarks at the event, Mr. Gleiberman spoke of the lesson the evening should impart: Anyone who decides to dedicate himself to Torah — no matter his age or past challenges — can achieve great heights, whether in completing Shas, receiving semichah, publishing a sefer, or any goal he may set.

And learning Torah has remarkable effects on all facets of a person’s life.

“I knew Beryl as an acquaintance from many years ago,” Mr. Gleiberman told Hamodia. “Then he moved into the neighborhood, and became a neighbor. Now that we have learned together for so many years, I can finally say that he is a friend, and our friendship becomes closer every day. The closest relationships are ones formed through learning.

“I always like to say this vort: ‘V’ahavta l’rei’acha kamocha.’ How? By the next words: ‘Zeh klal gadol baTorah.’ When we learn with each other and tell each other vertlach and share simchos, we feel kinship with others. I am proud of Beryl’s accomplishments, and am thrilled at the closeness in friendship that comes about because of that.

“Beryl joined Daf Yomi at a later point than most people do, and that is sometimes a challenge. This is a hischayvus for everyone.”

Rabbi Chaim Kahan, a talmid chacham and close friend who proctored the semichah exam; and Rabbi Aharon Rakeffet, who has remained close with Beryl since being his Rebbi in 1971 in Beit Medrash L’Torah, also spoke, regarding their inspiration in seeing Beryl and Pearl’s devotion to, and success in, Torah.

Finally, attendees were informed to “save the date” for Dec. 18, 2024: the next siyum haShas, im yirtzeh Hashem, of this “poshiter Yid.”

On Tuesday morning, as usual, nearly 30 people were at Khal Zichron Mordechai bright and early. Yossi took his seat in front of the room, and Beryl took his near the far end of the second row. They opened to Maseches Sanhedrin.

The new cycle for Beryl had begun.