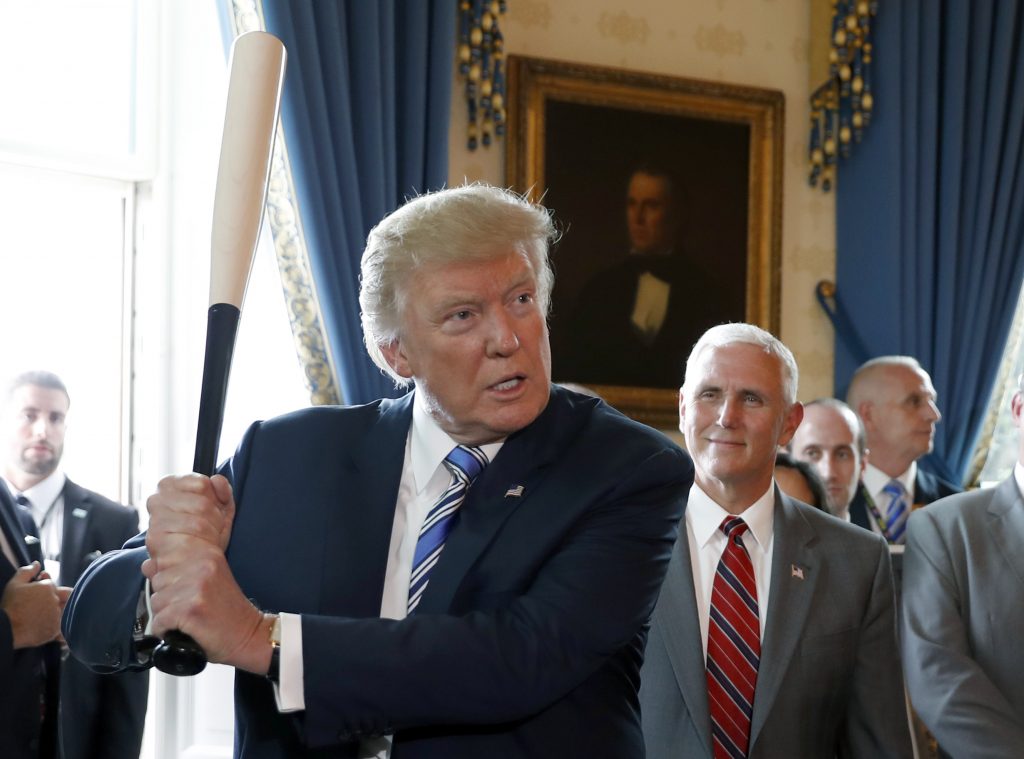 President Donald Trump vowed Monday to boost U.S. manufacturing by cutting the $64 billion trade deficit with Mexico as he showcased products made in all 50 states — everything from a fire truck to a baseball bat.

“No longer are we going to allow other countries to break the rules, to steal our jobs and drain our wealth,” Trump said at a White House event that spilled from the East Room to the South Lawn.

Shortly after Trump’s remarks, the U.S. trade representative released an 18-page report about its goals for updating the decades-old North American Free Trade Agreement with Canada and Mexico. In addition to reducing the trade deficit, the administration wants to insert a chapter on the digital economy into the deal. It also wants to strengthen labor and environmental obligations, as well as amending the rules of origin so that more of the products traded come from the United States and North America.

Trump is focusing on trade this week. Administration officials are to meet Wednesday with economic officials from China, a nation the president has accused of dumping steel on the global market to hurt U.S. steelmakers. The White House emphasis on trade follows a string of other recent theme weeks on energy, job-training and infrastructure.

The president took his time checking out products from all over the country: Trump donned a cowboy hat from Texas. He swung a baseball bat from Louisiana. And he even climbed into the cab of a Wisconsin-built fire truck and pretended to be a firefighter, saying, “Where’s the fire? Where’s the fire? Put it out fast!”

The new NAFTA objectives, a requirement to begin talks on updating the agreement in the next 30 days, contain the first specifics for a Trump administration that has made bold promises on trade. Trump has pledged to recover factory jobs and boost wages by crafting new trade deals. Supporters note that NAFTA enabled companies to charge cheaper prices for products that range from cars to vacuum cleaners, helping many U.S. consumers.

The president said he only seeks a level playing field for U.S. companies and workers, but “if the playing field was slanted a little bit toward us, I would accept that, also.”

But the president has a conflicted relationship with global trade. His namesake clothing business depended on the work of low-wage workers living overseas, as does the fashion line of his daughter and White House aide, Ivanka Trump.

As of now, Ivanka Trump’s firm continues to have its products made overseas. Her lawyer, Jamie Gorelick, said in a statement Monday that the president’s daughter “has resigned from the company, does not control its operations, and has been advised that she cannot ask the government to act in an issue involving the brand in any way, constraining her ability to intervene personally.”

Trump has blasted trade deficits as hampering the economy by sending money abroad. His administration already is pursuing multiple trade cases on individual products and is weighing whether to impose tariffs and quotas on foreign steel in hopes of curbing production in China, even though that country represents a fraction of U.S. steel imports.

Utah Republican Orrin Hatch, chairman of the Senate Finance Committee, said the administration’s NAFTA objectives “will be further developed as the negotiations proceed.” The senator said he wants stronger protections for intellectual property rights as part of an amended agreement with Canada and Mexico.

Democratic lawmakers said Monday that Trump should move away from trade agreements that favor multinational companies to focus on workers.

Rep. Debbie Dingell (D-MI) said that any new agreements must provide for more jobs and higher wages that he has pledged to generate.

“He’s got to deliver on those promises he made to my constituents and the working men and women across the country,” Dingell said in a phone call with reporters.