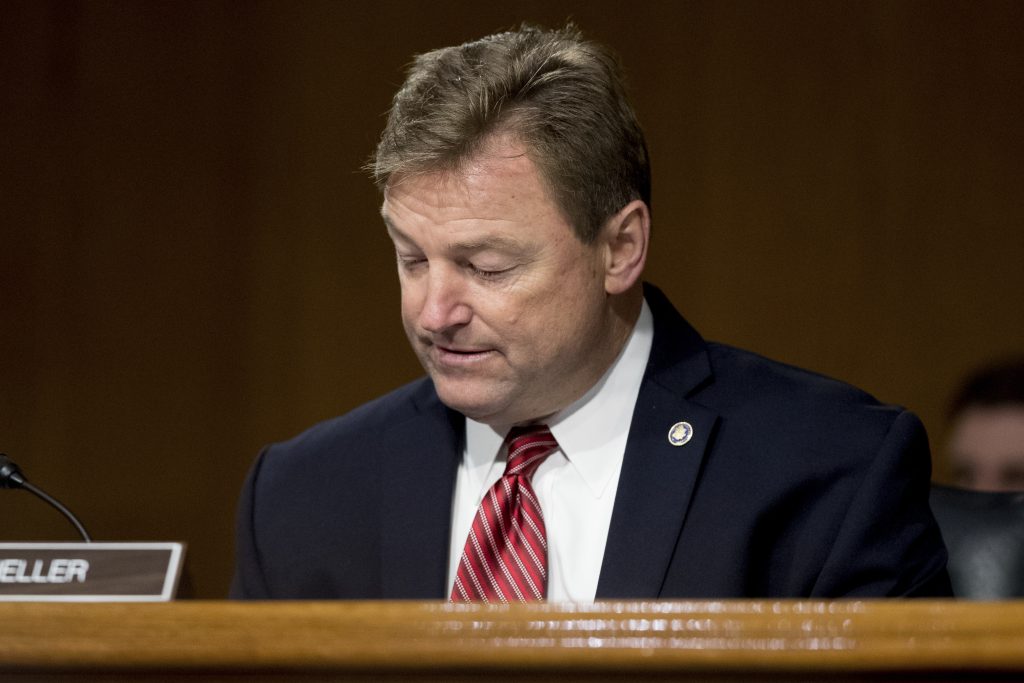 There was a break-in over the weekend at the Las Vegas office of Sen. Dean Heller, R-Nev., a Republican senator who could be a critical swing vote on the GOP health-care bill.

A “threatening note” was also left at the office after the break-in, according to 8 News Now, based on an anonymous source. Las Vegas police would not confirm any information about a note to local media outlets.

Megan Taylor, a spokeswoman for Heller, confirmed the break-in but said she could not comment because of an ongoing investigation.

Heller has been under tremendous pressure from both the left and the right on his vote on the health-care bill. Republican lawmakers have been steadfast for years in their promise to “repeal and replace” the Affordable Care Act, President Barack Obama’s signature measure — a pledge President Trump frequently invoked on the campaign trail.

However, as The Post’s David Weigel pointed out, Heller is the only Senate Republican facing reelection in 2018 in a state won by Democratic candidate Hillary Clinton last year. His unique position has made him the focus of several advertising campaigns trying to lobby for his vote.

Last month, Heller came out against an earlier iteration of the GOP’s health-care bill, becoming the fifth Republican senator to do so at the time. At a June 23 news conference, Heller said he was particularly concerned about potential cuts to Medicaid, as well as the impending loss of insurance for those struggling with mental-health and substance-abuse issues.

“I’m telling you right now: I cannot support a piece of legislation that takes away insurance from tens of millions of Americans and hundreds of thousands of Nevadans,” Heller said then.

Three weeks later, Heller is in no less a precarious spot when it comes to voting on the GOP’s new proposal to remake the Affordable Care Act, unveiled by Senate Majority Leader Mitch McConnell, R-Ky., last week.

Currently two Republican senators — Susan Collins, Maine and Rand Paul, Ky. — have publicly said they continue to oppose the GOP’s health-care bill. Just one more “no” vote from a Republican senator would mean the bill would not have the 50 votes it needs to pass.

When Sen. John McCain, R-Ariz., announced he needed to recover from surgery and would be absent from a vote Saturday night, McConnell said the Senate would postpone the vote.

The incident at Heller’s office follows similar incidents involving other GOP senators in recent weeks. Over the July Fourth recess, a protester was arrested outside the Tucson office of Sen. Jeff Flake, R-Ariz., after asking a staffer, “You know how liberals are going to solve the Republican problem? They are going to get better aim.” And an Omaha man was arrested this month after walking into an Iowa motorcycle shop and saying that he “could kill” Sen. Joni Ernst, R-Iowa, who was scheduled to visit the shop the next day.

The break-in also came just three days after the Federal Election Commission ruled that House and Senate lawmakers may now use campaign funds to pay for security upgrades at their personal homes — a change from previous rulings that required lawmakers to petition the panel on a case-by-case basis. But after warnings from House and Senate security officials in the wake of the shooting of House Majority Whip Steve Scalise, R-La., the FEC said that security upgrades now qualify as “ordinary and necessary expenses” lawmakers incur as part of official duties.

Security upgrades at congressional district offices are handled with taxpayer funding, and Congress is preparing to spend tens of millions more dollars to protect lawmakers and their staffs. All 435 House lawmakers are receiving $25,000 in emergency funding added to their annual office allowances to be used for any security purpose — a nearly $10.9 million expense that can be used to add bulletproof windows at district offices or to hire a private security guard for public events back home. And at least $5 million is earmarked for the House Sergeant at Arms to pay for security upgrades at House district offices that face threats or are considered vulnerable.

The Senate, which has fewer district offices to protect, has not yet allotted such money. Responsibility for securing Senate district offices, which are usually found in federal buildings or courthouses, depends on the location. If it shares space with a federal agency that also has a law enforcement responsibility, that agency likely provides protection. If the office is in a courthouse, U.S. Marshals likely provide security. But if the office is in a private building, a senator’s staff has likely made arrangements with local police or the building’s private security officers to keep an eye on the location.